The defection of the Anambra State deputy governor, Dr Nkem Okeke, to the All Progressives Congress, APC, within the week, has been waved away by the Anambra State Government as nothing of consequence, even as it describes it as unconstitutional, reports Jude Atupulazi.

The deputy governor had last Wednesday officially defected to the APC in a ceremony held in Aso Rock, Abuja, and attended by President Muhammadu Buhari.

The deputy, according to reports, took the decision to quit following the way he was treated by his boss, Gov Willie Obiano. Same reports claimed that he was often overlooked in protocol at events; as well as made to look redundant, with the wife of the governor often given prominence over him at functions and publications. 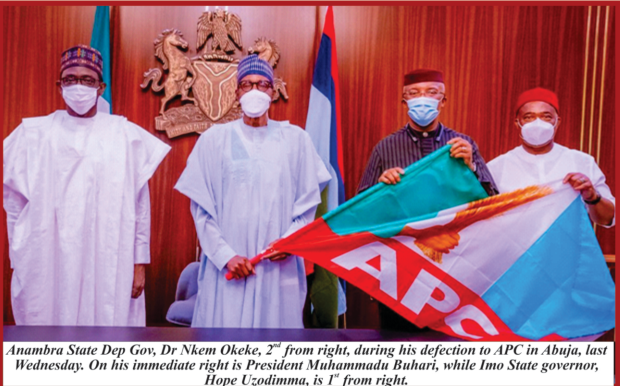 Matters reportedly came to a head when the deputy governor refused to represent the governor at the Southeast Governors Meeting in Enugu recently because no provision was made for his safety for the journey.

But in a swift reaction to the deputy governor’s defection, the Anambra State Government through the Commissioner for Information and Public Enlightenment, C. Don Adinuba, said that the defection of Dr. Nkem Okeke to the All Progressives Congress was unconstitutional.

It said the Anambra Government was elected on a joint ticket under the platform of the All Progressives Grand Alliance (APGA), with Governor Willie Obiano in 2013, and had their mandate renewed in 2017, and should therefore ‘follow the honourable path and resign from office’.

For his part, Barrister Ifeatu Obi-Okoye, Special Adviser to Governor Obiano on Political Matters, said the defection of the deputy governor, was politically inconsequential and non-sequitur to the fortunes of APGA, either in his electoral ward, local government, or at the state level, ahead of the November 6 governorship election.

Speaking further, Barrister Obi-Okoye said, ‘Evidently, Dr. Nkem Okeke’s drift to the APC is for personal pasture, more than any desire to serve the interest of Ndigbo. Whereas the APC may see him as a big catch, he remains a political paperweight in the politics of Anambra State.’

Contributing, Dr. Uche Nworah, Managing Director and Chief Executive Officer of Anambra Broadcasting Service (ABS), who is also the Spokesperson of Forum of APGA Political Appointees from Enugwu-Ukwu, said the forum and its members were not informed by the Deputy Governor about his defection, noting that they only learnt about it later like everyone else.

‘Like everyone else, we saw the viral pictures of the Deputy Governor, Dr Nkem Okeke, holding the APC flag at the State House in Abuja on Wednesday. We were disappointed because by virtue of his position in government, he is our political leader in Enugwu-Ukwu and Njikoka Local Government and never hinted us that he was leaving.

‘He is on his own in making that move. We are not in support at all. Enugwu-Ukwu and Njikoka will give their votes 100% to the APGA,’ Nworah said.

‘Every discerning Onye Anambra and, indeed, Njikoka and Enugwu-Ukwu, knows that he is completely on his own in making such a move. Thankfully, his defection does not in any way affect the fortunes of APGA in the coming gubernatorial election. APGA is still formidable in the four Wards of Enugwu-Ukwu,’ Ozumba stated.

Meanwhile attempts by Fides to get the reaction of the deputy governor hit a brick wall as Fides was told he had decided not to talk for now.

The deputy governor himself also told Fides when contacted that he would not talk, no matter anything being said against him.

For political watchers, however, the defection of the deputy governor is the biggest blow yet to the state government and the ruling party in the state. All eyes are now on the party and the government to see how they manage the latest high profile defection.

It will be recalled that many members of APGA and even state assembly members had in recent times dumped APGA for APC. But addressing media executives recently at the Governor’s Lodge, Amawbia, Gov Obiano said those defections were actually ploys by the defectors to collect money from APC. He said those people had been regularly leaking information from the APC camp to his government and party, APGA.

As the November 6 guber election hots up, the eventual result will prove the governor right or wrong.