It was a Monday and I was online, trying to read the news from different tabloids when I saw a post about popular Nollywood actress, Ada Ameh being dead after slumping, somewhere in Warri, Delta state. I immediately ignored it and seriously believed it was just one of those fake news items on social media that some bloggers post just to get traffic on their websites.

Of course, I cast my mind back to the fake news that spread like wild fire about Veteran actor, Pete Edochie being dead. It was so generally posted by different blogs that I would’ve believed them if I didn’t belong to several media groups that immediately tell you if certain information is real or fake. This lady in question, Ada Ameh was too vivacious, bubbly and fun-loving to be classified dead by anybody.

So I never imagined in my wildest imagination that she was really gone. Of course I ignored the post and went on to read other things until I went online to my NUJ ‎WhatsApp group and saw a post by one of my colleagues that Ada was dead. I immediately questioned if it was confirmed to be true and the answer I got was that it had already been confirmed. I felt pain.

I felt real pain for that amazing woman, who has passed through so much in her 48years and for also, going through that terrible ordeal and still came out of it, strong. I tried to imagine her at the age of 13 with an unwanted pregnancy out on the streets of Lagos without love from her family. I was also made to understand that the man who was responsible for her pregnancy was a naval officer, apparently living in the same barracks, just like her family.

Anyway, she carried her pregnancy to full term and gave birth to her baby. Thankfully, before the baby was delivered, her dad took her back in the house and took care of her and the pregnancy. Thankfully she was delivered her baby successfully, but shortly after that, her parents divorced. By the time she had her baby girl, she was 14 and at that very tender age, it she began her journey into motherhood.

Because of the slight age gap between Ada and her daughter, they become very close like two sisters. Ada wrapped her life around her daughter and they were like best friends, until she went for a tumor surgery in Abuja which she didn’t survive. News has it that after the tumor was removed, she spoke to her mum, but shortly after that, there were complications and the young girl died at the age of 32.

It happened during the COVID-19 lockdown which made it impossible for her to go to Abuja to see her daughter. I remember seeing a video she made, which went viral, where she was begging the federal government to allow her go and see her daughter. Anyway, the truth is that even before her daughter died, Ada had gone through so much that she was actually falling into depression. She lost 6 of her siblings.

Three brothers and three sisters. After that, she lost her father. That, in itself was a very big blow. In a post I read, her three sisters all died leaving behind 3 children each, which meant she was saddled with taking care of 9 motherless children! All these deaths didn’t go down well with the psychological and emotional state of this amazing woman. And yet, the world knew nothing about her pain.

She is seen hiding all that pain under the characters she plays in her uncountable movies, using them as a shield to hide her hurt and frustrations. It was the death of her daughter, Aladi Godgift that made her sink into the depression that killed her eventually. It is something nobody deserves to experience. You see, women most times, have special attachments or special bonds to some of their children because of certain ordeals they went through either during, before or after their births. 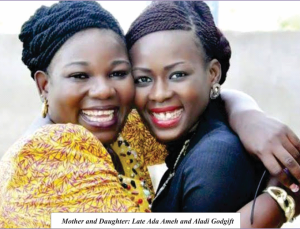 Remember that she did not impregnate herself. A naval officer who had his own family, was responsible, meaning that there was no hope of her being married to the man, even if she was of marriageable age, back then. She became a homeless pregnant girl with no education and no family and above all this, was buried in guilt  for being a disappointment to her family. In one of her interviews, she said that she was clothed in sorrow and shame for being the black sheep of the family.

After her daughter died, Ada sunk into the worst kind of depression you could ever think of. Her trauma went further than the psychological and emotional. It became mental. Recently, she was slammed with a law suit for not appearing in a movie she was fully paid for.

I remember the producers complaining online that other actors had arrived on set from their different locations but Ada was nowhere to be found and was not taking calls even though her air ticket was fully paid for. Watching the young man talk, he wasn’t really angry.

He was more worried than angry and complained that keeping the cast and crew an extra day in the hotel costs money, but that they were willing to wait to see if she would at least give them a call or even arrive location. I never followed up with that situation. It was when I watched that video by Ada where she spoke about having mental health that I heard her say that she was slammed with a lawsuit because she didn’t do the job she was paid for.

This is where I really have concerns. Not just for Ada, but for everyone who is reading this and has issues they are dealing with. Ada’s illness was nothing but depression. It is the worst form of mental sickness. This is where white people are better than us, because they believe in seeing shrinks.

They believe in seeing psychologists. They are encouraged from a very young age to talk about their problems instead of bottling them inside. That was what killed Ada Ameh. After going through so much, losing 6 siblings and a father, the only thing which she lays 100% claims to possessing, leaves her in a most shocking manner. At the age of 34!!!

She was a celebrity, so she probably felt there was no need opening up so people won’t know about her life’s struggles. Pride! I haven’t stopped telling myself that now that she is dead, her life history which she was trying so hard to conceal had now been brought to the limelight! So, what are we talking about? Towards the end of her life, she opened up a lot about her past. So, what was she still hiding???

I also know that she was very courageous till the end because I saw her video clip where she said that she was battling with mental health and it was trying to take her life, but that she would not die.She asserted that she would survive it and then, mentioned that a client slammed her with a bill, suing her, but her reason for not doing the job, was her mental health. She also stated that if she had told them about her mental issues, they would not believe her.

I remember watching a post where she celebrated her daughter’s posthumous birthday in October 2021. It was truly a touching thing to watch. She also visited her grave site in 2021 to commemorate her one year of death.

I see Ada as a strong woman who really wanted to leave her life happy and bubbly like she has always been. Her last video which was done over lunch in the home of her host family, said a lot about her kind of person. I guess the happiness she exuded in some ways, comforts me, knowing she was surrounded with love and family in her last moments. How was the family that she visited to know that her clock of death was ticking so fast , even as they laughed, wined, dined and giggled at her jokes. How were they to know?

Please, May I use this medium to appeal to all the Adas of this world to trust people more, in order to have the heart and mind to confide in them. A problem shared is a problem halved. You don’t have to bear your pain alone . This world is filled with so much hate, but I tell you, it’s also filled with people with so much love to share. All you need is to make good friends and lean on family.

It is the most powerful thing in the world. He who has family, has everything. For people like Ada who lost practically every member of her family, that’s where good friends come in. When that fails, there are psychologists and shrinks. They can actually help to see such people thru. May Ada Ameh’s beautiful soul rest In Peace. Amen!