As Nigerians marked this year’s Democracy Day last Sunday and the 22 years of uninterrupted democracy, the Anambra State Association of Town Unions (ASATU), the umbrella body of the 179 communities of Anambra State led by its National President, Hon Barr Titus Akpudo, expressed the hope that the nation could only get better, even as he urged Ndị Anambra to embrace agriculture.

Akpudo, while felicitating with Ndi Anambra at ASATU office domiciled inside Government House, Awka, described the country’s democracy as stable, noting that its foundation was strong and firm and that its future was bright. 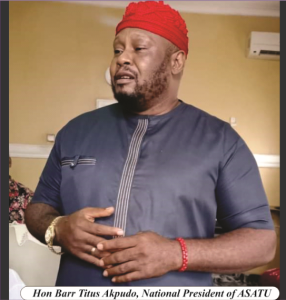 The ASATU boss who enjoined Nigerians not allow despondency to replace hope, commended residents and indigenes of the state for their unflinching support for Soludo’s administration and policies.

He charged the people of the state to continue to play their role in deepening democracy by actively participating in the electoral process, which, he said, had improved over the years.

Akpudo harped on the need for Ndị Anambra to embrace farming, stating that it was no longer news that Nigeria’s future lay in building a productive economic base in agriculture.

‘At every forum, both experts and non-experts, echo it that to wriggle out of the dangers of our mono-product economy or the current recession, we should look in the direction of agriculture to create jobs and reduce the high unemployment rate in the country and guarantee food security for over 250 million people of this nation.

He called on governments across all levels to begin campaigns geared towards bringing the youths and graduates of higher institutions into agriculture, advising the teeming unemployed youths to take advantage of the nation’s natural endowments such as large uncultivated arable land, good weather, good rainfall and soil fertility.