Madness is a mental disease by which someone exhibits the sense of abnormality. The Longman Dictionary of Contemporary English defines madness as “very stupid behavior that could be dangerous.” In other words, anyone who acts stupidly or foolishly is mad. Therefore, if someone says ‘stupid boy, stupid man, stupid woman or stupid girl’ it means that he or she is mad.

The Cambridge English Dictionary defines madness as “the state of being mentally ill, or unable to behave in a reasonable way.” In this case, the loss of reasoning faculty is total madness while partial loss of it is partial madness. What do we say of children who have not attained the age of reason? Are they also mad? No, but the potentiality of madness can be found in some of them.

The Collins Dictionary on its part defines madness as “a severe disorder that makes normal thinking and behavior impossible.” Today, many people in our society think abnormally. That is why insurgency and high cost of living have crippled us. It is the spirit of insanity that drives hoodlums to behead an innocent person. Our university students have been at home since the month of February 2022. 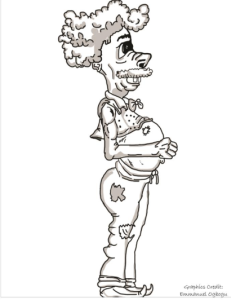 If the Federal Government and the leadership of ASUU think normally, our students would have gone back to school. If the politicians and the electorates think in a normal way, the 2023 general election will produce good leaders that would lead us to the Promised Land that has eluded us for years now because of corruption and bad leadership.

Madness overtook most party delegates at the recent concluded party primaries, which resulted in voting the highest bidders who oiled their palms with Naira and Dollars.

From the above definitions we can assert that everybody is mad in one way or the other. It depends on the degree of the madness. Even an angry person is temporary said to be mad. When we view the word ‘mad’ in the comparative and superlative forms we arrive at:  mad, madder and maddest.

Thus, I may be mad while you are madder than I. Someone else may be the maddest. As far as human beings are concerned, there is no one on this earth that is without any atom of madness in him or her. Two persons quarrelling or fighting are temporally mad. There is no difference between drunkenness and madness. Madness can be temporal or permanent, curable and incurable.

Some men of God suffer from spiritual madness when they curse and abuse people at the pulpit. They preach money instead of God. Ingratitude is also a form of madness. There was a newly ordained priest who was given a new Keke-Napep motorbike at reception for his pastoral ministry due to the poverty of the parishioners.

Could you believe that the priest rejected the gift and cursed the poor donors for insulting him with the ‘nonsensical gift’ after the rigorous years of his studies in the seminary? He shouted, “You people are very stingy! You and your children, generations after generations, will be poorer than church rat forever and forever!” The poor innocent people shouted, “Back to sender!!!” Making of political prophecy because of power or money inducement is also a form of spiritual madness.

It is not only human beings that run mad. Naturally, animals lack the sense of reason. They are controlled by instinct. Nevertheless they often run mad. We hear of mad cow, mad dog, mad cat, mad fowl, mad goat, mad fish, etc. What happens when someone eats the meat of a mad animal? Can the madness in the slaughtered animal affect the consumer? If a mad dog bites you, you start instantly to bark like a dog.

There was a case of a priest who was sent to Germany for further studies. Initially he could neither understand nor speak German Language. By then he made shopping by signs and wonders. For almost six months he was buying and eating dog foods from supermarket without knowing they were meant for dogs. Could you believe that after his studies he came back home and was posted to a parish for pastoral assignment.

He barked at anyone that approached him at all times. If ordinary dog food can produce such negative effect, then to eat the meat of a mad dog is very dangerous. Do you not know that the sickness that killed an animal can also harm a person who eats the meat of such sick animal? Butchers and hoteliers should help us. Sick and dead animals are not healthy for consumption. No wonder various mysterious illnesses have crippled many of us today.

Which is preferable: bodily or mental illness? Many prefer bodily illness because the sufferer can still reason normally. But a mentally deranged person does not reason well or reason at all. There was a mad man who cooked a live dog. After tying it with rope, he bundled it into a big pot of water and set fire on it. When the dog pot started boiling, he opened it. Behold the teeth of the dead dog protruded out.

The mad man harshly said to the boiling dog, “If you are amused, laugh alone. I am not amused myself.” For him the dead dog was laughing in hot water. He closed the pot sharply and put more firewood under the pot so that the laughing dog would stop laughing and die before he eats it. This degree of madness is very high.

Somewhere else, misunderstanding arose between two mad women in a market place. They were quarrelling over space occupation. One of them shouted to the other, “Get out of this place! Are you mad? Here belongs to me.” The sellers and buyers around laughed to the bone marrow.

They asked, “How can a mad woman ask the other mad woman if she is mad, when two of them are stark naked in a market place?” Do you still remember that sane elegant woman who was taking her bath and suddenly a mad woman came along and collected the clothes she hung on the wall? The bathing sane woman ran out naked and pursued the naked mad woman. Both of them ended in a market place. Who among the two is madder?

Sexual forms of madness are seen here or there nowadays. It is madness in its highest degree that drives adults to have carnal knowledge of infants or minors. Raping is acute sexual madness. It is rampant these days. Homosexuality, lesbianism and bestiality are sexual madness of the highest degree. Often times we see dirty mad pregnant women walking without destination.

Who impregnated them? Was it sane or insane men? There was the case of a married man who impregnated his two biological beautiful daughters who were still in secondary school. Within the same period, he impregnated his mother-in-law who came on a visit when his wife put to bed. His wife gave birth every year. He harasses sexually any girl or woman that he sees. His kinsmen decided to cure his sexual madness by castrating him. Since then he barks like a mad dog whenever he sees a woman.

My people say that a mad fowl has yet not encountered a drunken cat. I want to cap this write-up with the following quotes on madness: “In a completely sane world, madness is the only freedom” (J.G. Ballard). “To be sane in world of madness is itself madness” (Jean-Jacques Rousseau). “With madness, as with vomit, it’s the passerby who receives the inconvenience” (Joe Ortom). “We all go a little mad sometimes” (Joseph Stefano).

“What is sanity, after all, except the control of madness?” (Josephine Winslow Johnson). “Anger is a momentary madness, so control your passion or it will control you” (Horace). “Religious ecstasy is a madness of thought freed of its bodily bonds, whereas in the ecstasy of love, the forces of twin natures unite, blend and embrace one another” (Honore de Baizac).

“The world has always gone through periods of madness so as to advance a bit on the road to reason” (Hermann Broch).”Even if one understands that what one is doing is mad, it is indeed still madness” (Guillermo del Toro). A certain mad man said, “I know what I am doing, but what is happening to me I do not know.” Somewhere else, a mad woman said, “When I want to say one thing, another thing comes out of my mouth and that is why I am called mad woman.” This is enough food for thought for this week. Have a good appetite!