Following the sealing off of refuse dump sites by the Anambra State Government to check indiscriminate disposal of waste, residents of the capital city of Awka have turned to dumping refuse in drainages, bushes and waterways. They blame their action on the state government’s sealing off of designated refuse dump sites across the state without alternative arrangements, Chioma Ndife reports.

It will be recalled that the  Anambra State Government had earlier announced plans to ban street dumping of refuse with effect from September 30, 2022.

The Managing Director, Anambra State Waste Management Authority (ASWAMA), Mike Ozoemena, had in a meeting with environmental health officers across the 21 local government areas of the state, disclosed that house-to-house collection of refuse would be activated after the ban.

He revealed that about 31 contractors had been engaged to take refuse off the streets, stressing that the move was targeted at ensuring that the state became one of the cleanest in the country by December this year.

The policy however has not augured well with some of the residents who spoke with Fides as they sought clarification behind the sealing off of the existing refuse dump sites ahead of the ban date, describing it as counter productive.

They admitted being aware of government’s plans to replace street dumping with house-to-house refuse collection, but said they were yet to see the collectors within their areas.

Speaking to Fides, a retired civil servant, resident in Awka, Mr. Annaclatus Okpala, described the situation as  unfortunate and noted that it had introduced unnecessary stress on people who carried their waste about seeking for where to dispose them. He maintained that concerned authorities did not factor in the health implications of their actions before taking their decision. 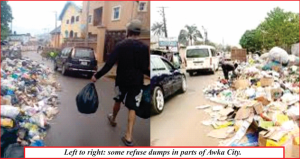 He said, ‘This is a dire situation as it has become unnecessaryly stressful getting a place to dispose refuse and I wonder where they want us to be disposing our waste. I was suprised the day I went to dispose my refuse only to discover that the place was sealed off. I saw some kids dumping theirs inside the gutter while I drove off with mine. Some people within my area have started making use of any available Bush.

‘I must commend the initiative behind the door-to-door collection and It is important that the policy makers ensure the effectiveness of the house-to-house arrangement before closing the existing dump sites entirely. The repercussionary effect of this decision will be overwhelming in no short time.’

Another resident who trades at First Market, Ifite, Awka, who simply identified herself as Chioma, said, ‘I learnt they said that the house to house collection would involve payment; that each flat will pay the sum of N3,000 every month for waste disposal. So as a shop owner, I wonder how much I will be paying and I don’t see the sealing off of the sites as the solution to dirty environment. For us to achieve a cleaner Anambra, alternative arrangements should have been made before the sealing off.

According to Mr. Evaristus Emeka, the initiatives was laudable; even though he advocated for more public enlightenment and sensitization by the media and various community leaders to ensure its effectiveness and success.

He urged other residents to key into the government policies for better a Anambra to be actualized.