The Obi of Onitsha, Igwe Alfred Nnaemeka Achebe has denied giving any direction to Igbos residing in the North to leave in their best interests.

Several reports on social media over the weekend claimed that the renowned Monarch had ordered Igbos in the north to leave because of the protests and turmoil in Sokoto State.

According to our correspondent the demonstration in Sokoto was sparked by the death and burning of Deborah Samuel, a female student at the Shehu Shagari College of Education, for supposed blasphemy. 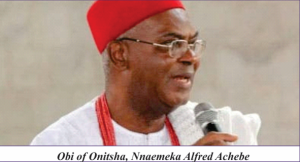 Protesters flocked to the streets on Saturday to demand the release of those detained in connection with the murder, trashing churches and other structures in the process.

The Monarch denied encouraging citizens of South-East background to leave the North and return home in a statement delivered by his Chief of Staff, Chinyelugo Anionwu on Tuesday.

He dismissed claims that he issued the instruction as false and unfounded, urging Nigerians to disregard them.

“The attention of Imeobi Onicha Palace has been drawn to a statement that His Majesty, Igwe Alfred Nnaemeka Achebe, Agbogidi, Obi of Onitsha, has called on every Igbo living in the North to come back home immediately.

“The statement that has gone viral on social media is fake and should be discountenanced,” the statement stated