…Sister Virginia was a Stickler for Discipline – Parents

The Catholic Bishop of Awka Diocese, His Lordship Most Rev Paulinus Ezeokafor, has described the sudden death of Reverend Sisters Virginia Obike and Monica Ilem; as well as Mr Chamberlain Umunakwe (Driver) and a husband and wife who were all burnt beyond recognition in a road crash, as painful and colossal, report Jude Atupulazi and Mmaduabuchi Onwumelu.

Rev Sr Obike, who was the Principal, and Rev Sr Ilem; Bursar, of Handmaids’ Secondary School, Amansea, Awka North LGA, and their driver, had been returning to Amansea in a Toyota Hiace bus belonging to the school from Ifite-Ogwari, Ayamelum LGA, where they went to purchase bags of rice for the school, late Tuesday, when their bus rammed into a Toyota Highlander carrying a husband and wife, and the two vehicles burst into flames, roasting all five to death.

According to a release by DRC Margaret Onabe, Ag Sector Public Education Officer of the Federal Road Safety Commission, FRSC, Anambra State Sector Command, the accident occurred at about 6.30 in the evening of last Tuesday during a heavy rain. 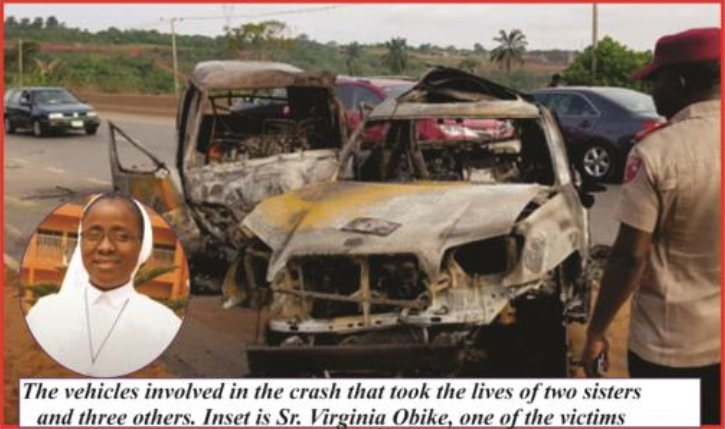 The Sector Commander Anambra State, Corps Commander Adeoye Irelewuyi, commiserated with the families of the dead victims and sent his prayers for the repose of their souls, even as he advised road users against going beyond the prescribed speed limit.

The death of the occupants of the vehicles had attracted widespread sympathies, particularly from those who knew the sisters.

Reacting immediately the news filtered in at St. Patrick’s Catholic Cathedral, Awka, Bishop Ezeokafor expressed sadness and grief, even as he acknowledged the inevitability of death in the earthly journey. He expressed deep shock at the news which he described as painful, unsavory and rude.

‘On behalf of the priests, religious, and lay faithful of the Catholic Diocese of Awka, I condole with the Handmaids’ sisters, the families, relatives and friends of the deceased. It saddens my heart that we lost such personalities that way. We seriously mourn their deaths. Imagine the husband and wife going just like that? The driver too.

‘The late principal was very hard-working and dedicated. She poured her heart out while serving the school. I am personally touched. Well, we cannot question God. He knows everything. Honestly, we never expected this type of crude and cruel news. I think the ongoing road construction and the rain contributed to their death. It is quite painful and regrettable,’ Bishop Ezeokafor said, while pointing out that the ongoing road construction on one lane had forced traffic to be concentrated on the other one, thus causing several accidents.

‘You see, I have to blame the ongoing road construction and the downpour. All the vehicles are passing through one lane, thereby making the traffic so much on the other one. Who knows, they would’ve been alive by now if the two lanes had been completed.

‘A lot of road crashes have taken place on that road because of the construction. They should expedite action. The rain that fell on that day didn’t help matters either. It could be that the wipers were not functioning, being that it had been long they were put into use,’ Bishop Ezeokafor said, praying for the quick repose of their souls.

In their reactions, some parents whose children are at Handmaids Secondary School, described the late principal, Sister Obike, as a stickler for discipline who wanted the best for her students.

Mrs Uchay Amunike, a media practitioner with Fides Newspaper, said Sister Obike had transformed her school beyond expectations through her dedication and firm administration.

Her words, ‘Sister Obike was an amazing woman. I met her when my daughter was admitted in the school. She was firm but kind. She was a vessel of transformation in her school. I’m still in shock over her death.’

For Mrs Joy Odinye, a journalist with Channels Television, Sister Obike was humane, down to earth and one who would always feel others’ pains.

‘She dealt with all the students as though they were her children. God knows why she had to go this way. She was strict and a disciplinarian who wanted the best for her students. On Sundays she wore her white dress and cooked food for the students. She did not joke with their meals. She was strict but had a good heart,’ Mrs Odinye said.

Fides understood that the bodies of the husband and wife involved in the accident have been buried already.