Even though years have run by, I still remember vividly my junior primary school days at Our Lady of Fatima Boys’ Primary School Jos in Plateau State. There was a dark huge boy with monkey face in our primary 2A. We considered him too old to be in our class. Thus we welcomed him with an emotional song titled “Baba Class Two!”  During recreation every day, as he walked out of the classroom, we followed him beyond mocking and singing, “Baba Class Two! Baba Class Two!! Baba Class Two!” He didn’t find the song funny.

Anyone he caught found it hot on that day. So, as we sang behind him, we maintained a long distance to be able to escape his chastising iron hands. He finished first and second terms with us. Unfortunately when the third term resumed he absconded. Perhaps we caused him sleepless nights. May God forgive us!

The primary elections of the various political parties at the state and federal levels have just ended. A little girl of about five years overheard that his great grandfather was travelling to Abuja for the presidential primary of his political party. She wondered why his great grandpa as old he is, was going for primary at Abuja. She courageously walked to him and said, “Old Daddy, you are too old to attend primary school now.

Why not you go to Old People’s Home and rest?” The great grandpa angrily pushed her aside saying, “Stupid girl. I am going for primary election and not primary school.” He hurried up and left home for Abuja with his teeming selfish supporters. Being a questionable billionaire, he bought his way through the primary election and was declared winner.

The Daddy Primary brushed her aside and retorted, “Get away, little idiot! You are too young to understand the huddles I scaled through to clench the presidential flag bearer of my great political party. With my strong connections I will succeed. Are you not happy that your great grandfather will become the President and Commander-in-chief of the Armed Foxes of the Federal Republic of Nigeria? The little girl in her honesty stated, “Daddy Primary, you are too old to become the President of a big country like Nigeria.” 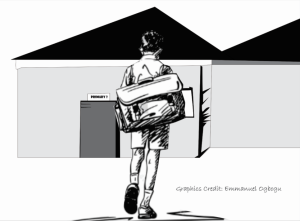 On hearing this, the great grandpa slapped her and shouted, “It seems you were sent! Get behind me little Satan!” The girl fell down and cried like heavy rainfall. The mother, who is the last daughter of the son of the Daddy Primary, came out as she heard her daughter’s cry. She consoled her motherly and then asked her, “My loving little daughter, what is wrong? Who beat you?” While sobbing heavily she replied, “Daddy Primary beat me.

He is very wicked.” The mother asked her, “Who is Daddy Primary?” She answered, “Mummy, he is my great grandpa. He went to Abuja for primary. On his return I welcome him with this song: “Welcome Daddy Primary! Because of this he slapped me mercilessly.” The sorrowful mother reacted with mixed feelings of anger and laughter.

Later she approached her old grandfather for clarification on the issue. After greeting and congratulating him for winning the presidential primary of his great party, she asked: “Daddy, my little daughter was crying because you slapped her.

What was wrong?” With deep hoarse voice and trembling hands he retorted, “Your little daughter and my great granddaughter is possessed. She is an obstacle towards my political ambition. Please go and cut her tails before she grows too wild. I don’t mind crushing her to death if she disturbs me again.”

Why is it that the old generation refuses to give chance to the new generation? Somewhere and sometime ago, I passionately went to a family to settle an inheritance dispute between an old mother-in-law and her young daughter-in-law.

It was centered on the right to ownership of the economic trees in their compound. The old mother-in-law was claiming ownership of the economic trees because she was still in charge, being the rightful married wife of her departed old husband. Coincidentally, her first son was the husband of the daughter-in-law in question and as such he was entitled to inherit everything in the compound from his late father.

The family squabble attracted my pastoral attention since they belonged to my sheepfold. In order to allow peace and equity to prevail, I shared the economic trees between the old mother-in-law and her daughter-in-law in the ration of 2 is to 3. That means, three shares to the daughter-in-law because of her young status and two shares to the old mother-in-law because she was about to expire.

The latter hesitantly accepted my judgment. On the other hand, the daughter-in-law was happy. Was I a righteous judge on this matter? Could you believe that as of today, the old mother-in-law, the daughter-in-law and her husband have all passed away? May they rest in peace! The disputed economic trees are still there till date. Oh, “vanity of vanities”, says Qohelet, “all is vanity” (Ecclesiastes 1:2).

I have come to understand that power, money and material possessions are temporal. At death the three passing things are left behind. No wonder my people rightly say, “Uwa bu a nawa a ghara.” Have you seen a powerful corpse? Some time ago, it was reported to me that a mighty and wealthy man from my parish somewhere in the past died and was deposited in a mortuary.

They convinced me beyond reasonable doubt that such a mystery never took place in the mortuary in question. The corpse was later brought home and I buried it without hearing of any disturbance from the corpse inside the casket.

Power, they say, corrupts, and absolute power corrupts absolutely. It is better to leave the stage when the ovation is still high. What matter are the legacies we leave behind at our departure from this passing world. The exemplary past late President of America, Martin Luther King, while addressing the citizens of America said, “Think not what your country can do for you, but what you can do for your country.”

Leadership at all levels is service to God and to humanity. It is not for self-aggrandizement. A corrupt leader corrupts quickly in the grave. Our country Nigeria has come of age but we are still crawling democratically due to corruption, injustice and bad leadership. We pray that the leaders that will emerge from the forthcoming general election in 2023 will take us to the long awaited Promised Land.

The old generation should give chance to the young generation in our democratic journey. Those who have served their usefulness should retire gracefully. The spirit of productivity must overtake the spirit of consumerism. If you are 18 years and above, have you obtained your Permanent Voters Card (PVC)? If not, why not? Delay is dangerous.