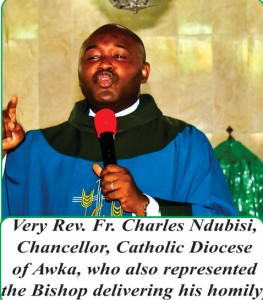 The celebration kicked off with a Holy Mass presided over by His Lordship, Most Rev. Paulinus Ezeokafor, Catholic Bishop, Awka Diocese. He was represented by Very Rev. Fr. Charles Ndubisi, Chancellor, Catholic Diocese of Awka.

Fides gathered that the World Youth Day is an annual event for young people which was initiated in 1985 by St. Pope John Paul II.

During the homily, Fr Ndubisi, who served as the National Youth Animator at Catholic Secretariat of Nigeria for seven years, spoke to the young people on the topic, ”Journey with God”.

In his message to the youth, Rev. Fr. Paschal Udo, Chaplain, CYON, Awka Diocese, advised young people to have the Catholic Conscience, saying that they should uphold Catholic values and morals.

He said, ‘The young people should be able to stand out. They should be different from people of society. They should also not allow society to influence them by modelling their lives as that of Christ.’

Augustine Chizoba Ubosi, President, CYON, Awka Diocese, appreciated the Catholic Bishop of Awka for declaring the year 2022, the year of the youths. He also made an appeal to patrons, guests and youths to support the upcoming training and empowerment programme the organization was planning for the youths in the Diocese.

Highlights of the events were Installation of patrons and patronesses, march past competition by deaneries, cultural dance, Cathedraticum, among others.

Winners of the march past competition were Agulu Deanery, Awka Deanery 1 and Nimo Deanery, as 1st, 2nd and 3rd respectively. 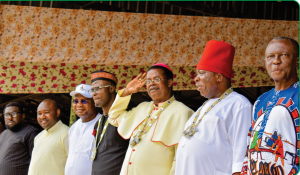 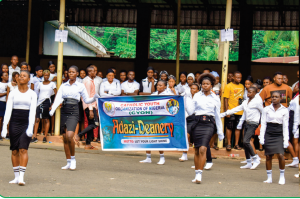 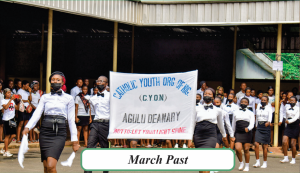