The Catholic Women’s Organisation of Nigeria (CWON), has concluded her 2020/2021 General Assembly hosted by the Onitsha Ecclesiastical Province in Awka Diocese. An occasion in which the women’s group launched the 25th edition of Women Echo Magazine, a publication of the organization, reports Precious Ukeje.

The national event which was held at the Archbishop A.K. Obiefuna Retreat, Pastoral and Conference Centre, Okpuno (ABAKORPACCO), Awka South LGA, Anambra State, from January 21-23, 2021, had “Eliminating Discrimination and Gender-based Violence”, as its major theme. 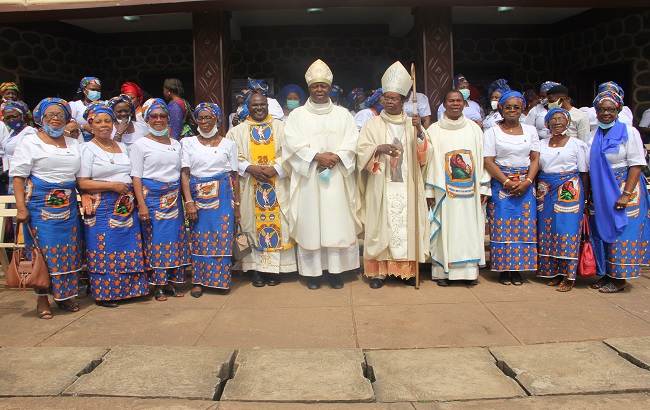 Chairman of the occasion, Chief Livinus Madubom, who was represented by Dr Barnabas Nwafor, Deputy Registrar, Federal Polytechnic, Oko, launched the Echo Women Magazine, while the organization also presented awards to some of its members and other guests who were invited to the plenary.

In an address presented at the general assembly, the National President, Barr. Mrs Cecilia Nwanneka Okolo, described the year 2020 as one like no other in living memory, noting that it began like every normal year until the coronavirus pandemic wreaked havoc in many countries.

She pointed that the CWON theme for 2021, “The Role of Women in Eliminating Discrimination and Gender-Based Violence”, was apt and timely, especially at a time when women and girls bore the brunt of the prevalent hardship.

Barr Okolo emphasized need for much work to be done in various capacities so as to create a violence free world for women and the girl child.

‘It is our mandate to protect fellow women from violence through discouraging a culture of silence. Women must speak out and condemn violence in all its ramifications,’ Okolo maintained, noting that victims of violence must be encouraged to speak out and seek help as it could save them from constant brutalization and even death.

Okolo blamed the pandemic for their inability to execute most of their plans for 2020, but expressed gratitude to God for the things they were able to achieve, with importance placed on family apostolate by the administration she led. 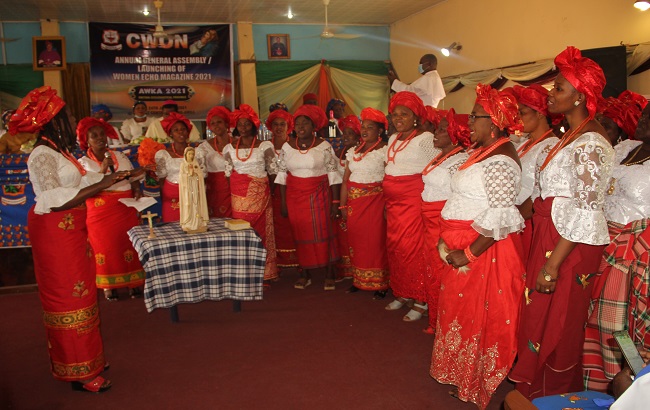 Some members of CWO, Awka Diocese, rendering the welcome song.

She listed a couple of her administration’s achievements, especially the commencement of academic activities at their school, Cor Mariae Boys’ College, Abuja; and lauded the efforts of all the committees that worked with her, as well as appreciated their supporters, especially in the launch of the magazine.

Contributing, the President of CWO, Onitsha Ecclesiastical Province, Dame Helen Chinyere Ezeogu, in an address of welcome, appreciated the Catholic Bishop of Awka Diocese, Most Rev Paulinus Ezeokafor, and the Catholic Bishop of Enugu Diocese, Most Rev Calistus Onaga, who led in the concelebrated Holy Mass and gave the homily at the Mass of the event, for their support and fatherly love.

She lauded the national president for her wealth of experience which she used to position the organization in a good light, nationally and internationally. This was even as she commended other executive members for the crucial roles, which she said, they played in the successes achieved by the Barr Okolo-led administration. 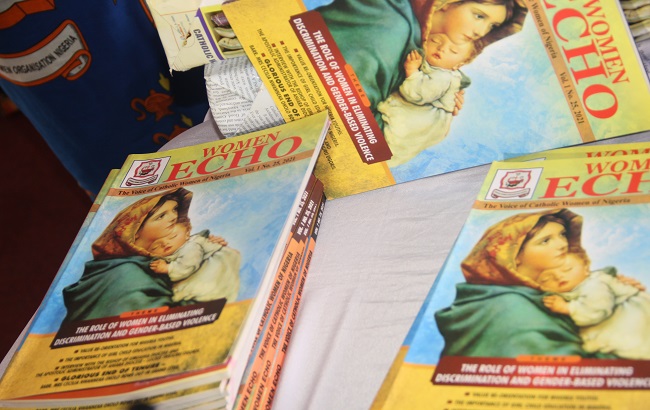 Some copies of the 25th Edition of the CWON Women Echo Magazine, launched at the event.

Dame Ezeogu described Igbo people as hospitable and assured all delegates of a beautiful event in Awka.

Chief Madubom, Chief launcher of the magazine, in his remarks, said he felt good identifying with the CWON and lauded the co-launchers. He made donations in his name and that of some of his friends.

The conference which was earlier scheduled to hold last year, 2020, was shifted to this January, owing to the prevalence of the coronavirus pandemic.