It also featured lighting of the candle, unveiling of the statue of Holy Mother Mary, presentation of Dedicated Service Award to some individuals and inter-parish queen pageant competition. 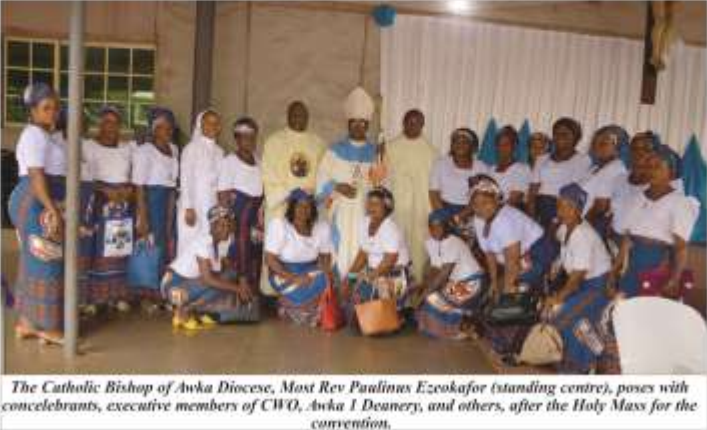 In her address of welcome, the Organiser, CWO, Awka 1 Deanery, Mrs Victoria Okoli, thanked God for his sustenance of the deanery since December 18, 2011 of its existence.

The organiser, announced the plans of Awka 1 Deanery to, after the convention, engage in money yielding ventures such as farming, poultry and fishery, so as to strengthen its financial strength.

She solicited for donations from all to enable the CWO to actualize the above projects, as well as her need of a coater bus for evangelization. According to her, the 48-seater coaster bus estimated at N80m would, in addition, be used for hiring purposes and serve as another source of revenue for the group.

Mrs Okoli explained that the CWO also engaged in charity apostolate such as assistance to her widow members, prisons’ visitation and motherless babies’ visitation.

Speaking on the occasion, the Director, CWO, Awka Diocese, Lady Sabina Ngozi Ndigwe, encouraged the mothers to live to their primary responsibilities in their families, as well as be active members of the CWO.

Earlier when he led in the concelebrated Holy Mass for the event, the Catholic Bishop of Awka Diocese, Most Rev Paulinus Ezeokafor, in his homily, charged mothers to live up to their primary responsibilities in the family, which, he said, included proper formation of the children and care of their families.

Blessing the candle for the lighting of the candle activity, the Catholic prelate enjoined all to, as Jesus Christ, the light, be embodiments of good works and shine out as light for others.

He described the candle as the light of Jesus which illuminated the dark portions in human life and society. The bishop maintained that it was necessary that light overshadowed darkness for the good of humanity and society.

Fides reports that despite the rainfall, a good number of individuals attended and donated in support of the CWO projects. Among them were the PDP candidate for 2021 Anambra governorship election, Mr Valentine Chineto Ozigbo, and the Accord Party candidate for the same election, Dr Godwin Maduka, as well as the awardees. Mr Ozigbo was represented by a former member of the Federal House of Representatives, Rt Hon Eucahria Azodo, while Dr Maduka was represented Hon Mrs Virginia Okeke.