Cubana Emerging Oba Economy the Rest of us

Some weeks back, the quiet town of Oba in Anambra state witnessed what could be termed the greatest fanfare ever witnessed in the history of the town. It was the burial ceremony of the late Matriach of Iyiegbu family, Ezinne Uche Iyiegbu. She was the mother of billionaire Obinna Iyiegbu, popularly known as Obi Cubana. Nigerians interpreted the burial activities in different languages.

Some called it lavish, some described it as obscene, some others called it insensitive. The Naira rain was spectacular and money truly flowed. Some people condemned the show of wealth, accusing him of being a ritualist. Some others praised him for giving his late mum a befitting burial. 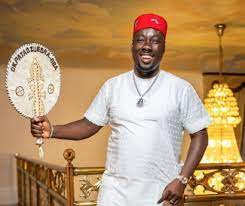 Either way, Obi Cubana was talk of the town for a while and still is. Today, my dear friend, Ikeddy Isiguzo gives his own analysis on this issue and I just couldn’t help sharing it. I hope you enjoy the deep thoughts of a very cerebral man who calls himself a major commentator on minor issues. I hope you enjoy it as much as I did…

Cubana, Emerging Oba Economy, the Rest of us

Nobody understands what happened at Oba when Obi Cubana, whose emprise embraces entertainment, interred his mother Ezinne Uche Iyiegbu. It is futile trying to make a sense of the splendour of the carnival in a hurry.

Debates will continue for years about what Cubana intended to achieve. That itself would be part of the assumptions that Cubana conceptualized this show and pictured the outcome. We would be giving him too much credit to have so imagined.

Oba was awash with money, moneyed people who were falling over one another to press their presence. There was a shortage of space in every sense of it – particularly shortage of space for the money sprayed to hit the floor already appropriated by earlier donors in currencies to procure acclaim to their fame.

It was an economic as well as social event. Possibly close to N1 billion was injected into the South East economy with some spreading to the North, South-South and South West.

The multiplier effect is worth exploring.

Here are some maths about Oba –

Chinua Achebe in his 2012 book There was A Country stated thus about Ndigbo, “I will be the first to concede that the Igbo as a group is not without its flaws. Its success can and did carry deadly penalties: the dangers of hubris, overweening pride, and thoughtlessness, which invite envy and hatred or, even worse, that can obsess the mind with material success and dispose it to all kinds of crude showiness.

There is no doubt at all that there is a strand in contemporary Igbo behaviour that can offend by its noisy exhibitionism and disregard for humility and quietness”.

His position is short of the standards in Oba. Achebe could not have imagined the extents of upgraded version of his view of our people. Dim Chukwuemeka Odumegwu-Ojukwu, General of the People’s Army, Ezeigbo Gburugburu, not in a retort to Achebe, once said he would be worried if people did not fear, respect or hate him. What should bother Ndigbo is their relevance in society. There would be important messages to pick up from the criticisms. They are useful in a Nigeria that delights in defying logic.

The audacity of Oba shut off other conversations on the social media.

Nigerians would be startled by the counter narratives the burial pushed – insecurity in the East, dependence on governments, resources that are still within us, and tribunes we erect for the departed. More importantly, it was a private affair drawing from private resources for its execution.

Are there crooks in the South East? Yes, and elsewhere too. Should they be encouraged? No, everywhere they are found.

Less bias is required to study the emerging Oba economy away from the trite explanations that illiterate traders who happened on money, however they did, came to Oba for attention.

Harvard’s attention is already on the Igbo Apprenticeship System, IAS. Professor Ndubuisi Ekweke, inventor, entrepreneur, and Harvard Business Review Writer defined IAS as “… a business philosophy of shared prosperity where participants co-operatively participate to attain organic economic equilibrium where accumulated market leverageable factors are constantly weighted and calibrated out, via dilution and surrendering of market share, enabling social resilience and formation of liveable clusters, engineered by major participants funding their competitors, with success measured on quantifiable support to stakeholders, and not by absolute market dominance,” in an April 2021 article in Harvard Business Review.

IAS is the centre of Cubana and his associates. They work hard pulling others up through mentoring and setting up businesses for them. Cubana just donated N300 million, N1million each, to set up 300 Oba youths in business. Those who know, say he regularly sends people to school among other philanthropic acts.

Negative narratives arrayed against the South East were rapidly extended to Cubana whose parents were teachers. He schooled at Dennis Memorial Grammar School (DMGS), Onitsha, graduating in Political Science from the University of Nigeria, Nsukka. Many in his crowd hold more intimidating academic accomplishments though some may not.

The same South East denigrated as all money and no education, has the highest marks for admission to Federal Government schools, 139 to 9 for some states.

Cubana – I won’t do what he did, I don’t have the resources, not just money but the socialisation involved – set out to celebrate his mother, with his resources, his friends. We are gasping at the immensity of Cubana’s resources, including the implausible expenditure.

The East has a lot it can harness through new thinking that ignores the shenanigans of obtuse politics. What will the East make from the reminder that there is more, a lot more, in us?

Oba, an otherwise sleepy settlement, a breathing distance from Onitsha, seized the social media. What next will the Oba economy do?

If you are concerned about the obscenities of Oba, remember we mourn differently. Cubana was mourning the departure of his mother, differently.