Land/shop owners at New Auto Spare Parts, Nkpor, Idemili LGA of Anambra State, are spoiling for a fight over what they termed the unilateral decision of the leadership of the market to build additional shops on top of the existing ones; a decision, the land owners say, is fraught with danger, reports Jude Atupulazi.

Addressing newsmen last Monday at New Auto Spare Parts, the protesting land owners, who displayed placards with varying messages, accused the Elysius Ozokwelu-led executive of the market union of not consulting them before taking the decision to build more shops on top of existing ones, expressing the fear that such could lead to building collapse as the foundations of the shops were not designed to carry more structures; even as they wondered where those who would occupy the new shops would park their cars.

He recalled that it was in 1989 that the land owners developed the land at the present site of the market and built shops there without government help. He said theirs was a privately owned market and that they had never defaulted in paying their taxes.

Ofole however said they were surprised when they were told at a meeting the previous week that plans had been concluded to build more shops on top of the existing ones, even when they had not been consulted.

‘We complained against this and wrote letters to the Assistant Inspector-General of Police (AIG) in charge of Zone 9, as well as to the Commissioner for Trade and Commerce. The AIG invited us and at the end of the meeting with both sides, said work on the proposed new buildings should not go on,’ Ofole recalled. 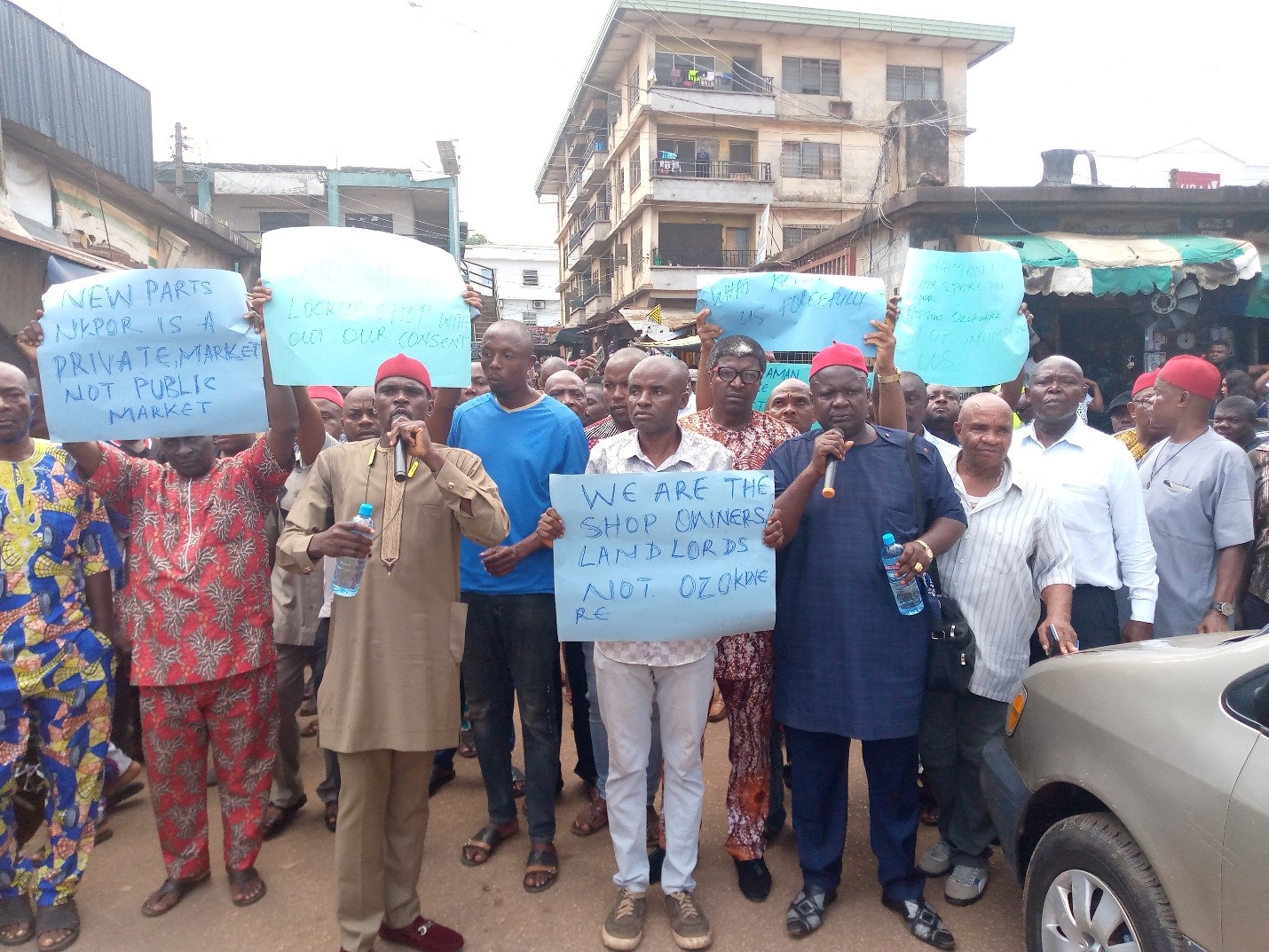 Traders at New Auto Spare Parts, Nkpor, Idemili North LGA of Anambra State, protesting against plans to construct new shops on top of existing ones without their consent. Dateline, June 7, 2021.

He however expressed surprise that after the meeting, the market leadership went ahead to start collecting N20, 000 from traders to be paid within two weeks, while they would pay N1.2m after three months.

Ofole, whose group marched round the entire market, telling their story and asking traders to go and take back their money, insisted that the right thing must be done by discussing whatever plans the market leadership had with those who owned the land and warned that they could institute a legal action if the authorities refused to listen to them.

They appealed to Gov Willie Obiano to intervene before matters got out of hand.

For his part, another stakeholder in the market, Mr Paulson Emerah, expressed regret that those he called crooks had taken over the market which was handed over to them on completion to manage. He urged the traders who had already started paying, to go and demand a refund of their money; even as he accused the union leadership of trying to cripple the business of young traders.

Attempts by Fides to get the reaction of the chairman of the market union proved abortive as he failed to pick his calls after initially asking for and obtaining the identity of his caller.

When however Fides called the Trade and Commerce Commissioner, Uchenna Okafor, on the phone, he said he was aware of the issue and had actually directed the union to stay action on its plans until he returned from his trip to Lagos.

‘I’m aware of the issue. I know how to handle it. When you hear from different people, you’ll need to go and find out the true position. I’ll go there for a town hall meeting when I return from my trip to Lagos. I’ve asked them not to go ahead with their plan,’ the commissioner said, offering to take this reporter along with him to the meeting.

Fides understands that the New Auto Spare Parts Market, Nkpor, has about 2000 traders with about 1, 008 stalls.