CP Ali welcomed the Coordinator stating that the Nigerian Police Force maintain good partnership with the NYSC, which  tells many success stories of the past, present and future. 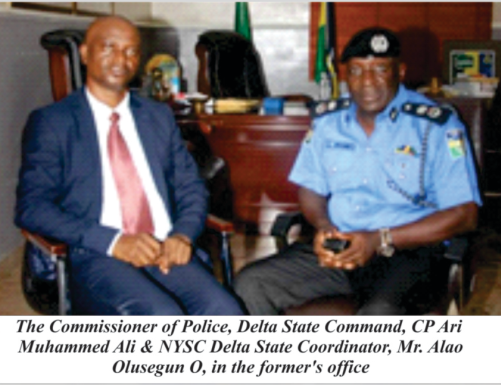 ‘NYSC Delta State has a good working relationship with the Delta State Police Command and I look forward to having a more robust collaboration with the NYSC, in my tenure,’ The CP stated.

The Police Boss described NYSC as a wonderful nation building scheme, that should be sustained and not scrapped. He stressed that the NYSC has always been in the forefront of national integration and unity. offering a viable platform for graduate youth to participate in national service in cultures or states, other than their own, culminating in inter-ethnic marriages and stronger ties

However, he charged corps members to improve on their level of security awareness, avoid hostile and volatile areas in the state and always inform their colleagues about their movement. According to him, no society is crime free hence the Police work to checkmate crime and criminal activities