The event which took place at Yayale Ahmed Hall of the Public Service Institute of Nigeria, Abuja was organised to train officers of the Scheme in the act of Citation and Report writing as well as address, observed shortfalls in the quality of citation and briefs submitted from the State Secretariats as has overtime been observed by members of the National Selection Committee (NSC). 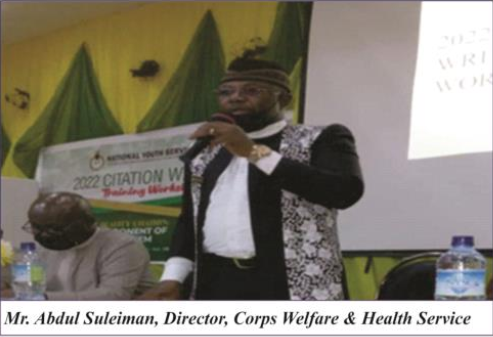 The central theme of the training workshop was: Imperatives of Quality Citation: A Critical Component of Corps Reward System.

The workshop declared open by the Director, Corps Welfare & Health Service on behalf of the Director-General, had in attendance the Director, Human Resources Department, H.M. Bappah (Mrs.), the host State Coordinator, FCT, Mr. Abdul Suleiman, Staff Members of the Department as Facilitators and two (2) Officers each from the 36 States of the federation  and the FCT.

Apart from the three key papers which revolved round the theme of the training exercise, participants were taken through a rigorous practical citation writing steps. There was presentation of notable documented observations of the National Selection Committee in the previous selection processes.

From the Key Performance Indices, the training exercise even though tasking but interesting, achieved all set objectives. The department would take steps to integrate all trained officers into the Honours Award process in all the Secretariats nationwide.

It is expected that this noble initiative will rub off positively, going forward, on the President’s NYSC National Honours Selection.

The highlight of the event include recognition of participants appointed to serve in various capacities during the training exercise.