The National Youth Service Corps, through its Acting Director-General, Mrs Christy Uba, has called on corps members employers nationwide to improve on their welfare and security, as well as create a conducive environment at their various places of Primary Assignment.

The call was made during the 2022 Corps Employers Workshop which held simultaneously in all the states of the South East with the Theme, ”Archiving Improved Productivity of Corps Members through Enhanced Welfare and Security During the Service Year”. 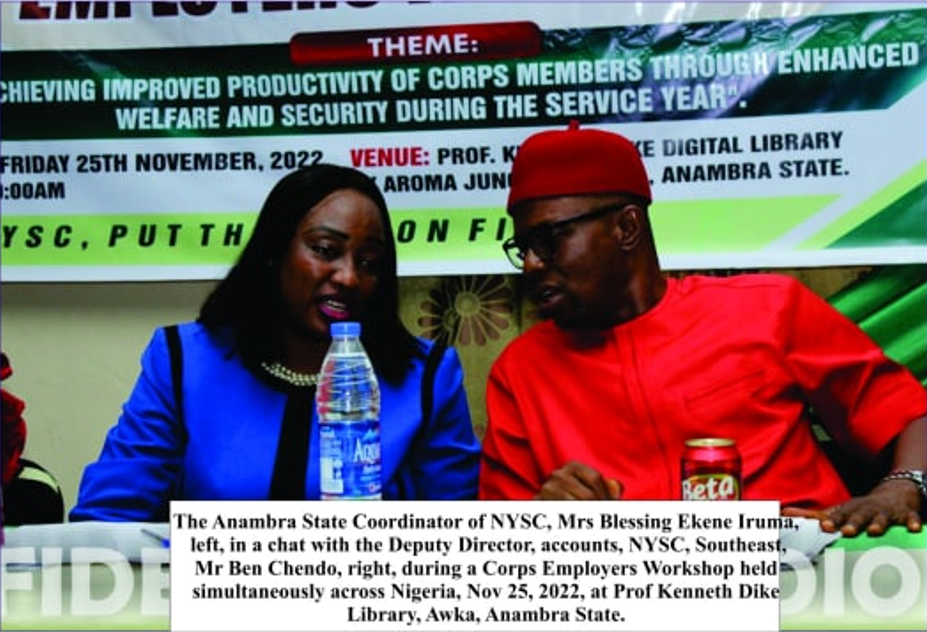 Mrs. Uba, represented by Mr. Ben Chendo (Deputy Director, Accounts) at the South East Area Office, presented the Acting Director’s keynote address. He appreciated the corps members’ employers, whom he described as critical stakeholders, for always standing by the scheme.

He said that this year’s workshop was aimed at giving corps members’ employers the opportunity to brainstorm and assist the scheme to provide workable solutions to such challenges as lack of accommodation at places of primary assignment, lack of transit lodges in  states and local governments, proper monitoring of corps members and security issues.

He stressed that the quest for improved productivity was at the heart of the workshop, noting that corps members possessed the skills needed to cushion the challenge in the educational, health and agricultural sectors in the state and country.

Mr Chendo encouraged employers to create conducive environments for the corps members at their various places of primary assignment, as well serve as role models to them.  He added that the workshop was aimed at reviewing the operations of the scheme and identifying areas of low performance with a view to proffering realistic solutions.

Chendo gave some of the challenges confronting corps members as economic recession, insecurity, lack of accommodation at their places of primary assignment, inadequate remuneration and lack of transit lodges at the state and local council levels.

In the same vein, the state coordinator, Mrs Blessing Ekene Iruma, welcomed all present and stated the importance of corps members’ employers to the NYSC scheme and appreciated their cooperation and support in the success and growth of the scheme in the state and nation at large.

She said the essence of the workshop was to enhance and improve the existing good relationship between the NYSC, Anambra and the corps employers, which, she said, improved the fortunes of corps members under them; even as she urged all to be open to providing suggestions, solutions and ways to enhance the welfare and security of the corps members during the service year.

Mrs Iruma requested for an upward review of allowances paid by corps employers to N10, 000 monthly.

The workshop was attended by corps members and employers in Awka Zone, as well as other critical stakeholders.

Highlights of the event were a cultural dance presentation by the NYSC dance troupe, presentation of papers, ranging from, “How to improve Welfare and Productivity of Corps members in the workplace”, by Dr Mrs Ofor, “Role of Stakeholders in the Challenges of Corps Administration”, by Mrs Ngozi Nwoke, Paper Reaction from employers, to presentation of resolutions and recommendations.