The corps member stated that his passion to assist the less privileged made him partner with a Jos-based Non-Governmental Organisation – Beautiful Gates, which produces and gives out wheelchairs free to physically challenged persons.

NYSC Nasarawa State Coordinator, Abdullahi Ahmad Jikamshi, while inaugurating the wheelchairs, commended the Corps Member for his gesture of ameliorating the suffering of the beneficiaries.

He said NYSC Community Development Service, CDS, Programme was specially designed to take the Scheme’s contributions to and improve the living standard of members of the public especially at the grassroots. 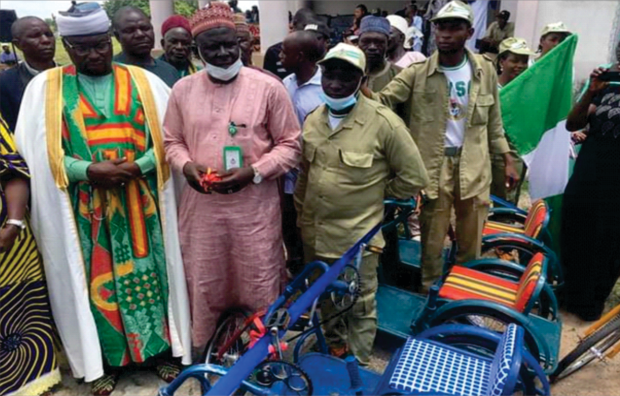 He urged other corps members to emulate Madugu’s efforts by initiating programmes and executing projects that would have positive impact on the lives of members of their host communities, especially the indigent.

Jikamshi enjoined the beneficiaries to use the wheelchairs positively adding that, though Nigeria had been declared polio free, parents should ensure that their children are vaccinated against childhood diseases, including polio to prevent diseases that may lead to physical deformities.

Also speaking at event, the Chief Executive Officer of Beautiful Gates, the NGO that released the wheelchairs to corps member Madugu, Engr. Ayuba Gufwan, who is also wheelchair bound, urged the beneficiaries not to see their physical disabilities as a challenge that would limit them to lives of begging for alms.

He told them that there was ability in disability, pointing out that with the provision of the wheelchairs, they could carry out many activities, including schooling, commercial activities and handicrafts, to empower themselves economically and live meaningful lives.

The traditional ruler of the area, the Yakanaje of Uke, His Royal Highness, Alhaji Dr. Abdullahi Hassan, who was represented by Hussein Danladi, the Chief of Kampani Community, commended the corps member’s efforts and thanked the NYSC for facilitating community development initiatives by Corps Members.

The ceremony also featured the distribution of textbooks to various Primary and Secondary Schools within Karshi by some Community Development Service Groups of corps members.