Cool Down, Soludo Urges, as Insecurity Persists in Anambra

The governor of Anambra State, Prof Chukwuma Soludo, has called for calm by the people of the state following renewed attacks on people and public facilities in the state by hoodlums suspected to be elements of pro-Biafra group, Indigenous People of Biafra, IPOB.

Soludo’s call is coming in the wake of the threat by the hoodlums to attack some more local government secretariats in the state and also shortly after he visited and spoke with Nnamdi Kanu, leader of IPOB, in Abuja where he is being detained.

In a statement signed on his behalf by his Chief Press Secretary, Mr Charles Aburime, Soludo, told the people of the state not to panic over the gunmen’s threat to attack local government areas in the state.

The statement, titled, ”Re: Threat of attack on 10 LGAs in Anambra State”, urged the people to go about their lawful businesses without any fear or molestation. 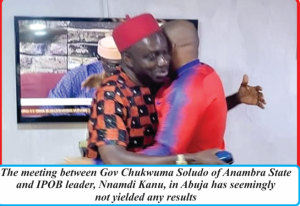 It read in part, ‘The attention of the Government of Anambra State has been drawn to an anonymous threat letter being circulated in the state of a planned attack on 10 local government areas in the state.

‘The anonymous letter, no doubt, is intended to create tension and fear among the peace loving people of the state.

‘The government assures the good people of Anambra State and residents of their safety and protection as security agencies are jointly working round the clock with government to maintain law and order.’

Meanwhile, despite the visit of Anambra State governor, Prof Chukwuma Soludo, to the leader of Indigenous People of Biafra, Mazi Nnamdi Kanu, in the detention facility of the Directorate of State Services (DSS), Friday, May 13, insecurity has persisted in the state.

Soludo had visited Kanu in Abuja and in a social media post he made, stated that the IPOB leader was unhappy with the insecurity pervading the Southeast.

While many thought the visit would make some elements perpetrating insecurity in the Southeast, especially Anambra, to soft pedal, Fides reports that just two days after the visit, the number of cases of insecurity in the state rather increased.

On the following Saturday, Sunday and Monday, attacks on innocent Anambra people were launched, with a local government secretariat and office of the Enugu Electricity Distribution Company (EEDC) and courts torched.

On Sunday, suspected arsonists burnt down Idemili North Local Government secretariat in Ogidi and a Magistrate Court in the area too.

Sources said the arsonists entered the premises on Sunday night to carry out the act, burning down all files and property in the secretariat, including the secretariat building.

Videos and pictures circulating online also showed that the entire buildings were reduced to rubble, while vehicles parked inside the local government secretariat were also burnt.

The state Police Command had also confirmed the development, attributing it to unidentified arsonists.

Sources said the shooting which started at about 10pm, lasted till late into the night, with bullets flying in the air, while expended shells dropped on roofs of residents in torrents.

It was gathered that the shoot out started after the unidentified gunmen took the battle to the door step of the military in a spot where they were stationed within the estate.

A resident of the area said they were scared stiff all through the night as sounds of gunshot rent the air.

She said, ‘It is true. Yesterday night at Housing Estate gate, unknown gunmen attacked the military men securing us. There were three hours of shooting. My estate was hot from 10pm to 12am last night. Call your colleagues living at Onitsha to confirm.’

It was learnt that the gunmen also visited the Government Reserved Area (GRA) in Onitsha, where they also shot intermittently.

At Amansea, a border town between Anambra and Enugu States, gunmen numbering about seven and wearing hoods on Monday mounted guard to enforce compliance of the Monday sit-at-home directive earlier instituted by IPOB but which they later said they had banned except the days Kanu would appear in court.

A man, Mr Ekene, who drove his sick mother from Oji River, a border town on the Enugu flank, to Awka, to meet up with a doctor’s appointment, told this reporter that he was saved by the sight of his mother who was lying on the back seat.

‘About seven of them were on the road, but when I told them I was taking my sick mother to the hospital, they let me drive by,’ the man said.

On Sunday evening, Mr Okechukwu Okoye, a lawmaker representing Aguata Constituency 1 in the State House of Assembly, was kidnapped. Okoye is an indigene of Isuofia, the same community as Gov Soludo.

DSP Tochukwu Ikenga, the Police Public Relations Officer of the Command, confirmed the kidnap while speaking with journalists. He said the lawmaker’s black Sienna bus, which he was driving before the incident, had been recovered.

Most other incidences of insecurity listed above were also confirmed by Ikenga, who disclosed that two persons said to be enforcing compliance to the Monday sit-at-home were yesterday gunned down by police operatives.

‘The operatives neutralized two of the miscreants and recovered a white Toyota Hiace bus with no registration number.’

Ikenga further stated that the miscreants were obstructing the movement of innocent road users going for their businesses when they were accosted by the operatives.

‘The hoodlums forcefully collected motorbikes and tricycles, chased away the passengers and then set the motorcycle or tricycle ablaze.

‘The Command operatives have intensified patrol within the state and the situation is being monitored,’ DSP Ikenga Tochukwu said.

Across Anambra State, including Awka, Onitsha, Ekwulobia and Nnewi, the Monday sit-at-home gained even more attention, with all the above mentioned cities registering very low human and vehicular movements, just as schools, banks, markets and other public places, were deserted.

Meanwhile, police and the Nigerian Army have moved against criminals in Imo and Anambra, raiding hideouts of suspected members of IPOB deemed to be responsible for the criminal activities in both states.

A statement by the Director, Army Public Relations, Brig-Gen Onyema Nwachukwu, confirmed that in a forest in the Orlu part of Imo State, four of the IPOB elements were killed, while bodies of slain victims were discovered, including those of the army couple slain by the elements.

A source said the military were now in parts of Anambra State where they hoped to comb forests in border parts of the state to rout the criminal elements.