Tabasco, Mexico, Apr 6, 2021 / 02:59 pm MT (CNA).- A modern day reenactment of the Way of the Cross held Good Friday in southern Mexico drew criticism in local media for its depiction of militant feminists beating Christ, who had fallen to the ground.

The ceremony was organized and broadcast on Facebook by Life Online Oficial, an evangelization platform with ties to Saint Joseph’s parish in Ciudad Pemex, Mexico, which is under the jurisdiction of the Diocese of Tabasco. 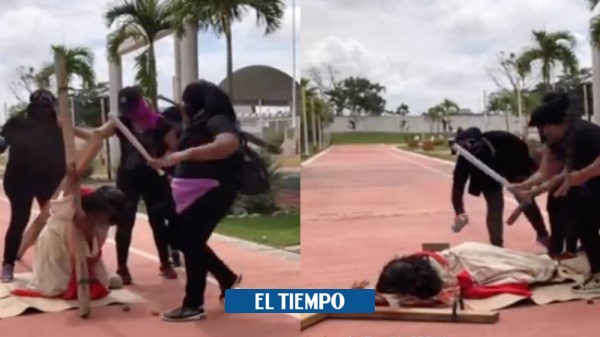 Life Online Oficial members describe themselves as “young Catholics” who are interested in “talking about many topics that help us to be better and to grow in our faith, duly informing us about topics of interest in the light of the Church’s magisterium.”

The Way of the Cross broadcast was presented by Fr. Tomás Raymundo Rodríguez, pastor of Saint Joseph’s parish.

In the portrayal of the Eighth Station, the narrator says: “2021 years ago, the Savior encountered a group of women in the streets of Jerusalem weeping for Him. Today, 2021 years later, the Lord returns to meet very different women than those he consoled.”

“Women, trapped in a group that is irrational, demanding rights based on insults, destroying everything in their path, fighting for feminism and the dignity of women, when they don’t even conduct themselves in a dignified manner,” the narration continues.

“Violent women, leaving a trail of vandalism. Women who enter the churches to desecrate the Eucharist, to mock the Virgin Mary.”

The portrayal alludes to the frequent incidents in Latin America of radical feminists tagging churches with pro-abortion graffiti.

Some Mexican media outlets criticized the Diocese of Tabasco and its major seminary for the controversial reenactment. However, Bishop Gerardo de Jesús Rojas López of Tabasco denied that the seminary or diocese were responsible for the service.

This article was originally published by our sister agency, ACI Prensa. It has been translated and adapted by CNA.