On Thursday, May 13, two unidentified persons lost their lives in a multiple accident at the Upper Iweka area of the Onitsha/Asaba Expressway. The accident which reportedly occurred under the flyover at Upper Iweka, was between a Mercedes Trailer and a Toyota; as well as a Mitsubishi L300 bus. It was attributed to over speeding and loss of control.

Not long before then, many were killed in another accident at same place, including four female hawkers. These accidents are among many that have turned that road into a human abattoir. In one particular year, a petrol tanker had fallen; catching fire, with many people around the scene being roasted to death.

The road going to Upper Iweka from Army Barracks, Onitsha is downhill, a development that often results in drivers of articulated vehicles losing control of their vehicles due to speed and ending up killing passersby, commuters or traders, who do business in the heavily congested area. 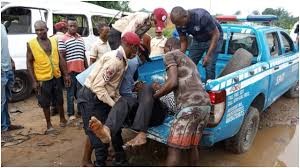 An accident victim at Upper Iweka, Onitsha, being taken to hospital by officers of FRSC. The Upper Iweka Road needs bumps.

Indeed, these accidents have been going on for long now that they have come to be seen as normal, and given the tendency of many commercial drivers and those of articulated vehicles to drive recklessly, the carnage there will not be likely to stop any time soon.

In view of this, we call on the concerned government agency or agencies to put up speed breakers or bumps from the Onitsha Army Barracks down to the end of Upper Iweka.

Also sign posts indicating speed limits for vehicles plying that road should be put up since most of the accidents there are attributed to over speeding, while government officials should be on hand to ensure compliance.

These and other measures will in no small way help in checking the accidents there.

Besides these, efforts should be made to clear the Upper Iweka area of petty traders and hawkers who flood there. They help in making the place congested, making it possible for accidents there to take great tolls on human life. Often times, drivers do not see anywhere to park because of the heavy human traffic there. The conversion of that area into a mini-market is therefore not in the best interest of anyone and should be discouraged.

We are aware of previous pronouncements against trading there in the past by the government which, however, were not followed up. The inability of following up on such directives by the government has been responsible for many problems encountered in such places and this should not be allowed to continue.

The carnage at Upper Iweka must be halted and this time, for good. We are sure that people are getting tired of waking up every day to hear news of one accident or the other there.