The candidate of the All Progressives Grand Alliance, APGA, Prof Chukwuma Soludo, has won the 2021 Anambra State governorship election. Announcing the result, early Wednesday night at the office of the Independent National Electoral Commission, INEC, Awka, the returning officer for the election and Vice Chancellor of the University of Calabar, Prof. Florence Obi, declared Soludo winner with a total vote of 112,229; representing 46.5% of total votes cast.

Prof Obi announced this after adding the figures garnered by each of the political parties in last Tuesday’s supplementary poll in Ihiala to those already declared the previous Sunday from the 20 local government areas of the state. 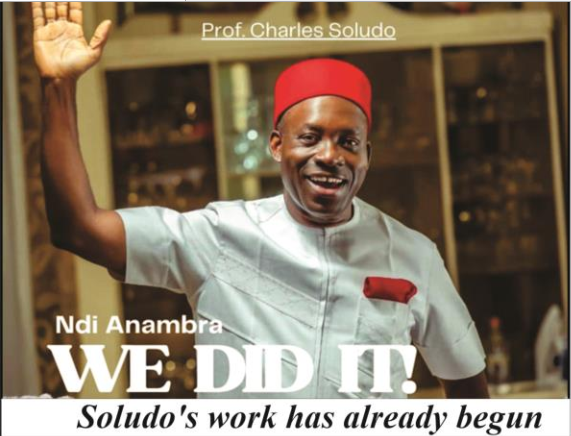 The People’s Democratic Party, PDP, came second by polling 53,807; while the All Progressives Congress, APC, came third by polling 43,285 votes.

There was little doubt that Soludo was the choice of a vast majority of Anambra people in the just concluded election and we are left with no choice than to congratulate him on his great victory which was a culmination of a long drawn out battle, beginning from the primary of his party to the election proper.

We join hundreds of his supporters and party faithful to congratulate him.

Now that victory has been achieved, we will not hesitate to tell him that his work has only just begun. And the first thing on his agenda is to reach out to his opponents and offer a hand of fellowship in order to make his government an all-inclusive one. He should simply be magnanimous in victory.

In the same vein, we also urge his opponents to congratulate him and offer their own hands of fellowship in working together to ensure good, quality governance for the state.

We are satisfied that the voting largely reflected the wishes of the people, despite one or two glitches. This is no time to bicker and cause unnecessary distraction by instituting court cases that may not change anything in the end.

In any election only one candidate will win. And as far as the process is not flawed, it will always be good for everyone to move on. This is what we expect to happen in the aftermath of this election. Soludo’s margin of victory has left no one in doubt that he was the popular choice.

But being a popular choice has its burden and that is the burden of huge expectation. Soludo cannot afford to fail; neither can he afford to prove his critics right about his elitist persona. Now is the time to build bridges of friendship as governance goes beyond building physical infrastructure.

He should ensure that his government will be one that listens to advice and accepts criticism in equal measure. He should carefully choose those to work with him so that he does not surround himself with gossips and image destroyers whose stock in trade is to destroy others in order to curry favour.

It may still be four months before he officially assumes duty but he should know that his job has already begun in earnest. We wish him all the best.