The remains of Mr Dominic Anaebonamife Obiekezie, Father of Prof Theresa Obiekezie, Commissioner for Youth Empowerment and Creative Economy, has been buried.

Late Pa Obiekezie retired from the Civil Service 21 years ago and died at the age of 82. In his sermon during a funeral service at St Francis Catholic Church, Urunnebo, Enugwu Ukwu, Rev Fr Damian Nwankwo described the deceased as a wonderful man who was not found wanting in the religious sphere.

Rev Fr Nwankwo, a one-time Parish Priest of the Church, noted that he came to testify and reflect on the life and times of the deceased, as he proved to be an upright man.

‘I came to testify what I know about him. He was a very lovely man. I made him one of my advisers in the church while I lasted as the Parish Priest and I invited him regularly anytime there was a case to be settled in the parish,’ he said. 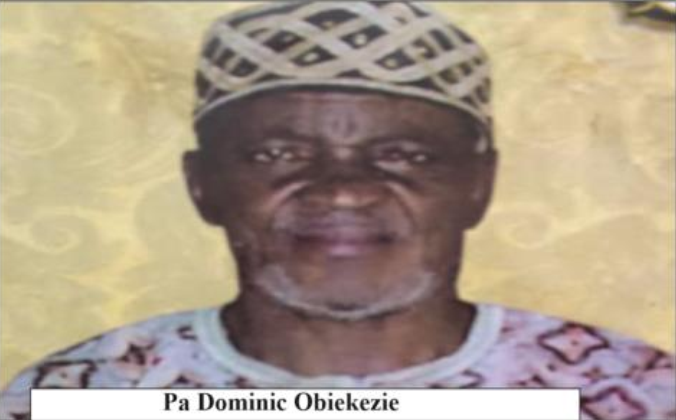 While urging those he left behind to emulate his legacies, he encouraged them to bear the irreparable loss with fortitude.

In a tribute, the first daughter of the deceased, Mrs Jane Frances Ogoemeka, described her father as an advocate of peace, a nice and quiet man.

She said he was an amazing personality who lived an exemplary life, with testimonies from those who were close to him. She prayed God for a peaceful repose of his soul.

Prof Theresa Obiekezie, second daughter of the deceased, said he was a worthy father who placed a high premium on their welfare and education.

‘He was a good, honest and kind hearted man. He so loved education that he made sure that everybody who wanted to go to school did. He was a lover of truth and would always tell the truth no matter the situation. I really miss him, but we can’t question God,’ she said.