The National Association of Nigerian Colleges of Education Students (NANCES) has honoured the Provost of the Federal College of Education (Technical), Umunze, Dr Tessy Okoli, with an outstanding leadership award.

Presenting the award plaque to the provost at her office last Wednesday, the National President of NANCES, Comrade Mahmud Abubakar, said the award was in recognition of the provost’s outstanding performance and student friendly policies since her assumption of office. 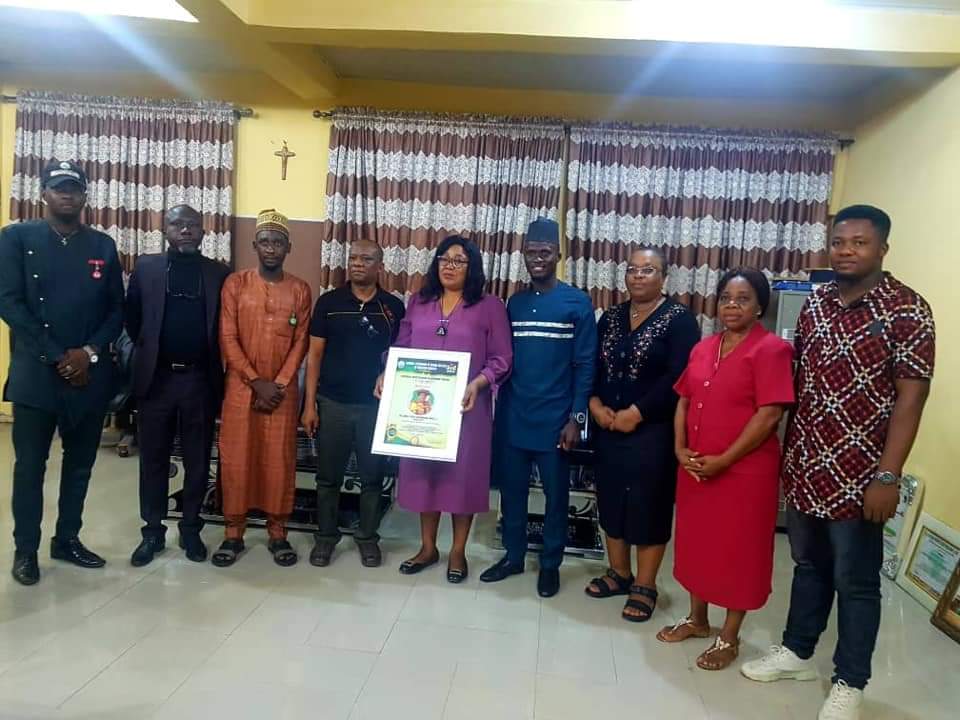 Provost, FCE (T), Umunze, Dr Tessy Okoli, with her award plaque (centre), poses with some of the Management Team of the College and the national executive of Nigerian Colleges of Education Students (NANCES). 4th right is the national president of NANCES, Comrade Mahmud Abubakar, and 4th left is the Deputy Provost of the College, Dr Christopher Chukwuogo, Wed, Aug 11, 2021

Comrade Abubakar led other national executive members of the student group on the visit.

According to the national president of NANCES, Dr Okoli’s activities in the College had distinguished her as a leader with vision, and the College had in her administration, witnessed rapid infrastructural development and high-level peace.

Abubakar also congratulated the Provost on her emergence as the National Secretary of the Committee of Federal Provosts, which, he said, testified to her outstanding leadership qualities at the national level.

On the Students’ Union activities which were suspended in the College, the NANCES national president appealed to the provost to consider lifting the ban on the suspension.

He noted that the period of the suspension must have enabled the students to realize their mistakes and make amends. This was even as he, on behalf of the national body, apologized for the concerned students’ misdeeds

Comrade Abubakar suggested the need to set up an Interim Students’ Caretaker Committee if the reconstitution of the Students’ Union Government (SUG) would take a longer period.

Responding, the Provost, Dr Okoli, thanked the student body for the recognition accorded to her and lauded the students’ leadership for its peaceful disposition.

She stated that the College Management had already commenced discussions on students’ activities in the College and advised students to always conduct themselves responsibly, while noting that the College awarded certificates to students who were found worthy in character and learning.

Dr Okoli noted that the College placed a high priority on good character formation of her students, which, she said, would enable them to become worthy ambassadors of the College.

Also speaking on the occasion, the Deputy Provost, FCE (T) Umunze, Dr Christopher Ugwuogo, praised the peaceful approach of the group. He urged students to imitate such responsible approach in their respective engagements.