In most Catholic Churches in the Eastern part of the country, cleaning the inner part of the church is basically regarded as the duty of women under the aegis of Catholic Women’s Organizations (CWO); Mary League Girls’ Association and the Altar Girls. But at St Theresa’s Catholic Church, Nibo, the paradigm has been shifted.

It was a mixed feeling for all parishioners of St Theresa’s Catholic Church, Nibo, Saturday, March 13, when the Catholic Men’s Organization (CMO) of the parish turned out in their numbers to clean the inside and outside of the church premises. 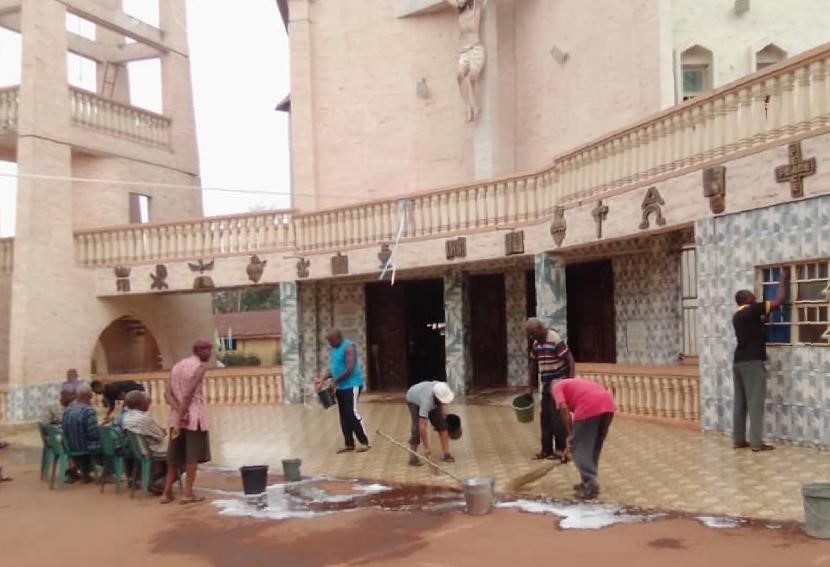 Reacting to the development, the immediate past CMO chairman of the parish, Sir Raymond Okeke, described the activity as the first in the history of the parish; all geared towards assisting the mothers and proving to them that the men could equally perform the seeming difficult tasks, if not better.

Contributing, the parish catechist, Mr Fidelis Nweke, said the move was to appreciate the female folk who had been undertaking the task for many years and also to contribute their own quota to the Church and humanity as pillars, especially in the Lenten period.

Also Mr Christian Okpala, CMO Chief Security Officer, described the move as a way to cultivate in God’s vineyard, while he prayed to God for good health amongst them as they had come out to work in the house of God.

On the part of Mr Mike Onwukaike, Patron, St Martin’s Zone, it was way of displaying humility as pillars of home and the Church.

However, the Resident Priest of the Parish, Monsignor Sylvester Mgbemfulu, revealed that all his life, that he had never witnessed such level of humility among CMO members.

He charged other parishes to emulate what he described as a peculiar act.

The Parish Priest Rev Fr Sylvester Dunu, before blessing the CMO, remarked that the cleaning was part of their Lenten observance and to instill in them that nobody was above working for God.

‘Spiritually, everybody needs to work together to renew the face of the Church, especially in this season of renewing faith, hope and love. As you all can see, you did it better than the female folks,’ he added.