The leadership of Awka Diocesan Catholic Men’s Organization has decried the low turnout of men, mostly the young ones, in church activities.

Delegates from the group made the outcry on Wednesday at St. Patrick’s Cathedral, Awka, during their courtesy visit to the Catholic Bishop of Awka Diocese, Most Rev. Paulinus Ezeokafor.

Speaking at the visit, the President of Awka Diocesan CMO, Mr. Joseph Onuegbu, said the 2022 Father’s Day Celebration necessitated the visit as the executive members of the organization came to give a detailed account of how the Fathers’ Sunday was celebrated in the Diocese.

He regretted what he described as the continuous decline among fathers in church affairs, saying that such would pose a threat to the propagation of God’s gospel.

He disclosed that the uniform of the association had been produced to enable young fathers and newly wedded men to procure theirs ahead of the organization’s activities. 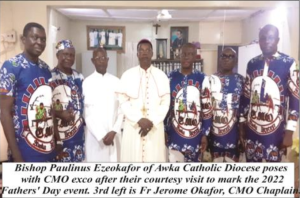 He proposed for the Bishop, to create a day for the fathers within Awka Diocese which would be tagged ”Bishop Ezeokafor Day with the CMO”.

He maintained that such avenues would enable the fathers to parley with the Bishop and discuss issues peculiar to the male flock in order to increase their effectiveness and promote active participation.

Adding his voice, the Vice President of the Association, Clement Ofoedu, appealed to parish priests to devise ways of encouraging fathers to be active in their respective parishes, noting that it would boost their morale to take more active part in church activities.

Contributing, the Chaplain of Awka Diocese CMO, Rev. Fr. Jerome Okafor, explained the need for a regional structure within the organization, saying that it was needed for more active participation.

He noted that the CMO structure was nothing to write home about, regretting that the fathers lacked organizational structure across various deaneries unlike their women counterparts, the CWOs.

He expressed optimism that regional structure when created would bridge the gap in the CMO and breed more active participation among the fathers.

Receiving the fathers, Bishop Ezeokafor reminded them of their responsibilities to the Church and their respective households. He described them as the pillars of the Church and maintained that the young ones needed to be part and parcel of the association as they would take up the mantle of leadership when the elderly ones could no longer take active part.

He said that their proposal would be critically examined in order to adopt measures to boost CMO’s active participation in church affairs.

He appreciated them for their contributions towards the growth of the Church and the gifts which they came with.

The Catholic prelate emphasized the importance of record keeping, telling the fathers that it was important for accountability. He said that the CMO must organize themselves to become more active in the activities of the Church.