Blessing the office complex which will serve as a temporary secretariat for the CMO, the Bishop of the Catholic Diocese of Ekwulobia, Most Rev Peter Ebere Okpaleke, prayed that it would be for the greater glory of God, help the Catholic fathers in the propagation of the faith, make for easy running of the organization, as well as for the growth of the family of Christ, especially in Ekwulobia Diocese. 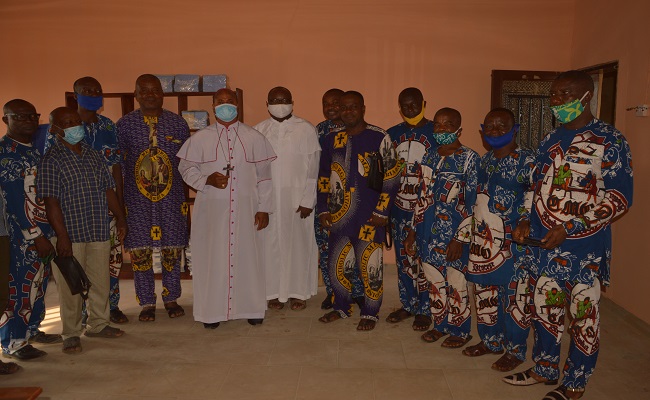 The Bishop of the CADEK, Most Rev Peter Ebere Okpaleke (5th from left), poses with some executive members of CMO-CADEK inside the newly blessed CMO Office. The bishop is flanked on his right by the President, CMO-CADEK, Mr Vitus Uzoh, and on his left by the Chaplain, CMO-CADEK, Rev Fr Peter Nwankwo, St Joseph’s Cathedral, Ekwulobia, March 10, 2021. Inset: Bishop Okpaleke (right), shows the new CMO uniform which he received from the chaplain, Rev Fr Nwankwo (3rd from left) and the CMO President, Mr Uzoh (2nd from left).

The office is situated at the second floor of the new 2-storey building at the right side of St Joseph’s Cathedral Podium, Ekwulobia.

CMO-CADEK at the event also presented its customised uniform to Bishop Okpaleke.

In an interview with Fides, the pioneer President, CMO-CADEK, Mr Vitus Uzoh, said the twin office would be for the running of the affairs and activities of the diocesan CMO, as well as be the contact point for the members of the organisation at the parish and deanery levels.

Mr Uzoh said the uniform of the organisation would be on sale at the office which would also serve as a mini business centre for the CMO. The president called on those who were in need of computer services, photocopying and the like, to visit the CMO office for such services.

He revealed that the organisation would employ an administrative secretary who had computer and accounting skills to work in the office, Mondays to Saturdays, while the president would be in the office twice a week and on emergency cases.

On the estimated cost for furnishing of the two offices, the president said the CMO spent over one million Naira in the furnishing and tiling works. According to him the organisation tiled the two offices down to the staircase of the building.

For his part, the chaplain, CMO-CADEK, Rev Fr Peter Nwankwo, described the facility as what would be of a great benefit to not only the organisation but to the entire Catholic Diocese of Ekwulobia.

According to him, the mini business centre service available in the office would be beneficial to everyone.

Rev Fr Nwankwo, who is also the parish priest, St Anthony’s Parish, Ikenga, said the office would also serve as a meeting venue for the executive and the large executive of the CMO.