Pope Francis is featured in a documentary film on climate change and the environment that premiered at the Vatican on Tuesday.

“The Letter,” which can be streamed for free on YouTube Originals starting Oct. 4, follows a climate activist, an indigenous leader, a climate refugee, and married marine biologists as they travel from their corners of the world to the Vatican to speak to Pope Francis.

The film includes video from the meeting with Pope Francis as well as never-before-seen footage from Francis’ papal inauguration on March 19, 2013. 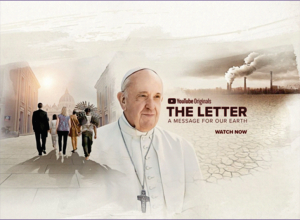 The inspiration for the documentary’s title was taken from the word “encyclical,” which is used for certain papal messages and literally means “circular letter.” The title refers to Pope Francis’ 2015 encyclical Laudato si’.

Cardinal Raniero Cantalamessa, OFM, preacher of the papal household, also appears in “The Letter” to speak about the Franciscan roots of Pope Francis’ encyclical on the environment.

The world premiere of the film took place in the Vatican’s New Synod Hall on Oct. 4, the feast of St. Francis of Assisi.

Cardinal Michael Czerny, prefect of the Dicastery for Promoting Integral Human Development, presented the film at a press conference on Tuesday. Czerny’s dicastery was a partner of the film together with the Vatican’s communications office.

“The film ‘The Letter’ highlights the key concept of dialogue,” he said. “Dialogue is central to the Holy Father’s vision for humanity’s peace with the Creator, with all creation, and among us humans.”

Hoesung Lee, chair of the Intergovernmental Panel on Climate Change, said at the press conference that the film “is a timely reminder of the urgency and importance of Laudato si’.”

“Both the science community and the faith community are very clear: the planet is in crisis and its life support system [is] in peril. The stakes have never been higher, and we should be the source of the solution to this crisis,” he added.

The film’s writer and director, Nicolas Brown, said the exercise of making the documentary “has been one of getting out of our bubbles and meeting each other across this planet. These voices are important largely because they are the perspectives of those who suffer the most.” The five main subjects of the film “The Letter” pictured in front of a map in the Vatican. They traveled to Rome to meet Pope Francis. Photo credit: Laudato Si’ Movement

The five main subjects of the film “The Letter” pictured in front of a map in the Vatican. They traveled to Rome to meet Pope Francis. Photo credit: Laudato Si’ Movement

The film’s subjects are Cacique Odair “Chief Dadá,” an indigenous leader of the Novo Lugar community of the Borarí people in the Amazon rainforest in Brazil; Ridhima Pandey, a young climate activist from India; Arouna Kandé, a climate refugee from Senegal; and Robin Martin and Greg Asner, marine biologists who live in Hawaii.

Lorna Gold, president of the Laudato Si’ Movement, is also part of the film.

“The film and the personal stories powerfully show that the ecological crisis has arrived and is happening now,” Cardinal Czerny said. “The time is over for speculation, for skepticism and denial, for irresponsible populism. Apocalyptic floods, mega-droughts, disastrous heatwaves, and catastrophic cyclones and hurricanes have become the new normal in recent years; they continue today; tomorrow, they will get worse.”

The cardinal said: “In his letter Laudato si’, Pope Francis says, ‘I would like to enter into dialogue with all people about our common home.’ The film ‘The Letter’ provides a pathway into such [an] encounter and dialogue. This beautiful film — a heartbreaking yet hopeful story — is a clarion cry to people everywhere: wake up, get serious, meet, act together, act now.”