A cross section of residents of Onitsha wants Prof. Chukwuma Soludo, the Governor of Anambra State, to evacuate the heaps of garbage littering most roads of the Commercial City.

The State government also declared restriction of movements between 7 am and 6 pm in those days and called on residents of the area to come out en- masse and join in the clean-up exercise.

More than a week after the exercise, residents of Onitsha are calling on the state government to evacuate the generated waste which are occupying some city roads and making them impassable. 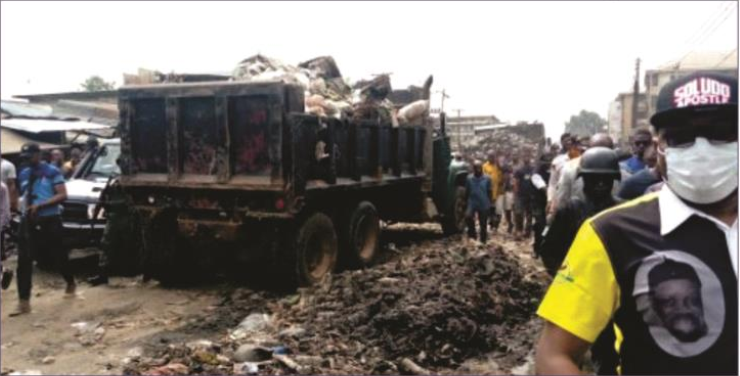 Mr. Emeka Okeke, a resident of the commercial city, said the State government should continue the exercise until environmental sanity is restored to the area.

Mr. Okeke said residents who looked forward to such State-inspired clean up, embraced the exercise as houses and streets mobilised to clean up the drainage in their vicinity.

He said market associations also cooperated and cleaned up their environment during the exercise.

Mr. Okeke, however, told our correspondent that one week after, heaps of garbage still covered the roads as the State government did not make arrangements for collectors to evacuate them.

“The clean-up exercise was highly embraced by Onitsha residents, tenants associations and even landlords, who came out to clear the gutters, they bought cartons of drinks to encourage themselves while doing the work.

“We expected that after bringing the refuse out, they would bring trucks and pack them but the mountains of garbage are on the streets disturbing vehicular traffic and social activities.

“From Ekene Dili Chukwu Park at Ochanja through Menax Junction to Ochanja, and between Iweka Road by Modebe Juncture and Iweka by Venn Road, what you see is heaps of waste.

“But they are gradually returning back to the gutters because of the rain and people who feel it is disturbing them secretly push them back since the government is not forthcoming,” he said.

Mr. Uzor said the heaps of refuse on the streets of Onitsha are not only constituting nuisance to traffic but also environmental health danger on residents.

The HURIDE Executive Director said the job given to Sakamori is most welcome but they need to execute the clean up to completion.

He said the evacuation exercise should be at night to avoid further loss of productive hours of the day.

“The decision to clean up Okpoko, Onitsha and environs was a good one, but it is not a one-off thing, it has to continue until the area is reclaimed.

“The heaps of refuse on the roads are unacceptable; Obanye by New Market Road, Ugwunabamkpa by Okosi, Bida and Niger Streets are covered, the Anambra Government has to come and evacuate the refuse before they return to the gutter.

“We are also pleading that the evacuation should be done in the night when the roads are clear, we can’t afford another lockdown like we had the last time, we can’t be struggling to recover our Mondays and also be imposing a lockdown due to clean up,” he said.

Efforts to reach Dr Onyekachukwu Ibezim, the deputy governor and chairman of the clean-up exercise, on plans to address the situation were not successful as he did not take his calls nor respond to text messages.