CHRISTMAS: THE MOMENT OF TRUTH

2018 Christmas Message of His Lordship Most Rev. Paulinus C. Ezeokafor, to the Family of God in Awka Diocese

Dear People of God,
May the grace and peace from God the Father and our Lord Jesus Christ be with you all.
The annual feast of commemorating the nativity of the King of the universe, son of David from the stock of Jesse, is once again at the door. What we are commemorating in our time happened more than two thousand years ago as earlier foretold by the prophets of Old (cf. Is. 9:6-7; Jer. 23:5-6). The feast brings Christians scattered all over the world to a happy celebration of the salvific event of the Incarnation of the Son of God. God was born in our midst, on earth, and became like us in all things except sin, that we could be one with him.

This is incomparably greater than any other historical event that ever happened or could ever happen on earth. Yet it is unfortunate that there are still millions of people who have not heard this Good News. There are also millions of others who have heard but have not believed it. More still, there are millions who believe but have not lived according to it. It is indeed hard for some people to believe that the infinitely all perfect God should descend so low to take up the frail and fallible human nature. He however chose to do that because of his infinite love for our redemption.

The Good News and the truth of the nativity of Jesus was received and accepted, first by the shepherds who courageously joined the angels in a joyful exclamation: Gloria in excelsis Deo, et in terra pax hominibus bonae voluntatis! (Luke 2:14). When still in the womb, the holy woman Elizabeth filled with the Holy Spirit, gave a loud courageous attestation to the truth revealed about Christ from of old (Luke 1:41-42). This, therefore, marks Christmas as a season of courageous witnessing to the truth, hence the moment of truth. The Good News of our redemption, of our vindication and liberation must then be heralded courageously. At Christmas, Christians are much more reminded of their calling to be vanguards of truth, the truth of the Gospel, as John the Baptist was, even to the point of dying for it. It was for this reason – to bear witness and die for the truth, that the Son of God was fleshed, humanized, and born of a Holy Virgin.

Here, “giving to God what is God’s” refers to the fulfillment of a Christian’s religious obligations for the upkeep of the Church of God on earth and propagation of the faith. Similarly, “giving to Caesar what is Caesar’s” refers to the fulfillment of a Christian’s civic obligations for the upkeep of the State of which he is a part. Some misunderstand this saying of Jesus as meaning a call for us to play double allegiances, one to the devil (world) and the other to God. This is absolutely false! It rather means fulfilling our duties to both God and the State, by allowing our love for God to influence and direct our engagement with the State and other aspects of our lives in the world.

Part of a Christian’s civic responsibilities is courageous witnessing to the truth revealed from of Old. Truth has a vindicating, liberating, and redemptive power, thence, truth saves.

A nation perishes in corruption and injustice once its citizens are not courageous enough to call a spade a spade, and even unready to die in defense of the right cause. No wonder the biblical town, Gomorrah, perished for lacking honest men and women. A nation, on the other hand, survives and progresses once there are people who are ready to die on account of truth, so as to redeem the nation as Christ did.

It is certain that during the Christmas period, a lot of political meetings and conventions will be held at various levels in preparation for 2019 elections, as parties have officially concluded their primaries. As Christians who are celebrating the birth of our Redeemer and Messiah, Son of Truth and Justice, our actions and reactions with regard to election of leaders into offices should be formed and guided by the spirit of truth and of good conscience. It is part of our civic obligations to absolutely make conscientious contributions rather than being sentimental regarding electing good leaders imbued with fear of God and who have the prerequisite competence demanded of their office.

Our PVC is our mandate and empowerment for this. It is, indeed, a great weapon necessary for the casting of our votes at this time, to wage war against bad leadership in the country.

For without voting, one is powerless to effect changes and to contribute positively to the development of the society. Neglecting to secure a PVC and to vote is sheer neglect of one’s civic duty towards the State, and failure to give Caesar his due. We must speak to our consciences and see our active participation as a response to God’s invitation to bear witness to Him among men and women of our time.

As we celebrate the season during which we commemorate the birth of the true Son of God to redeem us from slavery to sin, let us cooperate with Him by conscientiously playing our civic role, to see that we are really vindicated. Christ is the truth, the light and the way to the Father. May the light of His face show us the proper way to the truth, the truth that will set our great nation free from its present abysmal darkness. It is only when we are determined to be delivered from bad leadership and the sorrows arising therefrom that our celebration can really be joy laden and meaningful.

Given at Awka on 8 December 2018, the Solemnity of the Immaculate Conception of the Blessed Virgin Mary 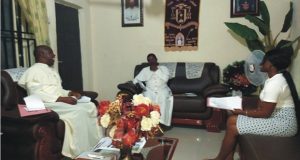 The Physically Challenged are Part of Us – Bishop Ezeokafor 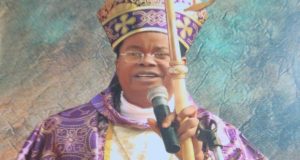 FROM “BEING WITH” TO “BEING FOR”: THE VALUE OF A CARING PRESENCE