Choosing Between your Wife and your Mother

I watched a video clip shared by one of my colleagues a WhatsApp group I belong to, the other day, where an old woman pleaded with her son to drop her off at the hospital with his car because she was sick and needed to get medical treatment. The man immediately accepted and told her to enter the car  so they would head to the hospital as she requested.

Almost immediately, the man’s wife rushed out of the house, holding her little son and asked the man where he was going to. He explained that he was taking his mom to the hospital for her treatment. Something which I found very disturbing happened. The woman  immediately told her husband that she needed to go to the hairdressing salon to make her hair, fix her nails and eyelashes because she was not looking good.

Her husband told her that was not a problem, that she should wait for him to quickly drop his mom at the hospital and when he returned, he would take her to the salon. The woman disagreed and vehemently insisted to be taken to the beauty parlour with the car.

His confusion became worse when his wife told him to choose between herself and his mother. The mother sadly stated that she carried him for 11 months in her womb and breast-fed him for two years, therefore she dared him to choose the wife over her. His wife on her own part, reported that they have been married for years and she has played all her conjugal roles to her husband and dared him to choose his mother over her.

Frustrated, not knowing who to choose over the other, the young man told both his mother and his wife to go to their different destinations and leave him out of it. He turned and walked away from both of them. 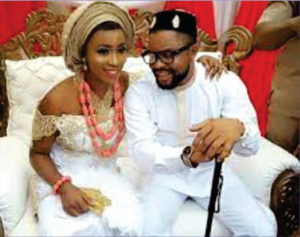 That was where the short video ended. Before the end of the day, that same video clip was posted in about four other WhatsApp groups I belong to. In each of the different groups the video was posted, it elicited debates from both the female gender and the male gender.

Some people were in support of the man for walking out on both women in order to avoid a situation where he would hurt one person if he chose the other person. This group of people argued that the man was very peace loving and did the proper thing. Another group argued that the man was very stupid for acting so cowardly. They said that his mother was the first person to demand to be taken to the hospital because of her medical condition.

According to them, since it was a medical issue, he should have taken his mother to the hospital to get her the treatment she begged him for. They further argued that the woman gave birth to him and nurtured him till he became a man, therefore asking to be taken to the hospital for medical treatment by the woman, was not too much of a request.

Therefore, he should have taken her to hospital, no matter what because medical treatment was more important than beauty treatment. That was the verdict of the second group. The third group said that the man was a weakling. They said that his wife is very stupid and he should have taught her a very big lesson by beating the hell out of her. They said he should have shut her up by showing his authority by going violent.

All through the arguments, I tried to see reasons with the different contributors. I guess it’s different strokes for different folks. So I respected everyone with their different views.

One question however occupied my mind, both as I watched the video clip and also, as I read the different arguments concerning it in different WhatsApp platforms. I believe that it is the candid answer to that question that solves the problem in that story.

That question is, if it was the mother of that woman that was sick and needed to go for medical treatment, would she tell her husband to leave her mother and instead, take her to the beauty parlor to make her hair, fix her nails and even her eyelashes??? You and I know that the answer to this question is NO.

An emphatic NO!! She would have made sure that her own mother would be taken to the hospital by her husband immediately she made the request. You see, so many marriages have been destroyed today by women like that who have nothing to offer their immediate family, their extended family, the society they live in and even their country.

When you visit such homes, the men in those homes die silently because of what they pass through in the hands of such women. Such women will drive a man insane to the point where he buried himself in alcohol. Such women frustrate their husbands to the point where they become wife beaters. It is also such women that drive their husbands into infidelity when they no longer find peace in their homes.

It is really sad. I almost laughed when I read one young man’s post. He said he has a stressful job and values his peace of mind. According to him, if his wife gives him stress, he will leave the house for her and rent a one room apartment somewhere in town in order to live long.

That was funny, but also sad in every sense. Let me say this, if it gets to the point where a woman decides to make a man choose between her and his own mother, then that marriage is toxic. The couple would need to get help.

There is no perfect marriage out there. A lot of people have said that marriage is a scam. I strongly do not believe that school of thought. I believe a lot in marriage, but it doesn’t mean that marriage is easy or that my marriage is the sweetest. No. My marriage has had its trying moments in the past three decades. So, it’s not as if mine is perfect. The truth is that it takes two to tango.

The success or sweetness of every marriage depends on the efforts made by both the man and the woman. I know some people say that the man has a lot of work to do in the home to make the marriage work, while others believe that it depends on the woman for the home to be smooth. I personally believe that there is no formular for marriages but couples need to understand their strengths and weaknesses in their homes and then, try to strike a balance. A woman, however has more work to do to ensure that her home is at peace.

The happiness and warmth in every home should be provided by the woman in that home. It is a natural responsibility planted by nature and wise women have capitalized on it to make their homes a safe and peaceful haven for their families. We argued this out in some platforms I belong to and some women disagreed with me, saying that men were not helping matters.

I advised them that if you put your home in order, it goes a long way to cushion the effects of the irresponsibility of certain men. Women are family oriented, naturally. It’s a gift. It’s a call. It’s an honour to be a symbol of peace in the home. This is why I want to call on every woman reading this, to take her home and check where the gaps are. If you look closely, you would find them.

When you do, kindly close them up and draw your family together. There is no way you can love a man and hate his mother. It doesn’t even make sense. I know the video clip we all watched today was just a make-believe skit which was merely used to show the world the kind of things that many marriages suffer, but it’s also reality. It happens in many families.

So, the mother-in-law should be accorded her due respect in that family. Finally, who is a real man? I believe a real man is one who takes charge as the head of the family, just as Christ takes charge of the church. He understands his position as one entrusted to see that his family does not lack, while protecting them from danger. He is like the Lion in the forest, considered the strongest and bravest even in the face of attack by enemies.

A real man knows how to love his wife, respect, cherish his wife and honour her, just like he loves, adores, respects , cares and cherished his mother . A real man does not create an atmosphere where he has to choose between his mother and his wife. And vise versa. This is because they both play their different roles in not only his life, but in their families.

He doesn’t indulge in domestic violence because it reduces his worth in his family. He also takes responsibility at the right time. A good wife ensures that her husband looks forward to coming home to peace, love and warmth. Finally, there are no perfect marriages, no perfect husbands and no perfect wives, but there are perfect opportunities in our everyday lives to make amends where there are gaps and help one another to become better people in the home.

Being a woman is a privilege. It offers us the opportunity to create happy homes through the happy moments we provide with all the love, warmth and tenderness our hearts can give. Let’s keep putting it to good use so that our husbands will have no choice than to give us and our children the best versions of themselves always, God bless all marriages!!!