Chimamanda Adichie’s father, Professor James Nwoye Adichie, died on Wednesday June 10, 2020. In this piece, she talked about the grief of losing a dearly beloved parent, how raw the pain is, and the frustrations of being stuck in the US, unable to travel to Nigeria due to COVID-related restrictions when it happened last year. She also shares loving memories of her time with him. Kindly read…

And just like that my life has changed forever. June 7, there was Daddy on our weekly family zoom call, talking and laughing. June 8, he felt unwell. Still, when we spoke he was more concerned about my concussion (I’d fallen while playing with my daughter).

Because I loved my father so much, so fiercely, so tenderly, I always at the back of my mind feared this day. But he was in good health. I thought we had time. I thought it wasn’t yet time. I have come undone. I have screamed, shouted, rolled on the floor, pounded things. I have shut down parts of myself.

“The children and I adore him,” my mother wrote in a tribute when he was made professor emeritus. We are broken. We are bereft, holding on to one another, planning a burial in these COVID-scarred times. I am stuck in the US, waiting. The Nigerian airports are closed. Everything is confusing, uncertain, bewildering. 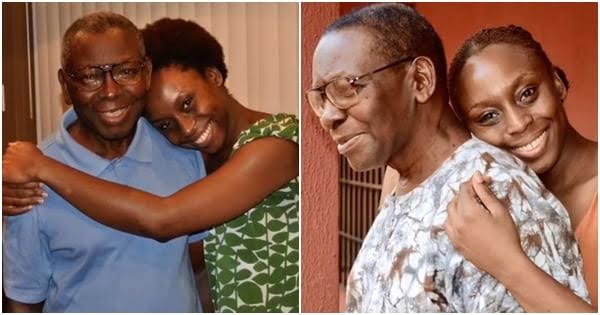 Sleep is the only respite. On waking, the enormity, the finality, strikes – I will never see my father again. Never again. I crash and go under. The urge to run and run, to hide from this. The shallow surface of my mind feels safest because to go deeper is to face unbearable pain. All the tomorrows without him, his wisdom, his grace.

We talked almost daily. I sent him my travel itineraries. He would text me just before I got on a stage: Ome ife ukwu! Nothing else mattered to me as much as the pride in his eyes.

I saw him last on March 5th in Abba. I had planned to be back in May. We planned to record his stories of my great grandmother.

Grief is a cruel kind of education. You learn how ungentle mourning can be, how full of anger. You learn that your side muscles will ache painfully from days of crying. You learn how glib condolences can feel.

My father was Nigeria’s first professor of Statistics. He studied Mathematics at Ibadan and got his PhD in Statistics from Berkeley, returning to Nigeria shortly before the Biafran War. A titled Igbo man – Odelu Ora Abba – deeply committed to our hometown. A Roman Catholic with a humane and luminous faith. A gentle man and a gentleman. For those who knew him, these words recur: honest, calm, kind, strong, quiet, integrity.

From England, my brother set up the Zoom calls every Sunday, our boisterous lockdown ritual, two siblings joining from Lagos, three from the United States, and my parents, sometimes echoing and crackly, from Abba, our ancestral home town, in southeastern Nigeria.

On June 7th, there was my father, only his forehead on the screen, as usual, because he never quite knew how to hold his phone during video calls. “Move your phone a bit, Daddy,” one of us would say. My father was teasing my brother Okey about a new nickname, then he was saying that he hadn’t had dinner because they’d had a late lunch, then he was talking about the billionaire from the next town who wanted to claim our village’s ancestral land.

He felt a bit unwell, had been sleeping poorly, but we were not to worry. On June 8th, Okey went to Abba to see him and said that he looked tired. On June 9th, I kept our chat brief so that he could rest. He laughed quietly when I did my usual playful imitation of a relative. “Ka chi fo,” he said. (“Good night.”) His last words to me. On June 10th, he was gone. My brother Chuks called to tell me, and I came undone.

In my American home, I like to have National Public Radio on as background noise, and whenever my father was staying he would turn it off if nobody was there listening to it.

“Like he always wanted to turn off the generator too early in Abba. I’d so happily let him now if he’ll just come back,” Okey says, and we laugh.

“And I will start to wake up early, and I’ll start to eat garri, and I’ll go to Mass every Sunday,” I say, and we laugh.

I retell the story of my parents visiting me in my graduate-student apartment at Yale, where I say, “Daddy, will you have some pomegranate juice? And he says, ‘No, thank you, whatever that is.’ ”

Pomegranate juice became a standing joke. All those standing jokes we had, frequently told and retold, my father’s expression this minute utterly deadpan and, in the next, wide open with delighted laughter. Another revelation: how much laughter is a part of grief. Laughter is tightly braided into our family argot, and now we laugh, remembering my father, but somewhere in the background of the laughter there is a haze of disbelief.

The laughter trails off. The laughter becomes tears and becomes sadness and becomes rage. I am unprepared for my wretched, roaring rage. In the face of this inferno that is sorrow, I am callow and unformed. But how is it that in the morning he was joking and talking, and at night he was gone forever? It was so fast, too fast. It was not supposed to happen like this, not like a malicious surprise, not during a pandemic that has shut down the world.

Throughout the lockdown, my father and I talked about how strange it all was, how scary, and he told me often not to worry about my doctor husband. “You actually drink warm water, Daddy?” I asked one day, surprised, after he said with sheepish humor that he’d read somewhere that drinking warm water might prevent the coronavirus infection.

He laughed at himself and told me that warm water was harmless, after all, not like the nonsense that went around during the Ebola scare, when people were bathing in saline before dawn. To my “How are you, Daddy?,” he would always respond, “Enwerom nsogbu chacha.” (“I have no problems at all. I’m perfectly fine.”) And he really was, until he wasn’t…