Journalism and media practice in recent times has been bedeviled by a myriad of challenges. These challenges come from the rise in insecurity, communicable health diseases, internet broadcasters and/or jungle journalist (self-acclaimed journalist) peddling information often detrimental to society rather than informing and educating people, Daruwana Daku and Elizabeth Awu Bassey report.

These daunting challenges are what the Chief Executive Officer/Managing Director, Anambra Broadcasting Service (ABS), Chief Uche Nworah, PhD, saw a need to discuss by articulating his thoughts in the book entitled, “Media Practice and Security Challenges in South-East Nigeria”.

The book review, which gathered men of letters, academics and protégées from different walks of life, was last Wednesday, November 24, held at the hall of the Academic Staff Union of Universities (ASUU) in Nnamdi Azikwe University Awka, Anambra State. 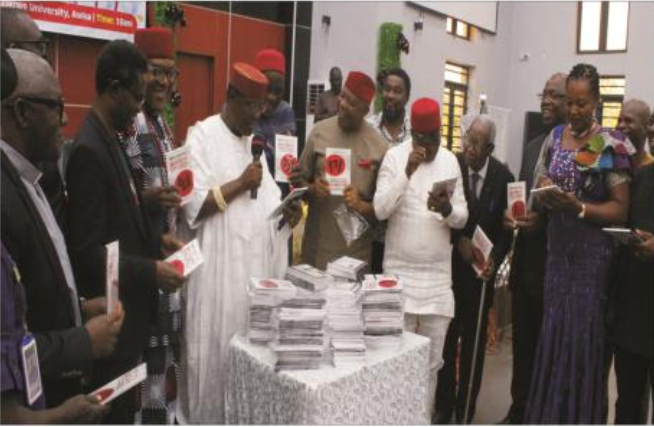 In his review, the professor in the Department of English, Nnamdi Azikwe University, Prof. Chike Okoye, mentioned that the book was broken down into six chapters with a segment of three bonus chapters

He said that the book discussed exhaustively on the topics: the media practitioner, media practice in south-eastern Nigeria, security challenges in South-East Nigeria, impact of insecurity in South-Eastern Nigeria on media practice and the role of the media in curbing rising insecurity in the south east. He added that it also looked into: COVID 19 educational intervention in Nigeria, public broadcasting stations and Nigeria media ecosystem an issues around internet broadcasting in Nigeria.

The reviewer noted that the book was timely, since it captured the blurry-edges of traditional and citizen journalism; he however, enjoined all to get copies of the book, for it is a splendid and informative piece of work.

The book received encomiums by guests and readers, who commended the author, Chief Nworah, for his well thought initiative in tackling the rising menace of media practice in Nigeria, especially in the South East.

The Deputy Vice Chancellor of Nnamdi Azikwe University,Awka, Prof. Joseph Ikechukwu, noted that the author’s choice of reviewing the book in the University was a pointer that education was a lasting solution to societal defects.

Goodwill messages trailed the event, among which was that of the Governor of Anambra State, Chief Willie Obiano, represented by the Managing Director, National Light Newspaper, Sir Chuka Nnabuife said the book from the author was the twelfth book authored by people working directly with the government of the state. He added that Uche Nworah’s book was the third coming from Anambra Broadcasting Service. The governor also pointed that none of the books authored by the aids of the government were praise singing books but books of high intellectual quality,which won awards, with the exception of one or two.

The governor who commended the author for choosing Nnamdi Azikwe amidst the options of bigger halls in the city, said the state had proved herself in education in the country, despite combating insecurity.

Unveiling the book, Nze Sullivan Akachuwku commended the author for keeping the right company. Akachukwu who pointed out what he described as the reasons Chief Nworah’s exceptional touch was felt at ABS, maintained that the company he kept was a major factor.

Dignitaries at the book review expressed confidence that the book would solve the security challenges of media practice in the Southeast and encouraged all, particularly media practitioners, security experts, media formators and students of Journalism, to procure the book.

Other dignitaries who graced the book review included the member representing Njikoka Constituency II in the Anambra State House of Assembly, who also doubled as chairman of the occasion, Hon. Sir Pete Ibida; Director of Fides Media, Rev. Fr Dr Martin Anusi and other media gurus, authors and academics.