The man I write about is a perfect example of one who has lived his life full cycle. Born, the only child of his parents, he was raised in a Catholic home and grew up being an exceptionally bright kid. He passed through the educational terrain, marital terrain, fatherhood terrain, journalism terrain and indeed, the political terrain as a master of all spheres. He really has seen it all.

He is truly a giant, not only in size, but in the area of achievements. He is a colossus and truly iconic in the world of journalism. He has won so many awards to prove this point, including Best Journalist of the Year 2013. This Nimo-born jolly good fellow can be described as the happiest fellow in any crowd, his basic principle, mostly being that happiness is the best feeling ever. He has a good heart and can mostly be compared to an innocent child when it comes to being kind to people. 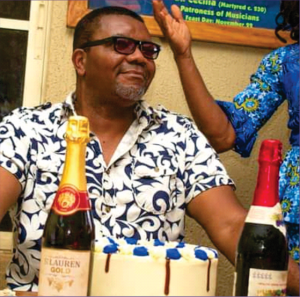 He is not a man very interested in celebrating his birthdays. At the office, he is usually aloof about it when people enquire if he will be throwing a party. He rather buys gifts and pays a visit to the motherless babies in their orphanage. That pretty much tells you about his philosophy of simplicity. Jude is a happily married man with grown up children. He is an unrepentant sports lover and belongs to the Chelsea Football Club which he acclaims the best in the world, not minding if they lost every match in any season. I’m however not sure if he plays soccer.

He loves food and will come to work, openly describing what he plans to have for lunch or dinner. He is always specific about it. Sometimes, it’s really funny listening to him describe how great the food turned out or how terrible it was. Some other times, it can be really annoying. I have never seen anyone excited over food like he does. It however explains the kind of man he is and how little things make his day. An astute family man, you can never miss noticing the way

he proudly talks about his children and how proud they make him, or how his wife never maltreated any of their house-helps all their lives. He also never stops telling us how he can never miss Sunday rice in his home because his wife cooks the best Sunday stew!!! About mentorship, this gentleman has mentored so many people in the journalism profession, where he reigns supreme.

It is also one area where he has really made an impact, especially with the youth. I make bold to say that Jude Atupulazi is a man who has truly made a name for himself in the work place and beyond. He just added a new age and below are some of his friends, people he has mentored, colleagues and his son who have all celebrated him massively. Their submissions tell a unique tale about this wonderful piece of God’s creation, Jude Atupulazi. I hope you enjoy this…

He is a man who hates public holidays yet makes work look like hobbies on holidays. Mentor with vibes. He is the description of an Editor -in-Chief of a news tabloid. Professional to the core yet provides the humus base for growing talents in the industry.

Jude is  very creative, intelligent and debonair. He has a fever devotion to duty and humanity. He is wise and astute too.

Around him you can feel the windows of the good, the bad and the ugly. It depends on the one you open.

Mr. Jude Atupulazi is someone I can call a complete personality because he’s a very impressive person both on the serious and on the informal sides of life. When it comes to his work as a journalist, he is an all-out professional. I see him as a perfectionist. Then when it comes to relating with people

informally, he is a completely jolly good fellow. He’s someone you can never get bored being with. He is kind and very good-hearted. I consider him a typical good man. 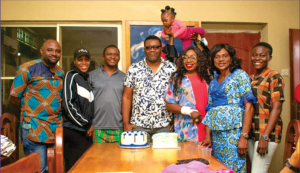 Jude Atupulazi will most likely not provoke dissension in a group. He is by nature a peace-loving and easy-going guy. He comes off real and has no truck with pretenders and charlatans. He abides no malcontent.

I have had cause to relate with him over a long period of time and I found him worthy of his trade. He pales a whole lot in comparison.

Though we may be slightly opposed in our social dealings, but we have common ground upon which we relate.

As he attains a new age, I wish him a happy birthday.

Jude is a man that cannot be measured by age. He is ageless, not just because he has penned down enough write ups to last him for ages, but because he has chosen to live a life disposed to self love.

I have watched him for years and come to the conclusion that Mr Atupulazi can do anything that will keep his body and soul together irrespective of how other persons might view that line of action. I love his love for simplicity, cherishing good things of creation without letting the worries of this world weigh him down.

As you mark your day of birth in this space, may God keep providing you with health of body and mind, so that your professional and personal contributions to humanity will continue to abound.

Without an attempt at a long epistle, Mr Jude Atupulazi holds an enviable record of mentorship which though primarily resides within the corridors of the media,

In him, most of us, young people, found a father who “tells it as it is” without mincing words. You could get angry, but won’t deny he has told you how you’ve gone from writing good stories the previous week to making your story look like what one of my professors described as “conversation between two mad men”. Laugh out loud!

You’ve just got to sit up with your grammar and tenses around him. He’s got zero chills for terrible English expressions, naughty attitudes too.

Conversations with him, even as a superior in the office and by many years an elder, was never the traditional “top to bottom” mostly obtainable at workplaces; they were rather friendly and in the most relaxed manner. He’s a great conversationalist and that you cannot take away from him.

Without an iota of doubt, if I had missed the foundation he gave me in news writing, and perhaps, writing generally, I may not be doing what I do today. He’s an Editor-in-Chief who is an editor indeed, editing texts and lives.

God bless Mr Jude Atupulazi and happy birthday to him!

I was with a priest friend in Austria, back in 2018, discussing about my plans to take up a job offer in Fides Media. His first question to me was, “How is Jude Atupulazi, is he still with Fides?” At the time, I hadn’t met Jude, so I knew little or nothing about him.

The priest continued, “Jude is such a strong voice in Anambra State. His writings stand as moral compass to many, keeping governments on their toes and shining the light of hope in a society darkened by strife, hardship and immorality.”

All that the priest said about Jude, I confirmed to be true, when, upon my return to Nigeria, I joined the Fides Media, as a Web Administrator. And just then, I also discovered that Jude was a mentor to many, in the pen profession.

He read my write ups a couple of times, and picked interest in me. He encouraged and pushed me to do more, corrected me when I erred and hailed me when I did well. He believed in me and mentored me in news reporting. Our many side talks in the office added so much value to my journey in life.

And finally, when a bigger opportunity beckoned, he recommended and defended me. I am sincerely grateful for the gifts of people like Sir Jude, as we call him. He is a blessing to me, to our society and our generation. Happy

birthday to you sir!

I could recall vividly sometime in 2009 when I met Jude Atupulazi at the Press Unit Government House Awka where journalists used to assemble to share ideas and discuss issues of urgent public importance. Then I asked him, ” how can one succeed in the journalism profession especially in Anambra state ?

He said to me ” as you lay your bed in this profession, so you will lie on it. Nobody tells anybody anything and no one tells you where something is happening. You have to dig it out yourself.” That was how Mr. Jude Atupulazi became a role model to me and I consulted him always and still consulting him till date whenever I needed advice or direction on how to get things right. He is one journalist and impeccable writer every young and upcoming journalist would want to emulate. Apart from his job, he is a fashion conscious person, down to earth and very sociable.

He really influenced my life positively and one of those who helped me to be more investigative in my practice. Today, the likes of Jude Atupulazi made me stand out amongst my peers in the profession. He is a rare gem. He is an oracle. He is a man unquantifiable. He is a dictionary of many discipline. Above all, he is a jolly good fellow.

A Graduate of the University of Jude Atupulazi.

Mr Atupulazi, as one who sweated to climb the rungs of success, is not fazed by affluence.

He has never mounted pressure on his children through unreal financial expectations. And at any chance he gets to address young people, he never fails to express his repulsion with financial shortcuts.

This is a virtue I admire in the man I’m proud to call father.

I guess they’ve said it all. You know, the best things in life, they say, are free. Happiness, according to Mr Atupulazi, is free and he always states that he will forever choose it even over money. I wish him, just like the rest of his family, friends, colleagues and mentees, a very happy birthday!!!