I just returned from Abuja a few days back, after an amazing weekend. I actually went for the birthday celebration of my little niece, Natachi Udeagha, who turned 10 years old on May 29. Now before you start wondering if it’s just because of the birthday of a 10 year old child that I had to travel all the way to Abuja, like most of my friends have asked, I’ll explain why. Natachi is the first child of my younger brother, Obinna. She is an adorable child who remained the centre of her parent’s lives after she was born 4 years into their marriage. She’s a smart girl who attracts attention wherever she goes either from the way she conducts herself like a little adult or her graceful manner which is rarely found in children her age. Her grades in school have always been top notch. She is indeed a child after her parents’ hearts. Unfortunately however, after she was born her mother found it difficult having another child. Her mother, Nkechi was a beautiful, quiet, humble, hardworking and unassuming woman. She was an epitome of motherhood. A true Christian, devout Catholic and the apple of our very eyes. We all loved her and continued to pray with her to have another child. Because God is always faithful and clear about the way he blesses His very own flock, He answered our prayers and Nkechi became pregnant once again. We were ecstatic. We thanked God everyday. We gave alms excitedly, in appreciation to God for his Mercy. Natachi herself became the happiest child ever as she continuously prayed for the gift of a sibling. Anyway, it was a long 9-month wait. Eventually, Nkechi gave birth to her second child. She named her Chetachi. A beautiful baby girl with skin so light and eyes so bright. Our joy knew no bounds. As for Natachi, she was the happiest 8yr old girl on planet earth. Everything was good and perfect. Life was good. Two weeks after, however, tragedy struck and Natachi’s mother slumped and died, leaving behind the heartbroken 8 year old Natachi and the very tiny 2 week old Chetachi. As for my brother, Obinna, I lack words to even explain his emotions when this tragedy struck our family.

Well, time they say has a way of healing all wounds. It has been 2 years and counting since we lost Nkechi to the cold hands of death. Our wounds have not healed but we have somehow been able to be blessed by the Grace, with which to move on, look to the future and keep our faith firmly in God, believing that he never fails.

Back to Natachi’s birthday. It would have been in Lagos where she lived with her parents. However, a year after her mum died, my elder brother’s wife decided to take in both Natachi and Chetachi into her home in Abuja, add them to her own three children and become their new mother. Ever since, those two girls have happily lived with her and her family and now call her mummy. Those two girls have been shown massive love since they moved to Abuja. The laughter they share is indescribable. The love is indeed massive. Obi, my brother goes to visit them regularly, and life is truly good.

So, this was why Natachi’s birthday party was celebrated in Abuja. When her mum was alive, she always talked about how she will throw a big 10th birthday party for her. That was why we decided we would all be around her on that day, knowing how emotional it would be for her. Surprisingly, when my brother asked later what she wanted at her party, she simply said that she did not want a birthday Party. All she wanted was for the whole family to go out for lunch at a Chinese restaurant and have a lot of fun. That was all she wanted. She did not want a party. Her father had to respect her decision. And so, all my siblings in Nigeria had to go all the way to Abuja to join at her birthday lunch. Believe me, it was splendid, unforgettable and emotional. 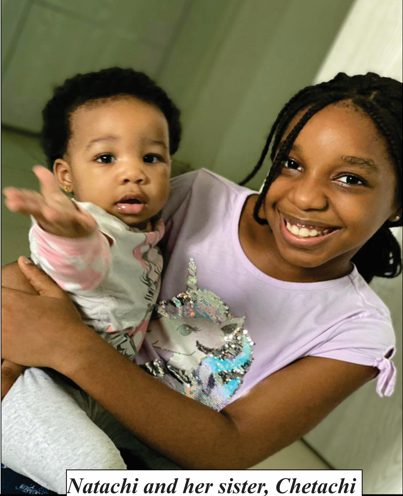 I had my moments through it all, either looking at her smile gleefully and looking really happy during our two hour outing at the Chinese restaurant. I kept seeing her mother in her. The resemblance was striking. I kept thanking God that her 10th birthday was special as her mum would have loved. It meant we kept to our own side of the bargain to be by her side. I would steal a glance at my dear brother Obi, looking as strong as ever, then I would silently thank the Almighty for giving him the Grace to forge ahead through his pain. Watching him struggle with an emotional 8yr old and a tiny 2 week old baby in the past 2 yrs have been particularly traumatizing. However, he has been wonderful and passionate about giving his girls the best.

So, we all had the maddest fun ever and so much laughter. Since Natachi didn’t want a birthday party, we finished with our luncheon and returned home to do the courtesy of cake cutting and her birthday was pretty wrapped up. I am happy that I was able to make it to her special day. Most importantly I am happy that 10th birthday was as special as her mother always dreamed it to be. I guess that’s what gave my siblings and I the most satisfaction. I hope have been able to answer the question of those of my friends and acquaintances who said they couldn’t understand how come I went all the way to Abuja just for a 10th birthday of a little girl. I hope they understand that it goes beyond just attending a birthday. That journey was about family. It was about love. It was about making sacrifices. It was about appreciating people for the little acts of kindness and their little gifts of love to members of the family.

I tried imagining what Natachi’s day would be like if we hadn’t all come together to make her feel special. She might even begin to cry about her dead mother, knowing that her mother promised her a massive 10th birthday party and was no longer alive to give it to her. She was first of all, very shocked that all her uncles and aunts flew in to Abuja just to be with her on her 10th birthday. Just looking at her beam with smiles when we all turned up was satisfying. I was the last person to arrive because my flight from Asaba was delayed. When I eventually made it to the house late in the evening, she wasn’t home. I was told she went to make her hair next door. When she returned and knocked at the gate, i personally, went to open the gate and her scream when she saw me, made my day. She asked, Auntie Uche, are you here for my birthday??? And my answer was ‘Yes’. She jumped on me and held on in excitement. That moment, my day was made.

I want to thank in a special way, my siblings who made it to Abuja, all for family. I thank my brother’s wife, Mrs Sekinetu Udeagha, who sacrificed so much just to see that my little nieces have a better life, even without their mother. I was deeply touched when I got to Abuja to discover that they now call her ‘mummy’. It’s touching because what it simply means is that she treats them like her very own. In case you’re wondering how come her name is Sekinetu, she hails from a core Muslim family in Edo state, but is now a very active member of the CWO in her parish in Abuja. 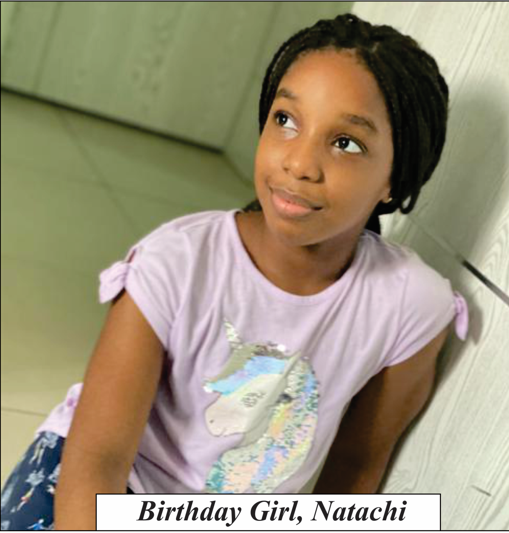 I want to appeal to my fellow women all over the world to learn the art of making sacrifices in any family they find themselves married into. Peace and love in any family matters. It brings progress in the family and creates a bond that is unbreakable. When Nkechi gave birth to her two girls, how was she to know that she would not be alive to raise them herself? If she was mean to Sekinetu when she was alive, maybe she wouldn’t have the mind to take her girls after she died. Sekinetu made a huge sacrifice by taking those kids and I will forever be indebted to her for that show of love. I am trying to explain that family is all about love. It’s all about sacrifice. It’s all about giving. It’s all about sharing.