This week on the “Inspirational Personality” page of Fides Newspaper, we would like to invite you into the life and rhythms of someone that is better described as a colossus.

The write up below is from the homily by Rev. Dr.  Chuma Anyaka at the 90th birthday celebration and 57th priestly anniversary Mass of Rev. Dr. Johnson Ojiako, the oldest Priest in the Catholic Dioceses of Awka and Ekwulobia, on Sunday August 21, 2022.

The text of Fr Anyaka’s Homily:

We thank the Almighty Father, through His Son, Jesus Christ, our Lord and Savior, for the blessing of this day.  This day, we celebrate, with our great brother priest, a great innovative mind, Fr. Johnson Ojiako, the 90th year of his birthday. He has beaten the Bible estimate of human longevity: “seventy years is all we have – eighty years, if we are strong,” Psalm 90 tells us.    One wonders why the psalmist did not talk about the super strong like Fr. Johnson Ojiako who beat the record by more than a decade and counting.  Nobody here is as strong as he is, that I can tell you.  It is an honor to celebrate the Eucharist with him. 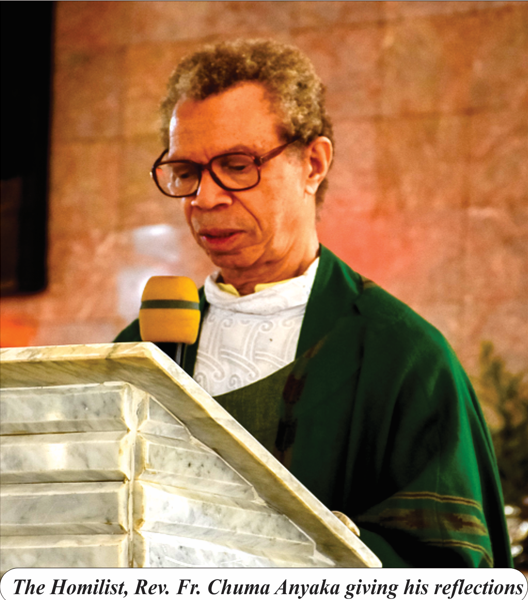 Fr. Johnson Ojiako and I could not have met earlier. For my secondary school, I went to St. Peter Claver Junior Seminary, Okpala, in Owerri diocese.  For his secondary school, he went to the government College, Umuahia, in the same Owerri diocese. At his time, the government college Umuahia was the Nigerian Oxford of England or Harvard of the United States of America.  Only the cream of the cream of candidates could get admission to study in that college. At the Umuahia government college, he served as the prefect of the college.  He served also as the choir master of the Catholic community at the college.  More importantly, he served as the leader of the group of students dedicated to the defense of the Catholic faith.  Perhaps, this gives you a first impression of this great mind sitting over there.

Fr. Johnson Ojiako arrived at the Bigard Major Seminary one year ahead of me.  As a result, he and I attended the same philosophy classes for two years before Archbishop Charles Heerey, of blessed memory, sent him to the University of Innsbruck, in Austria, to study theology. 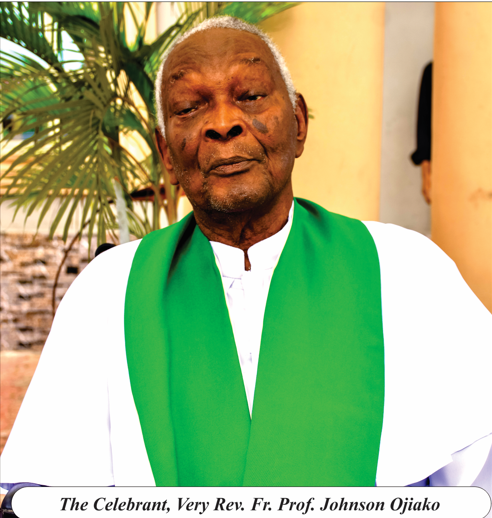 At Bigard, I knew him as a tall man, ranking in height with the late Fr. Tagbo, Fr. Ikeme, now retired and at Enugu, the late Cardinal Tumi and Fr. Ntze both from the Cameroons.  I observed that he walked in long strides but at a moderate speed. His single step would be double for many like me to catch up with him.

Besides that, he excelled in academics, he loved music.  He loved to play the organ, the only organ in the seminary of about 60 students in theology and philosophy combined.  He played at Masses, benedictions and at the stations of the cross. He, also, had a penchant for the classical music of Handel, Mozart, Hayden, Beethoven, and Hubert.  Whenever he strided to the organ location to play, he usually would carry his organ music books and manuscripts in his left hand, raised to his elbow level and against the left side of his chest.  When engaged in conversations, he spoke in measured language, punctuated by moderate decibel laughter.  He was friendly and courteous but very disciplined, morally and intellectually.

In 1960, Archbishop Charles Heerey of Onitsha, of blessed memory, who ordained me a priest in 1966, sent him to study theology at the University of Innsbruck, in Austria.  Founded in 1669, the University of Innsbruck was more than an ordinary University. It was “the largest and most important research and education institution in western Austria.”   It has since then, ranked, worldwide, as one of the best in teaching and research.   A research institution, such as the University of Innsbruck, is set up to attract innovative thinkers as well as to encourage and support innovative thinking. The University of Innsbruck produced Dr. Nadeen B. Sabha, a distinguished “postdoctoral researcher in the Institute of Astro-and particle physics” in the University of Innsbruck.    He became the first astrophysicist from Austria to head the research project of the National Aeronautics and Space Administration (NASA) at the new US James Webb Space Telescope (JWAT).  The University of Innsbruck also produced Karl Rahner, a German Jesuit, who, with Joseph Ratzinger, now Pope Benedict XVI Emeritus, were among the seven leading Theologians of the 20th century that Pope St. John XXIII appointed to prepare and direct the working documents and the presentations of the Second Vatican Council.  You recall that it was this Council which met from 1962 to 1965 and which opened the windows of the Catholic church to the modern world.  His key influential impute in the Council centered on the documents on the nature and structure of the Church of Christ (Ecclesiology).

To understand the development of the innovative thinking of Fr. Johnson Ojiako, which has informed his approach to his priestly and missionary services to the people of God, we need to dig a little bit deeper into his teacher and mentor, Karl Rahner.

Unlike Heidegger, Karl Rahner believed in the integration of philosophy and theology.  He believed that “theology implies a philosophical anthropology,” and that “human existence implies the experience of God.”  This idea, underlying his expertise in the nature and structure of the Church of Christ, was incorporated in the Vatican II Pastoral Constitution on the Church in the modern world. Among other things, the document affirmed that in Christ “can be found the key, the focal point and the goal of man, as well as of all human history.”

Karl Rahner was outspoken and frank in his approach to issues, contextual in thinking, “creative, challenging and non-traditional – in his – approach to theology” and to other issues.

He did not only influence the Second Vatican Council deliberations and presentations, he also profoundly influenced our big brother here, Fr. Johnson Ojiako whom he taught and mentored at the University of Innsbruck.

In our lifetime, at some point or other, we have been influenced by some significant other.  The significant other for Fr. Johnson Ojiako was Karl Rahner.  He cultivated the intellectual skills of this extraordinary teacher and mentor at the University of Innsbruck to embellish his own natural endowment.  He is outspoken and frank in his approach to issues, contextual in thinking, “creative, challenging, and non-traditional – in his – approach to pastoral and other issues.  He sees an idea against the backdrop of other ideas associated with it.  Often, he looks at issues from a non-traditional point of view but, in the same vein, expressive of the mind of the church. These skills are recognizable in his works and communications.

In this circumstance, it is not possible nor desirable for me to mention all the brilliant initiatives that have decorated his 57 years of priestly ministry in the sanctifying mission of the church and to make the church come alive to the modern world, particularly in the province of the archdiocese of Onitsha.  However, I’ll give you just three salient examples of the products of the innovative but orthodox thinking of this great priest.

In his services as a teacher at All Hallows seminary, Onitsha, as the personal secretary to Archbishop Arinze of Onitsha, as a professor at the Bigard Memorial Seminary, Enugu, as a lecturer at the University of Nigeria, Nsukka, and as a parish priest in the Archdiocese of Onitsha and the diocese of Awka, he was outspoken, frank, innovative, positively challenging, and non-traditional in his approach to pastoral issues and situations. His invaluable contributions to problematic pastoral situations where most welcomed because he invariably came up with a dimension or a perspective of the issue in point that the rest have missed but needed to consider before an appropriate decision or resolution.

One of the products of the innovative mind of this great man was his initiative which led to the development of the congregation of the Sisters of the Daughters of Divine Love. (DDL.)

To be continued on next Edition