During the civil war, 1967-1970, with the Federal troops advancing on the Biafran territory, the existing female religious organizations within Biafran territory, faced an existential threat to the religious life of their members.  They feared the violation of women, nuns included, during a large-scale war.  The rape of women has always accompanied large-scale wars in history.

In World War II, it was weaponized by both sides to “terrorize the enemy civilian population and to demoralize the enemy troops.”   The problem they needed to resolve was whether to continue to hold the aspirants or to let them go, so that they would have only the professed nuns to worry about. The recruitment of new aspirants was out of consideration. 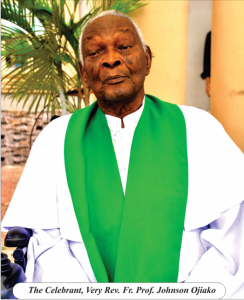 What then happened to those girls who aspired to a consecrated life, but did not know how to fulfill their aspiration?  This was where Fr. Ojiako came into the equation.   Just returned from Austria in 1967, and living at Adazi Parish House, he identified this group of girls who have already identified themselves and have organized themselves into a small prayer group at Nneni, an outstation in Adazi Parish.

This was a new idea in the tradition of the church in Igboland, to have an association in accordance with canon 605. This canon allows an association of aspirants to a consecrated life of chastity, perfect charity and obedience (Evangelical Counsels) without public vows.

When Fr. Ojiako was transferred out of Adazi Parish to become the parish priest of Ukpor Parish, he did not leave those aspirants behind. In consultation with the late Msgr. Meze and with the approval of the then Bishop Arinze, he built a home for them at Ukpor and have them come over to Ukpor to live there in their new home.

When, Bishop Godfrey Okoye, of blessed memory, visited Fr. Ojiako at Ukpor, he learnt of this group of girls.  He took interest in them. Using his episcopal powers, he added more aspirants to the existing number.  By 1969, Bishop Godfrey Okoye had gotten the approval of the Apostolic See to form a religious congregation with this set of girls.  He called them the Daughters of Divine Love.

He designated himself as the father founder and Fr. Ojiako as the director.   It can then be truly said that the initiative of Fr. Johnson Ojiako planted the seed which Bishop Okoye, of blessed memory, grew into the big tree that today is known as the congregation of the Daughters of Divine Love.

The second initiative: Today, we are familiar with the powerful Christian Mothers Association.  But, we are not familiar with its origin in the initiative of this great innovative thinker, Fr. Johnson Ojiako. 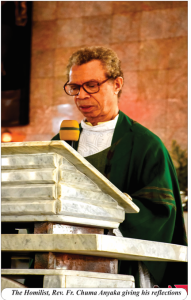 The membership comprised Catholic women without regard to their standing in the Catholic Church.  Fr. Johnson Ojiako took exception to the combinations in the group. He had a different idea. He believed that those who raised and maintained a Christian family should be recognized and distinguished from those who did not.  He based his distinction between a Christian and an unchristian, family, though Catholic, on the decree of Vatican II on the Pastoral Constitution of the Church in the Modern World, which states that a Christian family springs from marriage, that is, with the Sacrament of Matrimony.

Moreover, the testimony to Christ, in the modern world, demanded the distinction and recognition. He worked hard to ensure that only those who married validly in the Catholic Church and who stayed in the marriage belonged to this new association with independent executive but remained under the umbrella of the Catholic Women Organization.  He did not call the group Catholic Mothers Association.

The powerful influence of the Christian Mothers Association in our local churches today that make the local churches come alive in the modern world grew from the idea of this great mind, Fr. Johnson Ojiako. This is, no doubt, an immense contribution to the sanctifying mission of the church in the province of the Archdiocese of Onitsha.

The third exhibit of the product of this innovative mind was his establishment in 1974, of the Christian Service Association dedicated to charity and the sanctifying mission of the Church.   The members live the consecrated life according to the evangelical counsels of chastity, perfect charity or poverty and obedience as they actualize their dedicated common interest through the exercise of their careers.

They have the option to live or not to live in communities exclusive to them.  If they choose, they may live in other forms of acceptable communities not necessarily religious.   Though the members of the Christian Service Association take public vows, they are not classified as a religious institute in the canonical sense.  This Form of consecrated life is consistent with canon 605 which recognizes that a life of total consecration according to the evangelical counsel can be fulfilled in diverse ways.”

The Christian Service Association formed by Fr. Ojiako is one of those diverse ways. The association is not a diocesan religious institute but could be elevated to that status if the conditions are met and with the approval of the Apostolic See.  This association is the first of its kind in our region.

In conclusion, the celebration of what this great priest has done during the past ninety years of his life ties into the gospel of today.  He spent them teaching and helping people, in diverse ways, to enter the kingdom through the narrow gate.  This was his way to fulfill the mandate of Christ that we love one another just as he has loved us . We wish him many more years of service in this noble cause in Jesus name.