A Catholic diocese in the Australian Outback has announced plans to open the first K-12 Catholic school named for Blessed Carlo Acutis.

Blessed Carlo Acutis College will “have at its heart a daily life of prayer and devotion to the Blessed Eucharist where all students will have the opportunity to build a deep friendship with Jesus,” according to its founding bishop.

In an interview with CNA, Bishop Columba Macbeth-Green said his diocese wanted to give its new school a heavenly patron that “the children could be inspired with in their faith.”

Blessed Carlo Acutis was a young Catholic from Italy with a passionate devotion to the Real Presence of Jesus in the Eucharist and an aptitude for computer programming.

In 2020, Acutis became the first millennial to be beatified by the Catholic Church and is now one step away from canonization as a saint.

“He’s a young man with devotion to the Holy Eucharist, which is the center of our school, and up with the internet, with the things young people today are dealing with: how to be a saintly person in today’s world,” said the bishop of Wilcannia-Forbes, a diocese covering the Far West region of New South Wales.

“I just thought: ‘Well, he’d be an obvious patron for school.’”

When Blessed Carlo was an elementary school student, he would often ask to stop to pray in front of the tabernacle of his parish, which he passed during his walks to and from school. 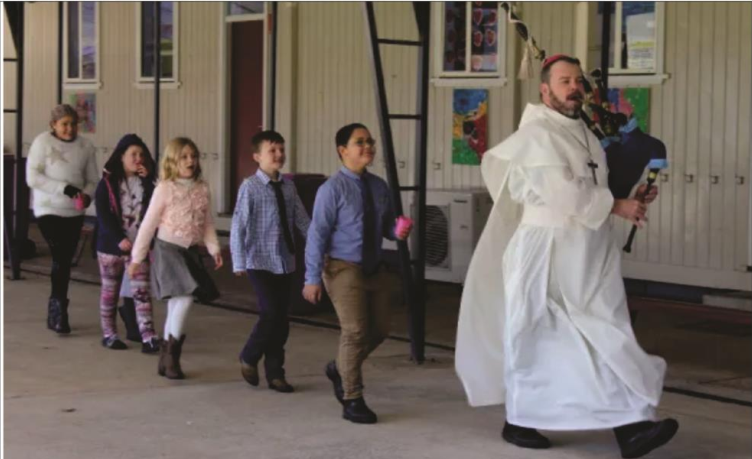 “At the center of the school is going to be the chapel. Everything comes out from there,” Bishop Columba said.

“Even in the design of our chapel, it will be so that the children can come in and make their visit [to the Blessed Sacrament], which will be a part of the daily routine of the school in imitation of Blessed Carlo,” the bishop said.

Bishop Columba is a firm believer that a greater focus on the Eucharist can provide a spiritual renewal of Catholic education.

“We need to set our young people up with a love for our Lord,” he said.

He added: “We need to really get back and rediscover and actually live our faith because that’s where we get our nourishment from.”

“And we can see in the Church around the world today what happens when you lose that. People go away. Young people don’t come to church because they don’t have that relationship.”

Bishop Columba just finished revamping his diocese’s religious education program to equip students to both know the doctrines of the Catholic faith and to live the faith with an “intimate relationship with our Lord.”

“What the kids were actually learning wasn’t the fullness of the faith,” the bishop explained.

“A lot of the meat had been taken out of it, so to speak, the doctrines,” he said.

The new school will have a liberal arts curriculum and its religious education based on the Montessori method, with a “hands-on” focus on the Eucharist and the Mass.

“I want the children to really know their faith, be able to live their faith, but actually have a personal relationship with the Lord as well,” Bishop Columba said.

“Get your doctrines, get your meat, but reflect on it and make it go from the head to the heart … The best way for that reflection is with Adoration, the Holy Eucharist. That’s when you actually spend time with the One that you’re learning about,” he said.

Bishop Columba comes from a contemplative monastic background. He was ordained in the Order of Saint Paul the First Hermit, also called the Pauline Fathers, whose charism includes contemplation of God in solitude and a love of liturgical prayer.

The bagpipe-playing bishop grew up on a farm in his diocese and served as a police chaplain in Wagga Wagga before his appointment brought him back home to the outback.

Internet in the Outback

Roughly the size of France, the Australian Diocese of Wilcannia–Forbes is the largest Catholic diocese in the world with no coast and no town with more than 20,000 people.

“Where I live here at a chancery office and my house is nine hours’ drive to my cathedral,” Bishop Columba explained.

With such an expansive territory, the diocese’s Catholic schools already rely heavily on technology to connect students in remote areas.

“Some of our little tiny schools have virtual classrooms already with other schools, so two or three of our schools can come together and do science class together and they might be 100 kilometers [60 miles] apart,” he said.

As technology already plays an important role in the classroom, the bishop said that he wants to ensure that his students are learning to use technology in a balanced way, so that the virtual world does not replace actual relationships and community.

For this, Blessed Carlo can be a model. From the ages of 12 to 14, he designed a website cataloging Eucharistic miracles that have occurred around the world, which he launched in 2005.

He died of leukemia a year later at the age of 15, offering his suffering for the pope and for the Church.

“You can be holy as a young person,” Bishop Columba said. “And I think that’s so powerful … I mean that I would not be doing my job as a bishop if I neglected that.”

Blessed Carlo Acutis College is expected to open in 2024 with an eventual enrollment of around 300-500 students.

The COVID-19 pandemic, which has recently hit some of the diocese’s indigenous communities particularly hard, has delayed construction of the school.

Bishop Columba recently returned from spending two weeks ministering to the remote indigenous communities “to help them through that difficult time, give them a bit of hope.”

“We’re a little marginal diocese, which is very marginal in Australia, as we would say, it’s in the Outback. So this is our first diocesan high school,” he said.

“It is an honor to name our school after such an inspiring young person who showed that children and teenagers can live lives devoted to God and to caring for those around them.”