Twenty-six Catholic bishops, hundreds of priests, consecrated persons and many individuals from various strata across Nigeria, on Friday, March 5, stormed St Joseph’s Cathedral, Ekwulobia, Aguata LGA, Anambra State, for the One Year Anniversary of the erection of the new Catholic Diocese of Ekwulobia, reports Ifeoma Ezenyilimba.

Fides gathered that the anniversary doubled with the fund raising for the actualization of diocesan projects.

This is even as the Catholic Bishop of Awka Diocese, Most Rev Paulinus Ezeokafor, has assured that the two dioceses will continue their mutual cooperation and collaboration. 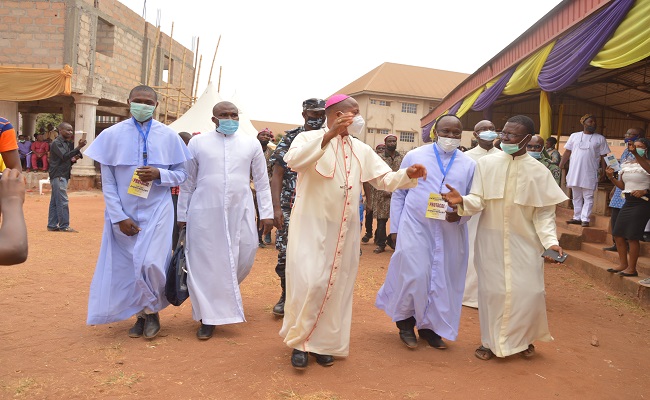 Speaking on the occasion of the One Year Anniversary, the pioneer Bishop of the Catholic Diocese of Ekwulobia (CADEK), Most Rev Peter Ebere Okpaleke, thanked God for the gift of the diocese and his grace which had been sustaining the diocese. He attributed the successes of the one year old CADEK to dedication to the work of God and the unflinching support of the faithful.

Bishop Okpaleke, who said the diocesan family was edified and grateful to God for the gift and growth of the diocese, thanked all who graced and supported the event. The Catholic prelate appreciated his brother bishops, who according to him, had been so supportive; the superior generals of various congregations and institutes; the Secretary General of the Catholic Secretariat of Nigeria, Rev Fr Zachariah Samjumi and many others, for their presence and support.

The Catholic prelate also appreciated the Governor of Anambra State, Chief Sir Willie Obiano, for his support; as well as commended the anniversary and fund raising committee led by the Vicar General, CADEK, Rev Fr Prof Anthony B.C. Chiegboka, for their sacrifices which contributed to the success of the event.

The Catholic Diocese of Ekwulobia in the address that was signed by the Bishop, Most Rev Peter Okpaleke; the Chancellor, Rev Fr Lawrence Nwankwo and the Vice Chairman, Diocesan Pastoral Council, Chief Sir Dr J.J Ezeokafor, KSG, recalled that the diocese was created in the heat of coronavirus pandemic on March 5, 2021.

The diocese in the address, appreciated all that were instrumental to her creation, and solicited for donations in support of her projects.

According to the Catholic Diocese of Ekwulobia, her teething and pressing needs included a secretariat to enable the diocese to vacate the class room block that temporarily served the purpose; a spiritual year seminary and formation centre for the ongoing formation of the priests and lay faithful; a chancery, a retreat and pastoral centre, and accommodation for priests working at the chancery.

Others were science laboratories and dormitories for the upgrade of St Dominic Savio Seminary, Akpu, to a senior secondary level; sponsorship of seminarians to priesthood and parcels of land for development.

Earlier, when he led in the concelebrated Anniversary Thanksgiving Mass, the Papal Nuncio to Nigeria, His Excellency, Most Rev Antonio Guido Filipazzi, in his homily, thanked God for the growth of the new Ekwulobia Diocese, which, he said, the remarkable numerical growth of the mother diocese, Awka, necessitated its creation.

The Papal Nuncio commended Bishop Okpaleke for what he described as exemplary and rare strides which grew the diocese to an unprecedented level within one year of its erection.

Most Rev Filipazzi, who also called on Nigerians to seek the face of God for the healing of their land, condemned what he described as the negative effect of tribalism in the Church. According to him, such portrayed great danger for the body of Christ.

In his remarks, the President, Catholic Bishops Conference of Nigeria (CBCN), Most Rev Augustine Akubueze, congratulated Bishop Okpaleke and the entire diocesan family on the anniversary.

He urged Bishop Okpaleke to be a leader that would consult when necessary and lead the people on the path of love and peace so as to enable the new diocese of Ekwulobia to be a reference point for others.

Most Rev Akubueze, who is also the Catholic Archbishop of Benin Archdiocese, in his goodwill message to Most Rev Okpaleke, commended him for his pastoral and infrastructural developmental strides which he described as amazing.

The Metropolitan Archbishop of Onitsha Ecclesiastical Province, Most Rev Valerian Maduka Okeke, in his message of goodwill, described the anniversary as a celebration of one year of enriching togetherness as the people of God. He appreciated all whose seed of faith and determination led to the birth of the new Catholic Diocese of Ekwulobia.

For his part, the Governor of Anambra State, Chief Sir Willie Obiano, welcomed the Papal Nuncio, the bishops and others, to the state in honour of the newest diocese in Nigeria.

Gov Obiano, who recalled that COVID-19 almost hindered the participation of people in the April 29, 2020 inauguration of the diocese, congratulated the new CADEK for her unprecedented growth within one year of its existence.

History has it that CADEK which focused on grassroots evangelization, with emphasis on the family, systematic catechesis, collaborative ministry and human development, at creation, had 245 priests, 55 major seminarians, 276 minor seminarians and 127 catechists.

The diocese ordained three priests in 2020 and has lost three priests since its creation. A total of 13 religious priests, 3 brothers and 113 consecrated women are working in CADEK.

We Will Continue Collaborating, Cooperating, with Ekwulobia Diocese – Bishop Ezeokafor

The Catholic Bishop of Awka, Most Rev Paulinus Chukwuemeka Ezeokafor, has assured that the collaboration and cooperation which have been existing between the diocese and her daughter diocese, the Catholic Diocese of Ekwulobia (CADEK), will continue.

Bishop Ezeokafor gave the assurance in his remarks at the celebration of the one year anniversary of the erection of the Catholic Diocese of Ekwulobia held on Friday, March 5, 2021, at St Joseph’s Cathedral, Ekwulobia, Aguata LGA, Anambra State.

The two books which have Lawrence Nwankwo, Michael Muonwe and Anthony Ezeokeke, as editors, were published by Fab Educational Books, Awka.

In his speech, the Bishop of the Catholic Diocese of Ekwulobia, Most Rev Peter Ebere Okpaleke, thanked the Holy Father, Pope Francis, through whom, he said, God gave the faithful of CADEK the new diocese; and the Papal Nuncio, who was the link to the Holy See.

Most Rev Okpaleke equally thanked the Catholic Bishop of Awka Diocese, Most Rev Paulinus Ezeokafor, and the former bishops of Awka Diocese, Most Rev Simon Akwali Okafor, and Archbishop Albert Kanenechukwu Obiefuna, for shepherding the flock before the creation of Ekwulobia Diocese and for their requests which led to the birth of the new diocese. He commended his brother bishops for being very supportive.

Pointing out that the enthusiasm of the Diocesan Family of Ekwulobia from March 5, 2020, when the diocese was erected till date, had been phenomenal, the bishop thanked the priests, the consecrated persons and the lay faithful of the diocese, as well as others, for their support which, according to him, had been unflagging.

He solicited for more support from all to enable the new diocese to attend to her teething needs among which were infrastructure, and to live out the vision of being the family of God it was constituted to be.