Catholic Church and Payment of Ransom to Kidnappers

I was born a Catholic, raised a Catholic and still proudly practice my Catholic faith, for almost five decades now. One of the things I love about the Catholic Church is its universality. If it’s Palm Sunday in Nigeria, it will definitely be Palm Sunday in Canada, Holland, Luxembourg, India and South Africa.

If it’s the feast of Christ the King in London, it’s definitely going to be the same feast day in Japan, Angola, Australia, Italy and Ghana. So, it’s a universal church that thrives on order and regularity. I have always said that any day I leave the Catholic Church, I will definitely not opt for another denomination as no denomination can beat my Catholic Church.

I’ll tell you how. Sometime in September, I was very shocked to receive news of the kidnap of my cousin, Rev Sr Jacinta Chinwe Udeagha. She was kidnapped alongside some priests and the Assistant Cathecist of their Parish in far away Mamfe, Cameroon. They were nine in number, including their cook. 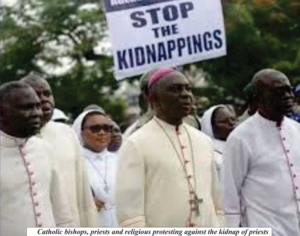 They were kidnapped from their Parish premises on the fateful day. The crazy thing was that our family had no idea that she was kidnapped until her younger sister saw the information on Facebook and it was most shocking as nobody saw that coming. She had to raise alarm and bring the news to our notice.

The first time I saw the pictures of the kidnapped priests and religious that went viral, I was I shock for days, but eventually, I mustered up courage and told myself that there was no way they would be allowed to be in the Kidnappers den for too long since the Church was involved. To my utmost shock, they remained there for weeks that eventually turned to a month and even more. My entire family was thrown into panic.

We weren’t sure if they were still alive or not. At a point, we got the information that their captors had named a price to the tune of N25million. Even at that, we still hoped the Church would do something.

We were however wrong. The Church did nothing. As a matter of fact, a video was posted on social media and in the viral video, my cousin and the other kidnapped victims were seen sitting on a bench and their spokesperson who I believe is a priest, was seen pleading with the Bishop of Cameroon to obey their captors and pay the ransom so they would be released, because they were sick.

I looked at the people in the video and observed that some of them had swollen eyes and faces. I saw my cousin and noted that her veil was not on her head. I was heartbroken seeing her like that before the world. I was filled with sorrow and fear of the unknown.

They looked beaten. What will come next? I was really scared. But then again, part of the reason for my fear was that I already saw the news posted on social media , that the Bishop of Mamfe diocese, Cameroon had made it clear that he was not going to pay a dime to the kidnappers.

He maintained that paying ransom each time a priest or religious was kidnapped would make kidnappers kidnap more priests, therefore, even if he is kidnapped in the future, nobody should pay any ransom to have him released.

Those were the words of the Bishop of the Catholic Diocese of Mamfe, from where my cousin and her fellow parishioners were kidnapped. You know, I tried to make sense out of the reason given by the bishop but just couldn’t. As a matter of fact, even when these ransoms are paid, some of these dare devils  still go ahead to kill their helpless victims.

My question was, what if these people got angry and killed them like is usually the case when family members of kidnapped victims refuse to pay ransom. What if the reverend Sister and the other two female victims were raped???? The reasons given by the Bishop just didn’t sit well with me and the entire members of my family.

I realized it was not just a Mamfe diocesan law. It was a universal directive that ransoms are not to be paid even if a hundred lives are at the risk of being taken by kidnappers of Catholic priests and religious, no matter what. Unfortunately, I have my personal reservations about that issue and I really have to say it.

When my cousin, Sr Jacinta Chinwe Udeagha did her final profession at the Catholic diocese of Nnewi, some years ago,  I remember that all the items our family provided for her sent off into the sisterhood was collected by her congregation. We were made to understand that those things were not to be personally used by her, but by the congregation.

It meant that she was now a property of the Catholic Church. She personally had no belongings and even if she were to be transferred to another town or state or country, those things would be left behind for whoever was going to replace her to keep using. It was a clear message and we understood it perfectly. We had no problems with it.

We understood that she was now out of our hands and fully in the hands of God to whom she placed herself as an object of sacrifice. Now, I’m coming back to the kidnap situation and my question to all the Catholic bishops reading this is: why is it a problem to save her life and that of other priests even if it means paying that ransom secretly? Again, if the Holy Catholic Church in all her wisdom refuses to pay ransom for her priests and religious, why can’t they let the family of those people take up that responsibility instead?

How can people devote their lives to serve God and when they fall into such a deadly trap, the Bishop will refuse to do the needful? Believe me, I have tried to understand the rational behind the Catholic Church  refusing to pay these ransoms, especially as human lives are involved. Believe me when I say that I find it unacceptable.

I remember the young seminarian that was kidnapped a few years ago at Kaduna. He wasn’t lucky. The kidnappers who held him hostage eventually killed him and I know that family will never recover from that ordeal in a long time to come . My appeal goes to the Catholic Church to remember that even though these people are now full properties of God, their families who gave them as gift offerings to the Lord are also at the receiving ends at a time like this.

Knowing how thorough the Catholic Church is, I strongly believe that they put a lot of factors into consideration before reaching the decision to rule out anything concerning paying ransoms to kidnappers when these servants of God are kidnapped. However, I believe that heaven helps those who help themselves. Rev Sr Jacinta Chinwe Udeagha is my cousin.

Her late dad and my late dad were siblings. The same mother and father gave birth to them. I can’t even describe the depth of our restlessness and fear throughout the period they remained in the custody of their captors. I wouldn’t have forgiven the Catholic Bishop of Mamfe Diocese if anything had happened to her. Honestly.

I however thank God that they have been freed finally even without any ransom being paid. It can only be God and the intercession of our Mother Mary, Mediatrix of all Graces. It is indeed a miracle and a thing of joy. My prayer is that these kidnappers will never know peace anytime they decide to kidnap any ordained priest of the Catholic Church, Rev Sister, or even any church worker.

The God they serve will continue to guide, guard and protect them through Christ our Lord, Amen! May I also seize this opportunity to thank you all for your prayers and words of encouragement while we waited for their release. Daalu nu!!!