The Catholic Faithful in Awka Region have thrown their weight behind the projects which have been conceived by the diocesan bishop, Most Rev. Paulinus Chukwuemeka Ezeokafor, through their impressive cow gifts pegged at fifty thousand Naira each, among other gift items. The massive support was in demonstration of their faith and in solidarity with the actualization of projects that will help to change the face of the earth, report Chioma Ndife, Mmadubuchi Onwumelu, Mercy Hill, Adejumoke Aminat Alebiosu and Zita Chidera Ezeno

The Cathedraticum, a period specifically designed for the Catholic faithful to give support to their diocesan bishop, was held on Holy Thursday, April 14, at the regional headquarters, St. Patrick’s Cathedral, Awka, Anambra State.

The event which was an opportunity for the faithful who had gone for sacramental confession to obtain indulgence, featured renewal of priestly vows by the priests, blessing of the oil of the catechumen and oil of the sick, as well as the consecration of the Chrism Oil.

Fides gathered that the three types of oil would be used by the Church for the administration of sacraments across the region for the next one year. It also observed that the sick were supported with the oil of the sick by the priest. The oil of the catechumen is used at baptism to initiate one into the Christian fold, while the chrism oil is used as a sacred oil for baptism, holy order and anointing of kings. 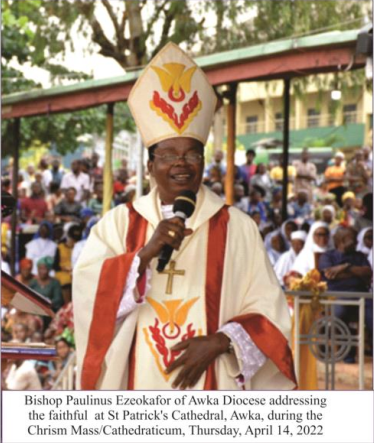 In the schools category, Tansi International College took the lead with 22 cows, leaving the second and third places for St. Patrick’s College and St. John of God Secondary School with 16 and 15 cows, respectively.

Speaking at the occasion, Bishop Ezeokafor thanked the regional members for the constant support which they had been giving to the diocese since its creation. He said their support had been instrumental to the completion of some diocesan projects, especially the Peter University, which they had received approval to commence.

In his homily during the 2022 Chrism Mass/Cathedraticum held at Awka Region at St. Patrick’s Cathedral, Awka, the Bishop of Awka Diocese, Most Rev. Paulinus Ezeokafor, began by explaining that the celebration was for the commemoration of the institution of priests, the blessing of the oils of Chrism, Catechumen and the Sick, and the presentation of gifts by the laity to support the work of the Diocese (Cathedraticum).

He said that priests were specially selected from the laity to serve as ministers and he encouraged the priests to be holy, to hold sacred the sacraments of the Church; particularly the Sacrament of the Eucharist and Penance, and to be servants at all times.

He also implored the laity to pray for their priests and the Church and to give their unalloyed support to the Church. He added that faith was essential for the good practice of Christianity.

He thanked God for the successful election and swearing in of the new governor of Anambra State, Prof. Charles Chukwuma Soludo. He urged everyone to support the government for the development of the state; even as he emphasized the need to “see something, say something, and do something”.

He decried the marginalisation of the Igbos in the country, even though he decried the use of violence to support the Igbo cause, noting that a typical Igbo man abhorred killing, while urging everyone to ‘shine their eyes’.

He announced that the government had licensed Peter University, Achina, and implored the support of all to make the dreams of commencing academic activities in the university by October this year come true. He expressed his gratitude to everyone that had contributed in various ways to the university project and made it known that plans would be made to map out scholarships for brilliant but indigent students. He said the Diocese was passionate about human development. 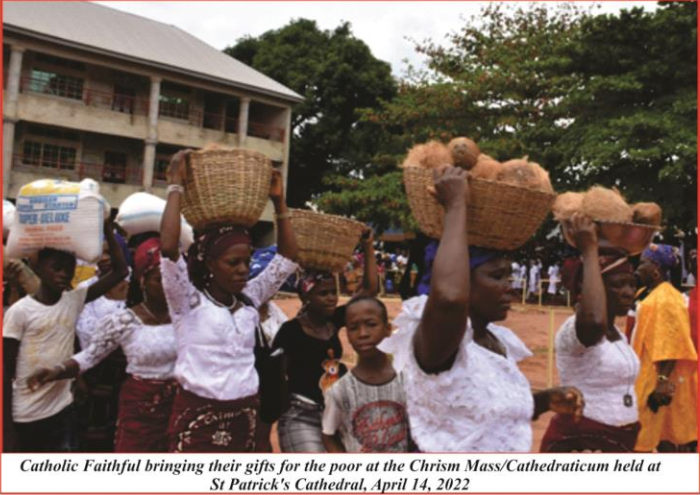 Bishop Ezeokafor reiterated that burials should not exceed two months after a person’s death and that there should be no production of brochures. Printing of prayer cards and a brief biography of the dead, he said, were permitted. He noted that the rule was stated in ACTA No. 104, signed by the former governor of Anambra State,  Willie Obiano, and added that SYNOD ACTA No. 108 stated that clearance should be done for only the deceased, both in the home parish and parish of domicile, if the deceased stayed outside their home parish.

‘SYNOD ACTA No. 95 exempts octogenarians and persons above 80 from paying church levies unless one voluntarily decides otherwise,’ Bishop Ezeokafor stated.

He read an apology letter signed by Dr. Ifeanyi Okoye, the CEO and Founder of Juhel Nigeria Limited, for producing brochures during the burial of his mother and reminded the congregation that being a good Christian entailed obeying the rules of the Church and the state and carrying out all obligations expected of one.

He harped on the vital place of the family in child upbringing and exhorted parents to handle their responsibilities effectively, to ensure they brought out time to spend with their children, to talk to them about God and to pray together.

The prelate went on to advise them to question their children’s character as need be, and to take appropriate steps to curb any bad behaviour observed.

He said a committee headed by Fr. Joseph Nwana was in charge of the Year of the Youth aimed at holding programmes to properly train youths.

His words, ‘It is essential to groom intending couples as they are the foundation of families. They should observe the three-month marriage course.’

Bishop Ezeokafor, who directed priests to see to the adherence of that, said the Diocese had produced a manual for marriage course at the cost of N800, while noting that the fee for training seminarians was now N3, 000 000. He asked for sponsorship of the training by capable persons.

The bishop concluded his homily by encouraging the congregation to participate actively in the events of the Holy Week.