Recall that Patrick of Nigeria lost via Ippon to Nathon Burns of Northern Ireland in the 66kg Men’s Judo event at the 2022 Commonwealth Games in Birmingham.

Patrick told newsmen that he gained a lot of experience beyond the National Sport Festival and National Championships.

He said his opponent at the recently concluded Commonwealth Games invited him to the Dojo he trains for more training time. 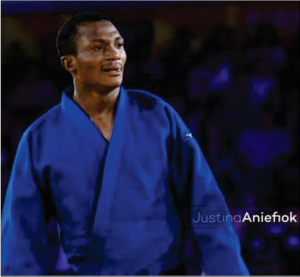 He said, ‘This is my first Commonwealth Games since I began Judo; I was a little nervous about it and at the same time prepared for it. It was quite unfortunate I lost my fight by a hold down (Ippon), though not what I planned but this a step forward for me. I promise to come back better and stronger than anyone can imagine.

‘The Commonwealth Games impacted my career positively through the equipment and facility. I have made new friends’ home and abroad; the guy I lost too invited me to his Dojo to train with them and I have also gained experience beyond National Sport Festival experience. It is a great one for me and this is a stepping stone to a greater height for me.’

Patrick revealed that he is working extremely hard to qualify for the Paris 2024 Olympic but must attend the IJF World Championship in Uzbekistan in October and many others.

‘My next goal is to qualify for the Paris 2024 Olympic which is the major goal of any elite athlete. The journey to Paris, France begins from the coming IJF World Championship in Uzbekistan by October, the Abu Dhabi Grand Slam in UAE to mention but just a few. These will help me gain experience and also build my confidence with great quality’, he added

He explained that one of the major challenges faced before the Commonwealth Games was lack of international exposure adding that the President of Nigeria Judo Federation, Musa Oshodi sacrificed a lot in terms of longevity of local camping.

‘One of our major challenges before the Commonwealth Games was lack of proper preparation and exposure to international tournaments, even though our president sacrificed a lot to see that we had adequate camping time.

‘I am sure things will be different for the African Games because I learnt plans have been set aside for the team to attend several international tournaments. The gains of more exposure and experience will rub off on all Judokas and Nigerian Judo will surely make the nation proud.

‘The African Games is next year; I can assure you that the Nigeria Judo Federation will start making the Nation proud even before the All African Games, the nation should stand on alert to hear good news,’ the Judo Fighter said.