The Catholic Men Organization of St Michael’s Catholic Church,Akwaeze ,Anaocha, L.G.A, Anambra State ,on Saturday February 9th 2019, made history with the first ever maiden C.M.O Convention in the Parish. The Convention which was an opportunity for the Catholic Men to deliberate on how best they would contribute to the family, Church and societal development had impressive numbers of Catholic Men in attendance. The event which featured fundraising in support of the C.M.O project and the installation of H.R.M Igwe C.N Okpala as the Grand Patron, Chief Sir Ikenna Okafor, Chief Prof Basil Eze and Nze Law Ifebueme, all as the parish C.M.O patrons.

In his homily, the Chaplain, Awka Diocesan C. M.O, Rev Fr Jerome Okafor who based his reflection on the Saturday readings advised all, to accord respect to their leaders, saying that God gave them the authority to lead his flock. He stated that God made a promise to Abraham which he fulfilled, noting that all who are called to serve God needs the grace of God to lead. He advised Parents to always watch out the activities of their Children rather than chasing materials things. He maintained that out of carelessness of the parents many children had gone astray due to lack of good morals from their parents. He urged the fathers as the heads of the family to take full responsibilities so as to teach the younger generations the ways of God. Fr Okafor advised them to set a standard so that the upcoming generation would follow their foot steps.

In his vote of thanks, the Parish Priest, St Michael’s Parish, Rev Fr Damian Ogwatta thanked God for his mercy; He also appreciated God for the first maiden C.M.O Convention which was the first to be held in St Michael’s Parish Akwaeze. He commended the planning committee led by the C.M.O Chairman Mr Sunday Okafor for his efforts toward the actualization of the event.

In a chat with fides, the Priest in Residence, Rev Fr Prof Boniface Obiefuna, stated that St Michael’s Parish Akwaeze was the first parish to organize the C.M.O Maiden Convention in Awka Diocese. He advised the men to be themselves, not to be suspicious of one another and also to have the spirit of accommodating. He reiterated that the father was the pillar of the house, saying that if the pillar was weak, then the family would be affected. He maintained that so many youths have joined one to cult and one secret society or the order and have become threats to the family and society at large.

Also speaking, the traditional ruler of Akwaeze, H.R.M. Igwe C.N Okpala (Ezennebo 111 of Akwaeze) stated that the C.M.O. Maiden Convention was one of its kinds because its enables the fathers to know their responsibilities in their families, saying that peace and harmony starts from home. He advised the parents to bring their children closer to God and also give attention to the activities of their children, saying that the world was no longer a safe place.

Cross section of C.M.O Members during the event 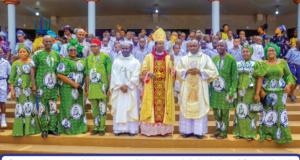 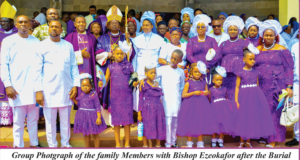 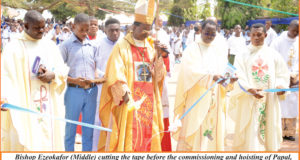