Power intoxicates. Wonders shall never end. It seems like a dream, but it is a reality. Recently, a powerful pastor in Gambia imitated the mystery of Jesus Christ’s death and resurrection after three days in the tomb. The pastor in question asked his followers to bury him alive and promised to rise after three days. He convinced them beyond reasonable doubt that he would surely rise.

Thus the gullible followers dug a six feet deep grave. After performing some magical shows and saying some vocal prayers of incantation, the pastor jumped inside the grave and lay down with his face downwards. He commanded his adherents to hurry and cover him with sand and he would surprise them in three days’ time. As the sand was falling on his back, he was singing praises.

On the other hand, his wife and three children and some of his followers were crying profusely. If not for anything, the tears showed that they would miss him for three days; if not for ever. When the sand heap became heavier, his praises were silenced. After filling the grave to the brim, the adherents stayed around the grave and hopefully waited for their pastor’s promised resurrection in three days’ time. They remained there fasting, praying and waiting for the wonderful miracle of all miracles to occur.

On the third day, the followers were eager to see the wonders of all wonders. From morning to evening, they saw nothing. Then it was dusk. Hopefully they waited till midnight on that third day. No sound was heard nor any sign perceived. Early in the morning on the fourth day, their anxiety diminished. Fear of the unknown ceased their bodily metabolism. On the fifth and sixth day, they lost hope. 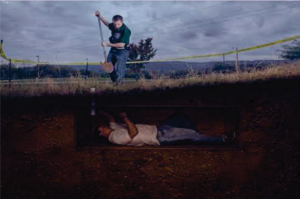 On the seventh day, they were filled with tears and hopelessness. All hope was lost on the eighth day. They were no more comfortable. Hence they decided to dig open the grave and see for themselves. As they were digging deeper, they smelled foul and were uncomfortable. Lo and behold the pastor they buried alive has died and was decomposing with alacrity. The odour became deadlier. They all covered their faces with face masks. Finally the pastor’s corrupt body was exhumed. The moths and soldier ants were already celebrating over his remains.

The pastor’s family, friends and adherents were thrown into deep mourning. Tongues started wagging. How can a mortal and sinful man claim such divine power of resurrection? Indeed, it was the disappointment of the year in Gambia. In actual fact, the Messiah the stupid pastor imitated was not buried alive.

The biblical account tells us that Jesus Christ was crucified, died and was buried. To the glory of God, Jesus resurrected on the third day. Many people concluded that the overzealous pastor committed suicide. What would he tell God? We shall know his fate on the actual resurrection day. Till then, let’s keep our fingers crossed.

Please do not hurry to dig my own grave and bury me alive like the unfortunate overzealous Gambian pastor. I am a Nigerian pastor of the Holy Catholic and Apostolic Church. A pastor is a shepherd of God’s flock. A pastor is a priest; but not all priests are pastors. This is a topic for another day. Let me drive my point home for today.

‘Bury me alive’ is a contextual concept. Persons of timber and caliber in our society talk of befitting burial for their departed loved ones. Often, such departed ones lived unbefitting lives. Therefore, it is more befitting to accord our dear ones befitting life. This is what I mean by ‘bury me alive’. If you know those precious things you would do or offer during my burial and funeral ceremonies, when I might have passed away from this physical world, kindly do them or offer them to me while I am still alive.

What is the essence of killing a cow for me at my demise? Does a dead man eat meat? There was a wretched young man who died within my vicinity. His kindred men insisted that the deceased family must provide a fat cow to be slaughtered for him as a mark of befitting farewell. Could you believe that the deceased never slaughtered a fowl when he was alive? Not even someone did it for him all the days he lived.

Often the kindred instead of helping poor bereaved family, they rather crucify them. Death becomes an occasion to extort the living. At times they insist that all members of the bereaved family including the child in the womb must make financial clearances before the departed can be buried.

Sometimes the deceased died of thirst. What do we see during his burial and funeral ceremonies? A cold van is stationed in the compound for days. Assorted drinks are served to the guests, right from the digging of grave. When I shall die, I will make sure that I am buried with koboko cane, so that I will appear suddenly from my grave and flog mercilessly those making merry with drinks while I died thirsty.

A certain deserted man died with sighs and regrets. At his graveside the wealthy son, who forsook him when he was alive, was reading the funeral oration of his late father. He was extolling his late father and promised to immortalize him by building a bungalow in his name.

The late father being immortalized lived and died in a wretched mud house. At this point in the oration, an unseen hand slapped the son reading the oration. It was a heavy slap, which dismantled the son’s dental formula. He fell down and blood was oozing like water from his mouth. Everyone ran helter-skelter. The funeral oration ended abruptly.

If you know those bags of rice and foodstuffs you will present at my burial and funeral ceremonies, kindly present them to me now that I am alive and hungry. The first Corporal Work of Mercy stipulates: “To feed the hungry.” It never says, “To feed the dead.” What is the essence of coming to pay condolence visit to my family at my death with assorted foodstuffs, when I died of hunger? Bring those foodstuffs to me now, so that I can eat and live longer. If you do otherwise at my death, I will deal with you from the world beyond. I am not joking.

Another number in the Corporal Works of Mercy says, “To visit the sick.” How many times have you visited the sick around you including those in hospitals? How often do we devote time to stay with our dear sick and elderly ones? It is beneficial to visit the sick at home or at hospital than to visit the dead in the mortuary.

Sometime ego somewhere, I went for a sick-call. It was the case of an elderly sick woman. She was dying in tears because none of her seven well-to-do children visited her for the past one year. She was left at the mercy of a paid caretaker. When she eventually died, the seven children came home to give her befitting burial and funeral.

Not long ago, a certain man organized a befitting birthday ceremony for his aged father.  In clear language he stated, “Papa, I am burying you alive.” The aged father smiled and replied, “My son, I am happy. You have instilled more life in me today. Nonetheless, I am not in a hurry to die. But instead of you to die before me, let God take my life soonest.” Both father and son embraced each other with tears of joy. Please let us bury one another alive from biological, to social homes.