Few days ago, I went to bed in the state of normality. Unfortunately I woke up abnormal. I had a very bad dream. In fact I was tormented in my sleep by unseen evil hands. I screamed heavily. I couldn’t run. My entire body system was paralyzed. However, I shouted unconsciously,

“The devil is a liar!” Confusedly, I rose from my bed. I knelt down weakly and prayed that God may take control. At last I washed my face with a cup of Holy Water and regained consciousness as well as strength. Immediately I jumped up and exclaimed, “Praise the LORD!”

It was terrible. My body was shivering. I was lost in fear of the known and the unknown. Indeed, I have never seen someone like this. The dream was all about a gigantic and evil-incarnate woman. She is married to a certain useless man. The marriage produced thirty-six ailing children. 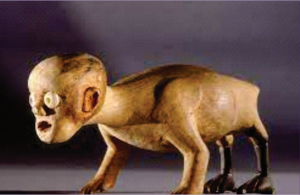 The woman is the wife and mother of all evils. She is now 62 years old. Hence she is notoriously called Bundle of Atrocities (BOA). She specializes in criminality. Her husband is also a criminal mogul. Among her children are armed robbers, terrorists, bandits, cyber criminals, thieves, prostitutes, homosexuals, lesbians, kidnappers, murderers, cultists, squanderers, smugglers, wickedness, idiots, corruption, etc.

Incidentally, the birthday of the above notorious woman coincided with the 62nd Independence Anniversary of our country Nigeria. What are we celebrating? Many believe that we have nothing positive to celebrate, except that some of us are still alive by chance. Many have gone to their untimely graves due to bad leadership, hardship, hunger, anger and insecurity. In the better old days, Sunny Okosun sang: “Which way Nigeria? Which way to go? After many years of Independence we still have a long way to go. How long shall it take us to reach the Promised Land?” Oh, the prophetic musician is dead.

How I wish God would allow him for a brief moment to come to Nigeria from the land of the dead and see how worse things have become in his fatherland. Like Moses, Sunny Okosun died on the way to the Promised Land. Who is the Nigerian Joshua that will lead us into the long awaited Promised Land?

Our country Nigeria at 62 is wallowing in bundle of atrocities. At creation God blessed Nigeria with abundant human and natural resources that can give succor to the citizens all the days of their lives.

Unfortunately, those God-given resources have been mismanaged through bad leadership and corruption. Monkeys continue to work while baboons consume the produce. The rich get richer while the poor get poorer. We are languishing in the midst of plenty. How can Obiageli (Fortune) die of hunger? Poverty and greed are the root causes of the present high rate of crimes in our country Nigeria.

I went home recently. My mother narrated to me the ordeals happening in my town. The unusual is happening now live. I lived at home with my grandmother for many years. In those days I never heard, nor seen whereby thieves steal maize, yams, cassava and other crops from people’s farms. It is happening nowadays. As hunger is mesmerizing the poor masses, how can they afford hiring security men to watch over their farms by day and by night? The idle ones now reap what they did not sow.

My Igbo people say, “Okenye nokata n’ulo, o rie nri e doweere umuaka.” This means that an idle mind is a devil’s workshop. What do we expect our university students who have been idle since February this year due to the ASUU strike to be doing? Many of them have graduated in criminality. When will the empasse between the Federal Government and the University lecturers be resolved? Where two elephants are fighting, the grasses suffer.

Criminality has eaten deep into the fabric of Nigerian society. The shedding of innocent blood is now the order of the day all over the country. Kidnapping and killing for ransom have become daily lucrative business. Travelling by land within the country is currently as dangerous as going to hell on foot.

Terrorists, bandits, known and unknown gunmen have taken control of governance. The Federal Government has failed in her primary role of protecting lives and properties of the citizens. It is clearly evident that everyone is left to his or her own fate. Insecurity has paralyzed the whole country.

A hungry man is an angry man. Which one is preferable: hunger or anger? The two go together. Subsequently, many sane Nigerians, especially the youths, have vowed to take their destiny into their own hands. All are shouting, “Enough is enough!” But enough cannot be enough if we do not exercise our right of franchise. It cannot be enough if you are eligible and do not have Permanent Voters Card (PVC). He or she who sells his PVC sells his or her conscience. Vote buying and vote selling are twin crimes.

We must vote and defend our votes come 2023. The Independent National Electoral Commission must be truly independent. She must be trustworthy and shun all electoral vices. The electronic transmission of election results must be sacrosanct. Manual collation and manual transmission of the results are the bedrock of rigging and false declaration of winners. Election rigging by whatever means is the bane of criminality. Just imagine what happens when a criminal is at the helm of affairs at the state or federal level.

During the reign of Pontus Pilate, he presented two candidates to the Jews to choose from: Jesus Christ (the Saviour) or Barabbas (the Criminal). Blindly, the corrupt Jews preferred Barabbas. Due to wrong choice, the Jews are still suffering from the adverse effects till today. The campaign for the 2023 elections has begun. Some saving-minded candidates and some criminal-minded candidates are out to campaign for political offices at the state or national levels.

We must get it right this time around by opening wide our eyes and make the right choices. At the Presidential level, we must vote for the Saviour rather than for the Criminal. By their fruits and antecedents we know them. We need the Joshua of our time to lead us Nigerians into the Divine Promised Land. If we get it wrong during the Presidential election, come February 2023, then we shall suffer from bundle of atrocities in the years to come. By then the center will no longer hold. It will be to your tents, oh Israel! A stitch in time saves nine.

In essence, if God does not watch over the city, the efforts of the watchmen are in vain. Therefore we implore the intervention of the Almighty God to see us through in 2023. Man proposes. God disposes. May God dispose the efforts of those who are planning clandestine evils against the 2023 Presidential Election! Amen!!!
SEE MORE