The colonial leaders of Nigeria before independence include:

Nigerian leaders from 1960 to date include: 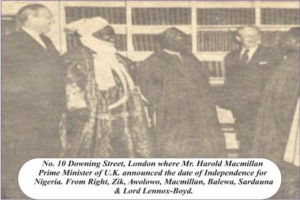 In 1898 Nigeria was named Niger Area by Flora Shaw which later was modified as Nigeria in 1945. In 1906, Federal Capital Territory (FCT) of Nigeria was re-located from Calabar to Lokoja. Then it was later relocated from Lokoja to Lagos and finally in December 12, 1991 to Abuja. Lord Luggard is the 1st Governor-General of Nigeria and has his base at Lokoja. Monument is still there at Lokoja close to Niger-Benue Rivers Confluence. This writer Livinus Nnebedum on his trip to Abuja in June 2010 saw Lord Luggard House well preserved as Historical and tourist centre.

Nigeria is surrounded in the North by Niger Republic, in the South by Atlantic Ocean, East by Cameroon and West by Republic of Benin (Diahomey). The longest distance by Air from East to West is 1,300 kilometers (KM) and the distance from North to South is 1,100 KM.

Nigeria is a member of many International Organizations to mention but few viz: ECOWAS, A.U. (formerly OAU), etc. Thus Nigeria is recognized in West Africa Regional Politics, Continental African Politics and in world politics internationally. But a lot of home work needs to be done for good reputation. There is need to rebuild the image and characters of Nigerians at abroad and home. Nigeria has achieved political Independence from Colonial Rule that is, from Britain, but are we Economically Independent?