Breaking a Few Eggs to Make an Omelette, the Soludo Way

I still remember this day vividly. We had been invited to accompany Peter Obi, then into his first few months as the governor of Anambra State, to an erosion site near the Omagba area in the commercial hub of Onitsha. Just beyond one lane of the road, we could see a house hanging precariously on the edge of an erosion-eaten ground. We learnt it had happened two nights before and the residents had fled in terror.

A little crowd had gathered when they saw it was ”government people” that had come to view the place. Behind us, the traffic going to Onitsha kept passing. I noticed one thing though: some of the occupants of the commercial vehicles were abusing Gov Obi as they passed, with some even mimicking his effeminate voice.

They were trolling him for ”doing nothing” since assuming office as governor. It did not matter to them that Obi had just assumed office and trying to settle down. As they passed and trolled him, I kept throwing pitiable glances at Obi but he appeared unperturbed.

It was when people were still hailing Senator Chris Ngige as a hero. Ngige had just been thrown out of office by Obi who had resorted to the courts to reclaim his mandate after almost three years. I still remember Obi telling those who cared to listen those days that he was not in government house to compete with anybody.

Yet at another time, during a media interaction, I remember asking him why he seemed to be taking a lot of time in going into action. His trite answer was that where he came from, if anyone was given five minutes to cut a tree, the person spent four minutes sharpening the axe so that when he struck at the tree, it would fall down immediately. To us, he seemed to be speaking in riddles and we believed that perhaps he had not known what problems he was about creating for himself.

However, with the benefit of hindsight many years later, we can see that Obi knew what he was doing, as the history of the state until now rates him as the best governor. But being best governor did not come easy. It involved Obi taking some hard decisions initially which threatened to pitch him against the people but which eventually paid off and made him a hero among those very same people.

What Obi went through then is akin to what the current governor, Prof Chukwuma Soludo, is going through today. Soludo has just assumed the mantle of government amid serious problems such as insecurity, empty coffers and collapsed road infrastructure.

These are things that need time to tackle; even as the new helmsman settles on the job, finds his bearings and readies to go into action. But many people out there who do not understand the workings of government are already calling for the governor’s head, same man that only a few months ago, they had massively voted for as the one that would lead them to Eldorado. 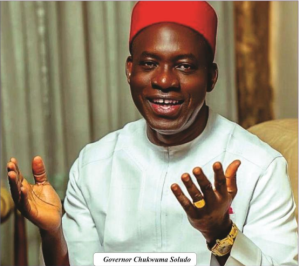 So what has changed? Is the man they voted for no longer the man they see today? Has Soludo told anyone he has suddenly become bereft of ideas? I’m not aware that any of the above has happened. But then, I understand that it is in the nature of our people to be finicky in their expectations and that is why when I see how people expect the fortunes of Nigeria to change with the wave of a hand under Peter Obi as the president I laugh at their ignorance. Indeed, the problem of Nigeria today can hardly be changed by anyone in the first tenure but we shall come to that on another day. Let’s go back to Soludo.

Like Nigeria, the problems of Anambra are enormous as virtually all the gains recorded in the eras of Ngige and Obi were lost during the immediate past regime. Yes, we may have gotten an airport and a stadium – very beautiful projects; but they have only managed to scratch the surface as they say. The fact remains that Anambra, as of today, is in deep financial shit, with critical institutions tottering on the edge of collapse. Even the security problem alone which the Soludo administration is tackling is enough to derail a government.

We are not even talking about the road infrastructure which has since collapsed. To drive around the state now gives no joy and the people who are in business right now are auto spare parts dealers and the auto mechanics. That’s as bad as things have become.

Then you have the humongous issue of refuse which has seen the state having mountains of garbage in most streets. This is even as the budget of the state has not been approved; a state that the last regime threw into a debt of over N200bn. So how does anyone expect Soludo to hit the ground running? From where will he get the money to kick start his ideas? Assuming he knows how and where to get it, it is still something that will take some time.

Even before he assumed office as governor, he had promised to start from Onitsha; Okpoko precisely. He wanted to quickly put his signature on Okpoko and then move to tackle the garbage problem. This was how he moved into the Fegge area of Onitsha with a view to bringing sanity to the place which has remained like a glorified shanty. And so one of the victims happened to be popular pastor, Chukwuemeka Ohanaemere, a.k.a. Odumeje, parts of whose church structures were affected.

Now, Odumeje and others who have buildings in that place were given three months’ notice to remove their structures that were obstructing the free flow of water. But Odumeje chose to ignore the service. But when the government came to demolish the structures causing problems, Odumeje stormed the place and did some drama which made waves in the social media, beclouding the main aim of the exercise. Many attacked the government for its insensitivity.

The dust is still trying to settle but it is the price Soludo had to pay for trying to do the right thing. While some were and are still berating him, I will rather hail him for his determination to insist on the right thing. Even two Catholic parishes are affected in the ongoing demolition and Soludo is a Catholic. He did not baulk at doing the needful because of fear of recriminations. He was just focused on what he intended to do.

It was same way he tackled the insecurity issue by brutally taking the battle to the hoodlums and their sponsors and he is winning. This is why I keep saying that governance is not for ”nice” people. In fact, such people hardly succeed, especially in such a place as ours where one has to shout, shove and punch to get things going.

Anambra has been the most difficult state to govern right from creation and the one man who found that out soon enough was former Gov Chinwoke Mbadinuju. A very good man, he proved too nice to deal with the hounds he created and was ultimately consumed.

Any wonder that the next two men who mounted the saddle (Ngige and Obi) succeeded because they were not too nice? They were very much in charge of their government and allowed no one to dictate to them. They took hard decisions and survived.

But after them came another Mr Nice in the person of Chief Willie Obiano. Like Mbadinuju, he was a jolly good fellow who did not want trouble. Very soon, those working for him found out and exploited his soft centre to make things difficult for him and they eventually overwhelmed him.

The result was the financial recklessness witnessed in his government that left the state indebted to the tune of over N200 billion and even led to Obiano suffering the embarrassment of being a guest of the Economic and Financial Crimes Commission, EFCC, for some days, while none of those who nearly ran his government aground was touched. Obiano managed to reach his safe haven in the United States and I’m not too sure he will be in any hurry to return any time soon to this beleaguered country.

It is now the turn of Soludo in the saddle and those who love to make things difficult for governors in this state are studying his body movement to know if he is malleable. But with what I’ve seen of Soludo so far, I think the rabble rousers are going to be disappointed and with the events of the past few weeks, I’m pretty sure they are getting the message.

For Soludo, the hard way is the only way and we’ve got to know that. However, while waiting at the table to be served our omelette, we can expect a few eggs to be broken. That is the way of things.