Few days ago, it was raining heavily by evening time. Despite the bad weather and the bad terrain in the area of my apostolate, I jumped into my vehicle for an important appointment somewhere. The flood flowing along the sandy road was like a river. I managed to drive through. Unfortunately, I came across a broken water-catchment pit situated at a T-junction.

The flood coming out from the broken pit was heavier. Consequently, I was confused where to put my tyres. I marched on the break and stood still contemplating. After few minutes, I devotedly made the Sign of the Cross and courageously started crossing through the flood at a presumed vantage point. Unfortunately, I miscalculated and got stuck in deep holes in the front and in the rear.

Thus my car was hung on protruded thick sands. The tyres became free and could not touch the ground. In other words, my car was suspended in the air with the flood flowing uncontrollably beneath. Prayerfully, I accelerated the throttle to see if a miracle can happen.

The flood flew into the air behind like a waterfall. The situation became worse. I was downcast. It was around 5.00p.m. I stopped the car’s engine and sat hopelessly inside the car. 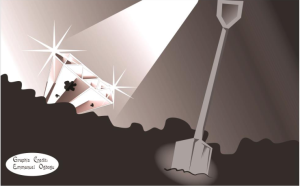 When the heavy rain stopped and flood was still flowing heavily under the car, I opened the door and came down barefooted. Luckily, I was wearing a shirt beneath my soutane (clerical gown) and a long short under. Then I pulled off my clerical gown. I looked up and down for help, but no one was around. I called one strong man from my parish to come to my aid, but he did not pick.

I spread my two hands prayerfully towards the direction of heaven and shouted, “Please God, help me!” I began patrolling around aimlessly. After some minutes, a young man and a lady on motorcycle came across. The lady came down from the motorbike while the man tried to drive alone through the flood. He ended in a deep. The clutch of his motorbike got broken.

He managed to pull the motorbike out of the deep. The lady attempted to cross on foot. At a point she was stuck in a deep. The man helped to pull her out. Afterwards the duo came to my aid. The three of us tried to push the car out, but all to no avail.

It was like pushing a house under a deep foundation. Mercifully, they stood by me for some time. By God’s grace more passersby came to my rescue. With more hands I thought that the problem would be solved. All our efforts became fruitless again. We were there till some minutes to 8 O’clock in the night. My helpers complained that they were tired and would go home.

They asked me to leave the car there and retire home. They concluded that the solution is for me to look for a towing van or tipper lorry the next day to pull the car out. I was not convinced because of the lonely place where my car was stuck. Thieves can vandalize it during that night.

Fortunately, two men on motorcycle drove to the spot and stopped. One of them is an expert in driving. He asked me to give him the key. I did so. He entered the car and started the engine. We all pushed from behind. It was an effort in futility. He stopped the engine and came down.

He stooped under the stuck car and visualized the problem. He asked us to wait awhile. He sped off in his motorbike and came back in a twinkling of an eye with a long shovel, which resembles the long spoon the inmates of hell fire use in eating as part of eternal punishment there. He used the shovel to dig out the thick sand on which the car was suspended. It worked. The tyres came down.

Then the expert entered behind the steering and started the engine. We pushed from behind. Lo and behold the trapped car came out. All shouted, “Thanks be to God!” The joy that filled my heart at that night was overwhelming. It was some minutes after 8.00p.m. I imparted heavenly blessing on the voluntary helpers and wished them well.

What is the essence of the above long real story? At last I understood that the trapped car was a blessing in disguise. God might have used it to prevent me from encountering something more dreadful. He might have saved me from a fatal accident or from the hands of evil men in this critical time of insecurity.

I asked myself: if this did not happen, who knows what else might have happened on that rainy evening? The lesson is that in whatever awkward situation we find ourselves, we should not despair. God knows the best.

The reminiscence of what happened to me during my boyhood is still fresh in my memory. During my senior primary and junior secondary days, I was almost a dwarf. People made mockery of me because of it. I was not at ease at all. I prayed to God to make me grow like my age mates who looked like palm trees while I looked like a stunted grass. It was while I was in class two in secondary school that my prayer was answered indirectly.

During that undergrowth period, I was brought down from Jos to my hometown to live with my grandmother. It was a very strenuous time. While my siblings were comfortably sleeping like babies in Jos, I was awakened as early as 3.00a.m to go to a very far farmland to carry yams or fetch water down a hilly stream.

Why should I not grow short? So, God answered my prayer indirectly in agonizing manner. It was on one fateful afternoon that I came back from school. After taking starchy lunch, I rested a while. Afterwards, I climbed a big trunk pear tree standing at a corner in my compound. Accidentally, I fell down and sustained serious head injury. Also, I entered into the state of unconsciousness for three months.

I was treated at Oko General Hospital and was later transferred to Jankwanu Specialist Hospital in Jos. During the three-month bodily and psychological sickness, I was well looked after. I was fed with nutritious food and drinks which had positive effect in my body metabolism. When I recuperated, I grew tall miraculously. Was my tree-fall accident not a blessing in disguise? To God be the glory!

In a certain motor park, a commercial bus was loaded with full passengers. One of the passengers excused himself to go and ease himself. The driver waited for him for some time and angrily drove off towards his destination. Later the passenger came back and was disappointed that the bus had gone without him. Painfully his luggage was in the bus. He was stranded and helpless.

He shouted, “O God! why?” God laughed at him for his little mind. The commercial bus on its way got a fatal accident. The driver and all the passengers died at the spot. The stranded passenger at last thanked God for saving him. His stranding was a blessing in disguise.

God’s ways are not our ways. His thoughts are beyond ours. When Reverend Father Peter Ebere Okpaleke, was appointed the Catholic Bishop of Ahiara Diocese, he was totally rejected by his clergy and laity. He became a shepherd without sheep for almost seven years.

Later, he was appointed the Catholic Bishop of the newly created Ekwulobia Diocese in Anambra State. The lingered episcopal crisis made Pope Francis to know him more intimately. Thus, the stone which was rejected by the builders was made the stronghold of the house.

When His Holiness was creating new Cardinals to fill the gap of the aged and departed ones, he remembered the rejected patient Bishop from troubled Nigeria. To the surprise of everyone, His Lordship Most Reverend Peter Ebere Okpaleke was appointed a Cardinal of the Holy, Catholic and Apostolic Church. His investiture with other newly appointed Cardinal comes up on 27 August 2022 in a Papal Conclave in Rome.

On 8 September 2022, the Birthday of the Blessed Virgin Mary, he will be accorded grand spiritual and social reception at Saint Joseph’s Catholic Cathedral Ekwulobia. Was his rejection not a blessing in disguise? Even though he is given a greater pastoral responsibility, it is worthy of appreciation, for God works in a mysterious way. If eventually His Eminence, Peter Ebere Cardinal Okpaleke, becomes the futuristic Pope, he will shepherd over the Flock of God in Ahiara Diocese and the rest of God’s Flock worldwide.

Every disappointed, they say, is a blessing. There is hope in hopelessness. The God that created the carnivorous lion will never allow it to eat grass. There is always light at the end of a tunnel. The Almighty God makes impossibility to be possible. Even when divine help does not come, we should never lose hope as far as we are alive. The worst sinner can still become the best Saint through genuine repentance. It is only in hell that all hope is lost.