It was a day of gloom and tears, Monday, February 15, as the Catholic Dioceses of Awka and Ekwulobia buried a total of four priests (two in each diocese), report Ifeoma Ezenyilimba and Precious Ukeje. 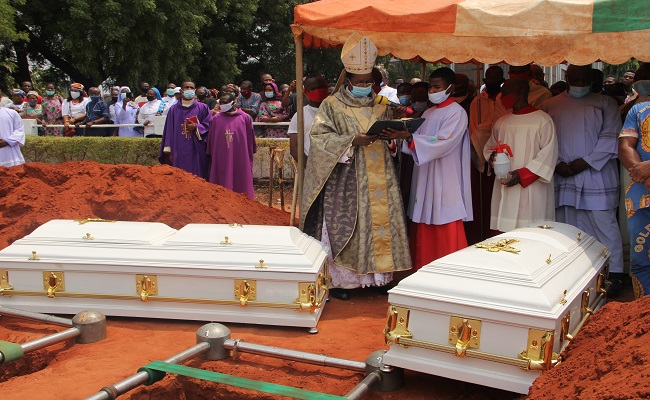 Msgr Akam, who died in a hospital in Abuja, on February 5, 2021, after 45 years as a Catholic priest, hailed from Uga, Aguata LGA, Anambra State. His co-papal chamberlain, Msgr Ezeokoli, who died at Regina Caeli Hospital, Awka, on February 10, 2021, after 44 years in the Catholic priesthood, hailed from Nkpologwu, Aguata LGA, Anambra State. 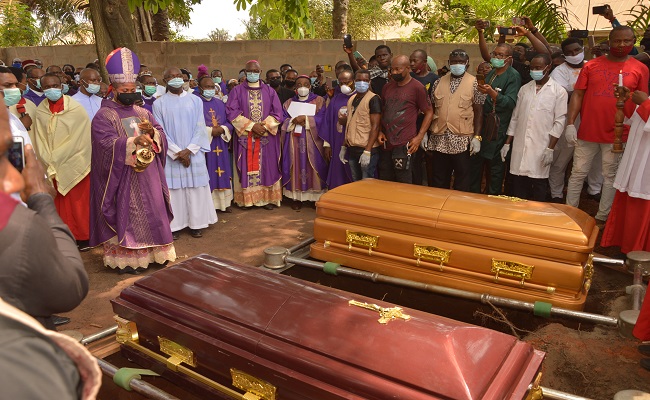 Rev Fr Oliobi, a graduate of Urban University, Rome, and a holder of B.A. English Language, from University of Nigeria, Nsukka, was ordained a Catholic priest on August 13, 1972, by Francis Cardinal Arinze, the then Archbishop of Onitsha. He was until his demise, a priest in-residence at the Awka Diocesan Priests’ Welfare Home, GRA, Awka. 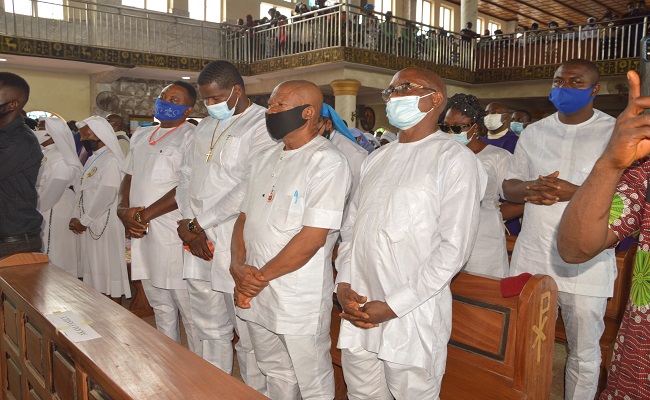 The late Msgr Akam was described by many as a father of people living with disabilities and one who had a soft spot for the poor. He was said to have had over 700 students as beneficiaries of his scholarship scheme at the secondary and tertiary education levels, and had also taken care of many people with disabilities, as well as built houses for the poor, among others, through his Voice of the Poor (VOF) Foundation.

Msgr Martin Ezeokoli, fondly known as “You See”, was ordained a priest on April 17, 1977. In addition to his many pastoral engagements, he also served as priest at Fegge Parish, Onitsha, 1977; Parish Priest,St Mattew’s Akpu Parish, 1977-1979 and Parish Priest, St Peter’s Parish, Aguluezechukwu. He was on a mission in Austria from 2008-2012.

Tears of the visibly saddened mammoth mourners greeted the burial of the priests.

Leading in the concelebrated burial Mass for his two late priests at St Patrick’s Cathedral, Awka, the Catholic Bishop of Awka Diocese and chief mourner, Most Rev Paulinus Ezeokafor, thanked God for the life spent by the late Frs Akpu and Oliobi, who, he said, served the Church in several capacities and were committed to their priestly duties.

In the concelebrated burial Mass for his two priests at St Joseph’s Cathedral, Ekwulobia, the Bishop of the Catholic Diocese of Ekwulobia, Most Rev Peter Ebere Okpaleke, in his homily, described the four late priests as those who shared not only in the sacred ministerial priesthood, but also in the formation of the young ones. 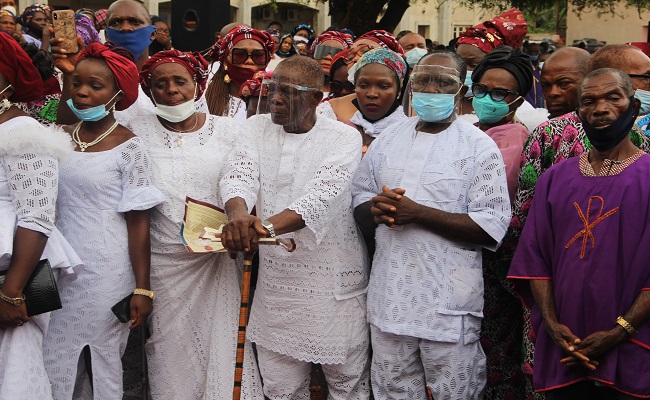 Bishop Okpaleke eulogised the late Msgr Akam as a man of rare intelligence whom God used to touch many souls. According to him, Msgr Akam had through his Voice of the Poor Foundation built many houses for the poor, picked the bills for marriage ceremonies of over 20 poor couples, gave scholarship to over 1000 poor students and provided homes for the physically challenged.

The Catholic prelate praised the late Msgr Martin Ezeokoli’s commitment to the growth of the Church, describing him as a worthy collaborator in priestly formation. He noted that the deceased, while alive, fostered formation to the Catholic priesthood through the Society of Catholic Apostolate, otherwise known as Pallotine, which he formed in Awka Diocese. He added that the support which Awka Diocese enjoyed from MIVA Austria and the presence of priests of Old Awka Diocese in Austria, were championed by the late Msgr Ezeokoli.

Bishop Okpaleke equally lauded the late Nkpologwu-born priest as one who was outstanding in catechesis, both as a former Director of Youth Movement, Old Onitsha Archdiocese, and Director of Catechesis, Catholic Diocese of Awka.

Both Bishop Ezeokafor and Bishop Okpaleke condoled with the bereaved families and the Catholic communities of the four priests, and prayed for the happy repose of their souls.

In his homily during the Mass at St Patrick’s Cathedral, Awka, the Director, Nazareth Formation Centre, Isiagu, Rev. Fr Joseph Nwosah, advocated for a life spent in close relationship with Jesus Christ for all. He advised the people of God against wallowing in sin with the notion that the Sacrament of Confession would purge their sins.

Rev Fr Nwosah, who was a class mate of the late Fr Akpu, called for true repentance and obedience to the will of God, urging all to abhor in totality, things that displeased God. 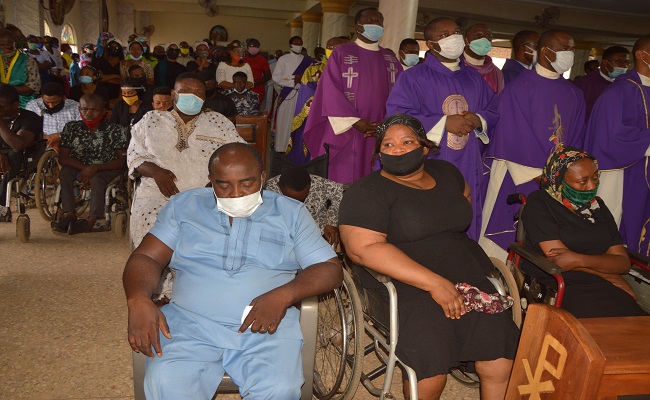 Some of the people living with disabilities, who the late Msgr Akam provided home and succour for at Villa Misericordia Dei, Uga, at the burial Mass of their benefactor, St Joseph’s Cathedral, Ekwulobia, Feb 15, 2021.

Awka Diocesan Presbyterium, in a funeral oration that was signed and read by the Assistant Secretary, Rev Fr Cyril Chibuzo Ezeani, described the death of the late Frs Akpu and Oliobi as sudden and devastating.

The presbyterium, in the oration, described Fr Akpu as a role model spiritual director who inspired seminarians.

In the oration, Fr Oliobi was described as  human, humane and humanly humorous, and his life reflected humanity and holiness.

‘Rev Fr Oliobi was a man of peace and God fearing, always had a welcoming smile for everyone; was very appreciative, considerate, diplomatic and selfless. He never complained about any discomfort, no matter how uncomfortable he was,’ as noted in the oration, citing a testimony about him on Page 2 of Fides Newspaper, January 31- February 6, 2021 Edition.

Ekwulobia Diocesan Presbyterium, in a funeral oration signed and read by the Secretary, Rev Fr Modestus Anyaegbu,  noted that the late Msgr Akam was a man of faith who understood and lived out the fact that priests were meant to serve others.

The presbyterium, in the oration, eulogised the late Msgr Ezeokoli as one who was a good man and then a priest, who struggled with the human element and rose to the height of generosity and selfless service to people he encountered in his life and vocation. According to the oration, Msgr Ezeokoli was a man who loved his brother priests and who used his connections to open the European waterways for his priest colleagues of Old Awka Diocese.

His Eminence, Francis Cardinal Arinze, in his condolence message to Bishop Peter Okpaleke over the demise of his two priests, described their death as great loss which laid a heavy cross on the bishop, the priests and the entire Catholic Diocese of Ekwulobia.