It was indeed a great excitement and celebrations galore among the teeming Catholic faithful across Anambra State and beyond when the news faltered through that  the Bishop of Ekwulobia Diocese Most Rev. Peter Ebere Okpaleke had been appointed a Cardinal among twenty Archbishops and Bishops recently elevated to the highly revered position of Cardinal ( Prince of the Universal Church) by the Catholic Pontiff, Pope Francis.

It would be recalled that Bishop Okpaleke after his episcopal consecration as the Bishop of Ahiara  Diocese in 2013 following the sudden demise of his predecessor late Bishop Victor Chikwe of blessed memory, the entire clergy (Priests) and the lay faithful  of Ahiara Diocese outrightly rejected him as their new Bishop and Chief Shepard of the Diocese on the primordial sentiment that he was not one of  their own and demanded that Bishop Okpaleke be sent back to his home state, Anambra. The entire priests and laity  had treated him as a pariah and persona non grata and his life even came under serious threat.

The rebellious, obdurate and misguided priests goaded on by the gullible and uninformed laity of Ahiara Diocese had the effrontery or audacity to challenge and undermine the authority of the Catholic hierarchy , the Vatican and which had compelled the Vatican to issue an ultimatum to the recalcitrant and self serving priests to promptly apologize to the Papacy for their rebellious and ill-motivated action. 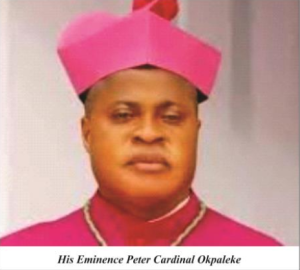 Consequent upon the lingering crisis in Ahiara Diocese the Vatican in its wisdom later created the new Diocese of Ekwulobia and subsequently appointed Bishop Okpaleke as its pioneer Bishop and who was inaugurated on 29th  April 2020 upon his earlier resignation as the Bishop of Ahiara Diocese in 2018 due to the sad development in the crisis-torn Diocese.

It is a sad commentary therefore that after about nineteen long years, when Bishop Okpaleke was first  installed as the Bishop of Ahiara, the Diocese. has remained desolate without a Bishop  to Shepard its flock except the periodic visitations by the Apostolic Administrator  from the neighboring Umuahia Diocese charged with the responsibility to oversee the affairs of the Diocese This is obviously an extremely embarrassing, disturbing and unprecedented  situation not only to the belligerent and unrepentant priests and the lay faithful of Ahiara Diocese but the entire  Catholic Community in Nigeria and beyond.

The question on the lips of many right thinking Catholic faithful and indeed Christendom at large is what have the recalcitrant and rebellious priests and their blind followers gained in the whole episode of madness and intrasigency? even as their rigid and uncompromising stance has not changed ever since except the dishonour and terrible stigma they had brought upon  themselves and the already battered image of their Diocese even as their names  had been recorded in the hall of shame of the universal church.

The myopic and rebellious priests and their co-travellers were obviously blinded by unbridled hate, pride and arrogance and their rather bizarre and ungodly behaviour would certainty continue to hunt their individual consciences all through their life time.

Bishops Okpaleke”s worthy elevation to the eminent position of Cardinal  had clearly demonstrated that patience, resilience, humility love and absolute faith in God Almighty could lead to a rejected stone turning to be a corner stone in the end even as His Eminence Cardinal Peter Okpaleke has now become a precious corner stone at the highest echelon of the universal church, the Holy See and the Seat of St Peter.

As His Eminence Peter Cardinal Okpaleke prepares to receive his papal investiture at the Vatican, we wish to heartily congratulate His Eminence and wish him God”s continued protection, guidance and divine wisdom on his new appointment as a worthy member of the August body  “the College of Cardinals,’ Amen.