As killings of human beings and destruction of public property continue to ravage various parts of Nigeria, the Bishop of the Catholic Diocese of Ekwulobia (CADEK), Most Rev Peter Ebere Okpaleke, has sued for an end to insecurity and bloodletting, which he said, have hindered the progress of the country and its citizens.

Bishop Okpaleke, who gave the charge in his homily of the concelebrated burial Mass for the late Lolo Helen Kanelechi Dimewuzie, at St Paul’s Catholic Church, Uga, Aguata LGA, Anambra State, on Saturday, May 21, condemned the rate at which insecurity had made mess of human dignity in Nigeria. 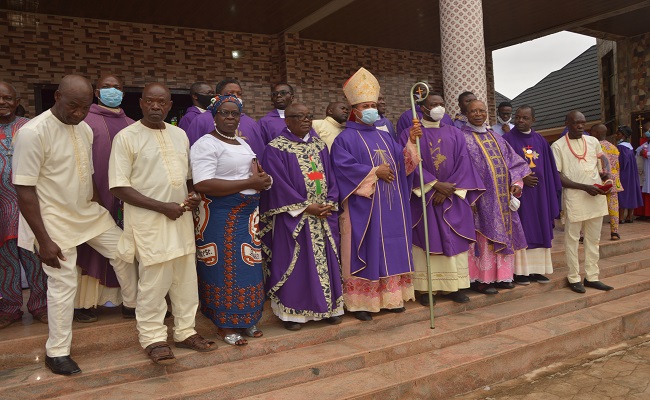 The Bishop of the Catholic Diocese of Ekwulobia (CADEK), Most Rev Peter Ebere Okpaleke (centre, front), with concelebrants and some members of the bereaved Dimewuzie Family after the burial Mass. The bishop is flanked on his left by the bereaved Rev Fr Augustine Chijioke Dim, and on his right by the Priest in-residence at St Paul’s Parish, Uga, Rev Fr Prof Pantaleon Umechukwu May 21, 2021.

The bishop condemned the increased cases of banditry, Fulani herdsmen’s attacks, kidnapping, attacks on policemen, bombing of public property by armed hoodlums and persistent waste of human lives in the country. He insisted that there was an urgent need for the government and leaders at all levels to address the menace.

Citing the gospel of Luke Chapter 8:1-3, the Catholic prelate emphasized what he described as the duties of mothers in the family, Church, nation and society at large.  The bishop charged women, who he described as ambassadors of Christ, to rise up to their responsibilities and ensure that peace, progress and love were restored in the families and the country.

According to him, God, who endowed the women with special grace, had called the female members of society to come up with ways to re-orientate the masses on how best to tackle insecurity and put end to bloodletting.  The Catholic prelate charged all to take on their spiritual amour so as to wage and win the war against what he described as agents of darkness which had ravaged the country, especially in the northern and southern parts of Nigeria.

He enjoined all to go back to God, do that which were expected of them in society, and mobilize the angels and saints to fight for them in the spiritual realm.